Can a world of endless war and misery actually end up being funny? And how! 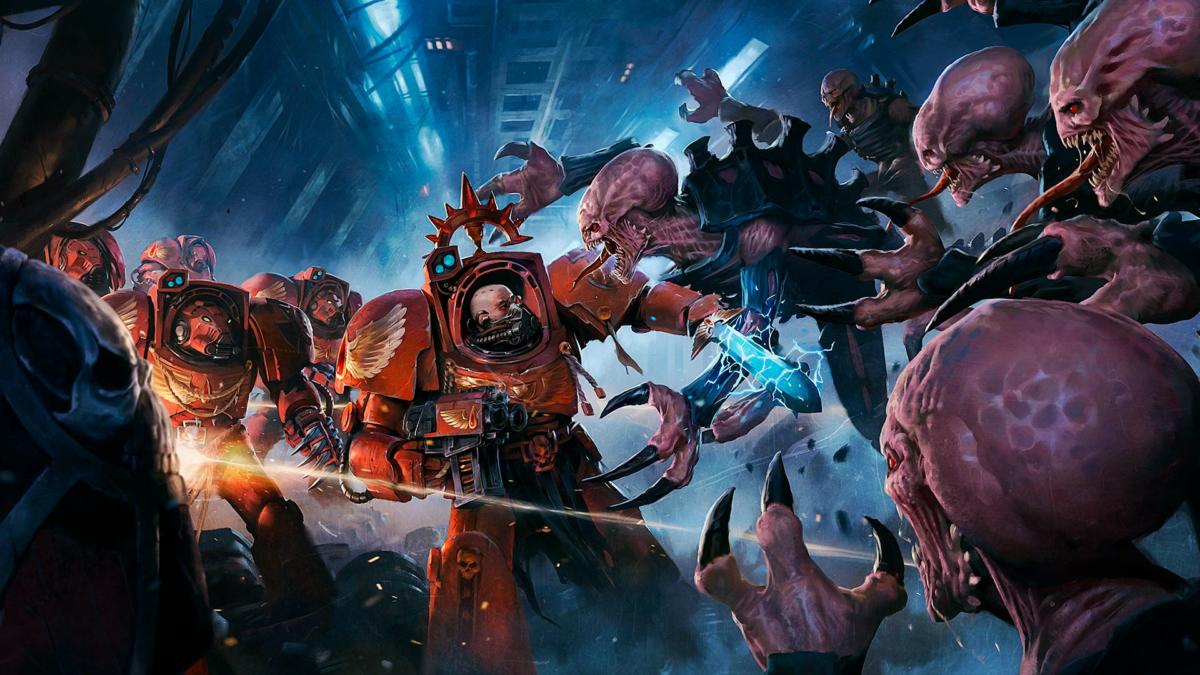 Warhammer 40,000 is known as one of those interminable tabletop games where you roll dice ad nauseam, or otherwise as one of those gung-ho properties full of bald men glowering as they blow aliens apart. Well, neither of those are wrong, but the thing is that despite all bleak appearances, there’s this irrepressible vein of silliness written right through the core of it like a stick of Brighton rock.

The best way to describe Warhammer 40K of course with an elaborate analogy involving Adam West’s Batman. When people talk about that, you’ll invariably be treated to something along the lines of ‘oh, it’s a campy, wacky, relic of the 1960s’, or other words to that effect. There is this pervasive underlying idea that it is something unintentionally funny, that whoa, they must have been smoking so much dope when they came up with that, bro, it’s just so silly…

The thing is that at the time, everyone – including West himself – was well aware of the silliness of what they’d made. Nobody could have written, blocked, and shot a scene where Batman is busted for drunk-driving (and then hands over his keys because he recognises he’s in the wrong) with a straight face. So the question, really, is why would anyone think they did?

(I have similar thoughts about ‘wacky’ foreign imports – the Japanese are not stupid, they weren’t at home watching Takeshi’s Castle thinking ‘hmm, yes, this is completely normal behaviour’.)

With Batman, it is somewhat forgivable. An awful lot of the comics, particularly when Frank Miller gets involved, take the whole concept of a man dressing in spandex and going out at night to scrap with mentally ill monomaniacs incredibly seriously – and of course it began as straightforward pulp noir. So when something’s willing to step back and have a bit of a chuckle, it seems like an aberration, as if they can’t possibly have meant to do that.

Confounding the issue is that, even as Cesar Romero painted his moustache white and devoured huge chunks of the scenery as the Joker, there was a tiny veneer of playing it straight. In more modern productions there is, usually, some kind of wink or nod to the audience, as if to let them know it’s okay to laugh. But when West and Burt Ward puzzled out the moon-logic of what the Riddler was up to this week, they never actually corpsed, as much of a struggle as that must have been.

Warhammer 40,000 bears the same kind of poker face in dealing with ostensibly gritty material – but like the ‘60s Batman, it’s gossamer-thin. Take the introductory sentence, ‘in the grim darkness of the far future there is only war’, which could be merely bleak but given how it plays out in practice, just sounds desperately self-serious to the point of absurdity. (From that opening crawl, the more self-aware parts of the fanbase coined the phrase ‘grimdark’, to refer to bleakness being waved around like a foam finger.)

If you had to pin down Warhammer 40,000’s aesthetic, the only word could be ‘metal’ – scenes of ultraviolence and bulging blood-soaked muscles, heavy on ornamental leather, chains, and spikes. As if to give the game away, there’s a sub-faction whose whole thing is playing loud guitars, and Games Workshop’s in-house team of painters are actually called ‘Eavy Metal.

Like much of the metal genre, it resembles nothing so much as the fever dream of a hyperactive 13-year-old boy: loud, crude, and extreme with a capital X. Is this a slightly backhanded way of describing Warhammer 40,000? Not when it’s coming off my keyboard, since I once was that 13-year-old and I suspect much of the fanbase was too.

Of Warhammer 40,000’s various factions, some are more outwardly wacky than others, and here I mean the space orks. Their technology is based entirely on believing whatever device they have will work, à la Tinkerbell, and their economy is based on punching another ork in the mouth, collecting the teeth, and trading them for goods and services. As if this weren’t enough, they uniformly speak and act like British football hooligans.

However, even the more self-serious factions give themselves away as completely absurd if you think about it for five minutes. The Space Marines are all too clearly the result of a game of ‘yes, and’ that got off the rails: uhhh, they’re eight feet tall, and their guns shoot awesome explosions, and their armour’s practically impregnable, and they have two hearts, and they spit acid. The same, of course, all applies equally to their heel-mode counterparts the Chaos Space Marines, who boast the additional frisson that they’re in league with Satan (or, at least, Warhammer’s various Satan-equivalents). This, of course, being the only thing that could make them seem any more like the cover of a mid-period Dio album.

By contrast, the Imperial Guard can almost seem authentically gritty. They’re just grunts, guys who are pretty much like you or me, given some crappy mass-produced equipment and sent off to war. You could almost shed a tear – until, of course, you find out about the kind of tanks they use and the dial spins right back around to silly as you behold these huge, cumbersome beasts which very often serve double duty as cathedrals. Cathedrals, really? Oh yeah, the empire basically worships technology like some mysterious god, deal with it.

The tanks you might actually field on the tabletop are merely the tip of the iceberg. Delve into the lore and you’ll find incomprehensibly huge vehicles, and that’s another place where Warhammer 40,000 is outright absurd: the sheer scale of it. All the factions have their own oversized fighting machines, to say nothing of the planet-size spaceships with which they get over to the next battle. The empire of man is said to span a million planets with a population numbering in the trillions, and – well, there’s even a large number right there in the title.

But even when you zoom in things still get silly. You’d think with their space-age weapons and artillery there’d be no need for close combat – and you’d be wrong, with chain-swords (exactly what they sound like) in abundance, alongside straight-up swords which become viable in the future thanks to technology that might as well be magic. And, of course, you get ‘psykers’, genetic aberrations with weird mind-powers, which for all intents and purposes are magic.

The one faction whose attitude to the rest of existence isn’t ‘immediately shoot on sight’ are the anime-inspired Tau, and even they, the arguable ‘good guys’ of the franchise, aren’t remotely shy about using concentration camps and forced sterilisation. (The ‘Brighthammer’ parody of the franchise skewered this kind of everyone’s-awful storytelling by transforming the Tau into the villains, even though nothing about them had changed.)

It’s not merely that in this far future there is only war – it’s that it’s a cartoon war, red vs. blue, with no room for either compromise or nuance. This is a perfectly functional mechanic when you’re actually fighting the battles, but in narrative terms it’s ridiculous. Many tabletop games have a related distinction between ‘fluff’ and ‘crunch’ – fluff being all the florid backstory, and crunch being the numbers which, on the table, actually matter.

(The Space Marines end up being the worst victims of this distinction – on the table, their nigh-godlike powers are neutered to the point they are considered your baseline, average troop.)

Warhammer 40,000 came out of the same cultural milieu as Judge Dredd, which should tell you something. Both are products of the 1980s in Britain, both are ultraviolent sci-fi futures, and both lean so heavily on the grimdark that it goes full circle and becomes ridiculous. But Dredd was, first and foremost, a work of satire. It took heavy-handed policing to its logical conclusion where the humble beat copper literally becomes judge, jury, and executioner – in Dredd’s case, rotating through all three roles within the span of a few seconds.

Although Warhammer 40,000 has never had the same laserlike focus on a single subject, it’s all too evidently riffing on one thing and another. The space orks, our prime exemplar for the franchise’s sheer silliness, are simply fantasy orks in space! – and likewise, the aloof, long-lived Eldar are nakedly fantasy elves in space!, from which it should come as no surprise that the Warhammer brand also includes a straight Tolkienesque fantasy game.

(Your hardcore fans will here also mention the Squats, who were fantasy dwarves in space! and who have historically been the black sheep of the franchise, with Games Workshop spending a number of years denying they had ever existed.)

Some of the factions are, straightforwardly, nods to other media. The Tau are heavy on their Gundam-style mecha, the robotically skeletal Necrons are shamelessly The Terminator in much the same way as the Gigeresque Tyranids are basically Alien. And, to return to it being a product of the ‘80s, space ork warlord Ghazghkull Mag Uruk Thraka is – if you garble his name just a little bit – a clear nod to then-Prime Minister Margaret Thatcher.

Even the main chunk of backstory, the Horus Heresy, is a riff on Lucifer’s fall from grace in Paradise Lost as the Emperor’s favoured son, Horus, becomes too powerful and too proud and ultimately challenges his old man, peeling off the more villainous-seeming chapters of the space marines with him. The Emperor ultimately wins, but in pyrrhic fashion, and goes straight from Paradise Lost into being a Christ figure. He ends up hovering between life and death on ‘the golden throne’, a life-support system that requires millions of human sacrifices every day – and there’s that ridiculous, over-the-top scale again.

(Since stories beget other stories, at times this is just the snake eating its own tail. The heavy metal music Warhammer 40,000 owes so much to was itself taking a lot from Tolkien’s fantasy novels, and death-metal reliables Bolt Thrower ended up releasing a Warhammer 40,000-inspired album in 1989.)

But what elevates Warhammer 40,000 from merely imitating the wider culture is, again, this prevailingly silly ethos. Whether they’ve got lasers bolted onto them, or little pictures of skulls on their chest, or they’re, yes, spitting acid at their enemies, there will be at least one little detail that straddles the line between ridiculous and metal. And often three or four.

READ MORE: The Best Warhammer Strategy Games You Should Check Out