What do you call a musical about a bunch of cowboys who are in love, and also have terminal cancer? Croaklahoma! 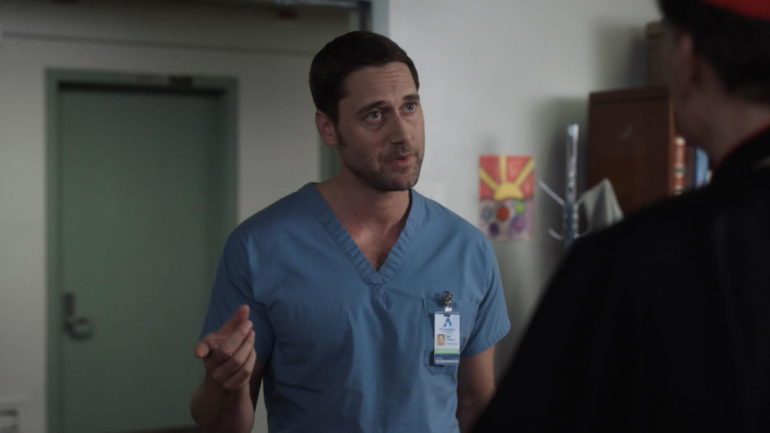 This week’s episode of New Amsterdam, “Croaklahoma” sheds light on a very important topic embedded within the healthcare system, one that is often ignored and one that does not get the attention it deserves. The parents of a patient come in after their son receives a heart transplant that his body seems to be rejecting. The rejection is a result of the parents trying to spread out his medication to make them last longer because they cost over $9,000 a month. “Croaklahoma” focuses on the idea that the healthcare system is flawed, and it presents way too many obstacles that often result in death and/or delayed treatment. Their insurance covered the child’s surgery – however, it will not pay for the anti-rejection pills, leaving the parents with zero options.

It’s a sad reality we don’t often see uncovered in medical dramas, besides The Resident which prides itself on telling the hidden stories of hospital administration/healthcare system. This topic is extremely important and one that resonates with millions all over the world. In the episode, the couple is faced with a decision to make, and it’s a difficult one for many reasons. Max suggests that the couple get a divorce so the mother can apply for Medicare as a single mom with no income and acquire free treatment for her son. It seems like such a heartbreaking, final option to make but it’s a jarring reminder that while New Amsterdam is a television series, the story it is telling with this couple is not. The psychological impact such a decision would take on a family is hard to imagine and New Amsterdam does a solid job of illustrating it. Every aspect of such a situation was explored from the reaction of the parents to the child running away out of anger, and to the parents finally sacrificing their religious and personal beliefs for the sake of their child’s health.

“Croaklahoma” is an episode that will certainly speak volumes to its viewers because it’s a problem that so many of us have to face as our reality. It’s difficult to navigate through a flawed system and many will appreciate that New Amsterdam had the courage to shed light on it. As has been said time and time again, this medical drama is not afraid to go above and beyond the norm and wow its viewers with the gripping and emotional stories it likes to tell.

As Max continues his treatment, things are starting to get very real with his storyline. There’s a specific focus in “Croaklahoma” regarding Max’s prognosis and whether or not he’ll be around for their baby. It’s often so easy to ignore the elephant in the room, in Max’s case, his cancer, and focus on things that will distract you. For Max’s wife, it was concentrating on taking Lamaze classes and getting foot massages during classes. This takes Max by surprise and makes him realize that their focus is on the wrong thing considering he may pass away at any time if things take a sour turn. It’s a point that is very much appreciated because again, many don’t think about the horrible, scary things. Max’s character has never been afraid to face the gloom and doom and while bringing up the bad definitely puts a damper on things, it is important to bear it in mind. One medical drama that comes to mind is The Good Doctor that can be comparable to the types of stories it tells, especially like the plot of “Croaklahoma”. The protagonist of The Good Doctor has autism and the topics that often come up there are very emotional and have the tendency to impact its viewers. Similar to the types of brave choices New Amsterdam makes, there is no hesitation to talk about sensitive topics on The Good Doctor, including ones addressing the reality of an autistic surgeon being successful in the long run.

But with all the frightening things Max has to think about, there is something New Amsterdam does wonderfully in this episode. During chemo treatments, Max has finally opened up to and made a circle of friends. Initially, he doesn’t open up to them, or join in when they make cancer puns with movie titles. But as “Croaklahoma” progresses, Max learns that while focusing on the major things is important, you have to let loose and enjoy the life you have left. This is a very profound thought, especially for a character going through a cancer diagnosis and treatment. Seeing Max at the end of the episode interacting with his group of friends and just take it easy brings a level of peace and ease to the viewer’s mind. It’s almost as if you as the viewer understands his complicated journey and are a part of his self-discovery on a scary, uncertain path.

Another character story in “Croaklahoma” that really stands out is Helen’s patient, who is an elderly male that runs away with his girlfriend and leaves his guardian behind. The story has an emphasis on how the patient no longer wants to have a guardian and wants to be able to spend whatever life he has with the woman he has fallen in love with. From the surface, this story may seem basic and repetitive but there is definitely a deeper message to walk away with here. As a society, we have a tendency to view the elderly as incompetent and unable to make decisions of their own, and while that is true for some, it’s not true for all. At the end of the day, there is a level of love and affection we all need to get through our daily lives, and the elderly are no different. New Amsterdam spent a lot of time addressing this in “Croaklahoma” through this patient’s story who eventually terminates his guardianship with his caretaker and hands it over to his new wife. It’s heartwarming, emotional, and an insight into a world that we don’t often get exposed to.

New Amsterdam continues to push the barriers of brave storytelling by giving us unique, impactful, and intriguing stories. This week’s episode, “Croaklahoma”, doesn’t shy away from addressing fear, uncertainty, love, and exposing a system that works against the people that desperately need its help. Kudos to this series for taking a step in the right direction and for talking about the topics that get swept under the rug or are brought up in a way that don’t impact us like they do in New Amsterdam.