MEMORABLE MOMENTS: Boromir’s Sacrifice In The Fellowship of the Ring 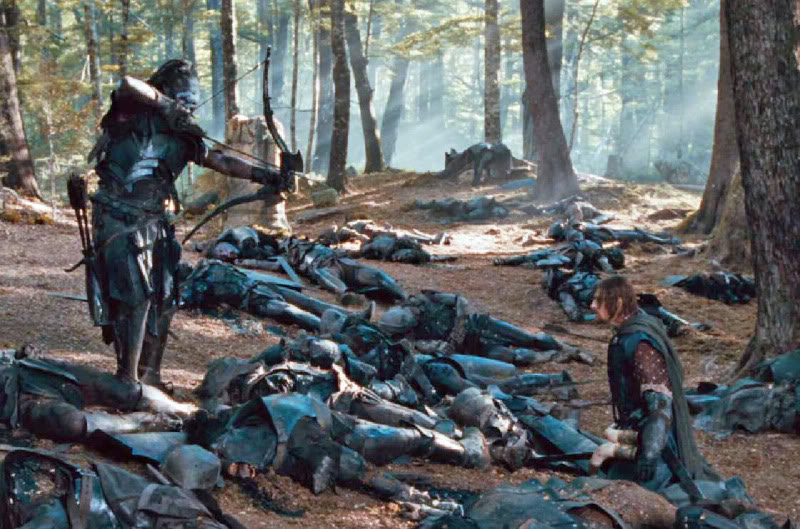 Peter Jackson’s Lord of the Rings films came to life at a seminal time in the lives of us millennials. I know for me, they are some of the first films I remember seeing, right down to which screen was showing them in the local cinema.

As fantasy films, they are historic; the first time, really, that fantasy was taken seriously as a genre. Approval rippled down from the Academy and culminated in Return of the King winning the Best Picture Academy Award. As pieces of movie history, they are full of quotable lines and memorable scenes, and it was difficult to narrow each film down to just one.

At the end of The Fellowship of the Ring, Sean Bean pulls his signature move as his character, Boromir, dies heroically. He is trying to protect the hobbits, Merry and Pippin, from the Urak-Hai who have come to take the Ring from the Fellowship. This comes just after Boromir himself, under the influence of the Ring’s power, has tried to take it from Frodo. Boromir fights the Urak-Hai, led by the slightly terrifying Lurtz, and although Aragorn comes racing to his aid, it is too late.

Boromir’s death comes as a shock to the audience. Firstly, we have already lost Gandalf earlier in the film, and we aren’t conditioned to expect the death of another hero so soon. Secondly, the way he dies is pretty horrific – can any of us unsee Boromir on his knees, already pierced with arrows, as Lurtz draws back his bow to fire a last arrow into Boromir’s head? Aragorn’s arrival saves us that grisly last sight, but it is a shot that, once seen, is very hard to forget.

Boromir is a character who has been difficult to get a handle on throughout the first film. He goes toe-to-toe with Aragorn, and doesn’t seem to care what kinds of offence he might cause. He is a good person, we think, because of how he acts with the hobbits and fights in the caves to protect his fellows, but he is also weak; the Ring can corrupt him, or tries to anyway. He spends crucial time before his death threatening Frodo and trying to take the Ring, before he seems to come to his senses and feel genuine remorse for what he has done. In his last moments, he redeems himself by trying to protect Merry and Pippin, and we can forgive him for being corruptible, because at least he tries.

Peter Jackson and his fellow script writers – Philippa Boyens and Fran Walsh – knew what they were doing, killing off Boromir when they did. In the books, we don’t get his death until the start of The Two Towers. By making this the climax of Fellowship instead, they made sure that we understood not only the fact that no one in these films was going to be safe, but also the significance of the moment. And that significance is for Aragorn, not for Boromir.

By the end of The Fellowship of the Ring, we are left with an apparent hero (Aragorn) who cannot save the day. Frodo, the true hero, has left the group with only Sam at his side, going out on his own to get rid of the Ring because he knows now that he cannot trust anyone to help him (except Sam because, obviously, it’s Sam). Aragorn understands this too, although it frustrates him and the audience’s expectations. He tells Frodo that he would have gone with him, all the way to Mount Doom, as he promised to do, and perhaps in another story, he would have been allowed to go to. But as Frodo walks away, the audience gets it. Aragorn will have to help him another way. As we come to that understanding, the sound of Boromir’s horn rings through the forest and Aragorn turns towards it. The symbolism is clear. Another way is calling him.

Aragorn defends Boromir from further attack, but it is already too late. Boromir is dying, and nothing Aragorn can do will help him. Boromir, who has been reluctant to acknowledge Aragorn as the lost king of Gondor, finally pledges himself to Aragorn with the seriously poetic line, ‘My brother, my captain, my king.’ In the book, Boromir doesn’t do that in his last moments. He still refuses to accept Aragorn as the king and spouts out something that I am almost certain isn’t as great as what he says in the movie (I love you, JRR Tolkien, but PJ smashes it out of the park in this instant).

This acknowledgement from Boromir sets up Aragorn’s story, for the next two films, and also helps to make it clear to the audience that Aragorn could be the hero we all deserve and should be seen as such. Boromir is the only one who has questioned him, doubted his kingship and his pedigree, and to see him come to terms with it is the last piece in the puzzle. Aragorn will be king again, we are sure of it, and in the meantime, he will do what Boromir could not. He is going to be the one to save Merry and Pippin, and he’s taking Legolas and Gimli along for the ride.

It is a neat narrative device, and a well-worn one – the passing of the mantle from one character to another – but this is a fantasy film and we have to use some tropes, or else what is even the point? Aragorn is the one who has been doubting himself the most, and although Boromir’s declaration doesn’t instantly cure him of that, it gives him the push he needs to start acting more like a king and less like a grubby ranger. (He does still look like a grubby ranger for most of the next two films, but at least he’s thinking more like a king).

It is also worth pointing out that Boromir, who is for all intents and purposes, the heir of Gondor, decides that the hobbits are worth laying down his life for. His death is a key moment for them too, as we realise that he has sacrificed himself for them. We all know how the hobbits are respected by the end of the trilogy – “My friends, you bow to no one” (all my tears) – but this early move by Boromir is just enough to make us as an audience think about them in a new light. They are unassuming, but they are also worth the life of someone like Boromir.

And, as the entire trilogy is arguably about the worth of unassuming things – hobbits, rangers, gold rings – Boromir’s death and sacrifice in this first film helps to establish that theme very early on.