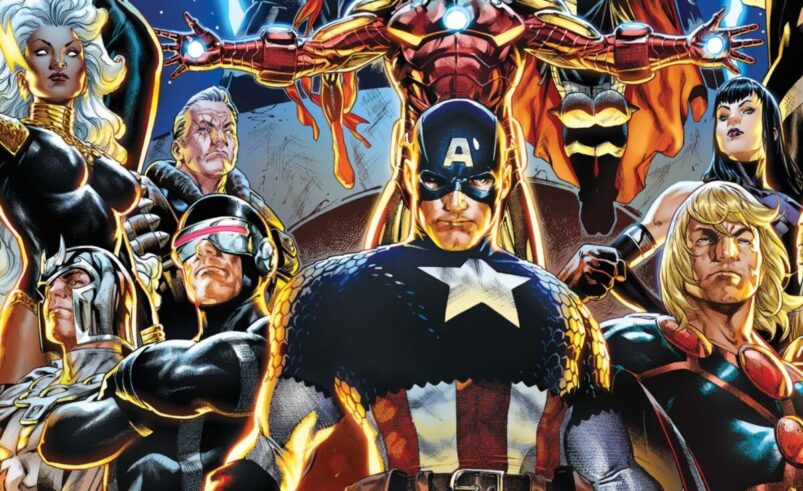 As I sat down to read Marvel’s latest crossover event, A.X.E.: Judgment Day, I found myself reflecting on the history of the comic book crossover itself. Over the last four decades or so, Marvel and its chief rival DC have cranked out dozens of these line-wide limited series, both banking on the lasting appeal of superhero team-ups and status quo-shifting stakes. Where the two publishers diverge, however, is in how they approach said events – while DC seems content to churn out endless sequels to Crisis on Infinite Earths, Marvel is less defined by a single crossover.

Sure, the House of Ideas has revisited its own back catalogue of events over the years (most notably, its wars Secret and Civil) but, generally, Marvel is more willing to take a punt with standalone stories for its line-wide epics than its Distinguished Competition. That’s not to say that Marvel is any less guilty of cranking out the kind of “same old, same old” crossovers long-time comics fans like me love to complain about. On the contrary, the publisher has a very dubious track record when it comes to recycling the increasingly tired “heroes versus heroes” premise for its annual events.

At first glance, this is exactly what A.X.E.: Judgment Day is: another shared-universe shattering blockbuster that essentially boils down to two factions of costumed do-gooders duking it out. Yet only two issues in, A.X.E.: Judgment Day has already proven itself as anything but a rehash of past events. In fact, in many ways, it’s the crossover people sick of crossovers have been waiting for.

A lot of this is down to the genesis of the story itself. Writer Kieron Gillen has previously spoken about trying to avoid the common pitfall of building an event just for the sake of it, and that’s readily apparent in A.X.E.: Judgment Day #1 and #2. Rather than relying on an artificial set-up based around artificial stakes, here the plot grows organically out of existing threads from the monthly Eternals, Avengers, and Immortal X-Men titles taken to the next logical stage of their narrative development.

The result is that A.X.E.: Judgment Day’s core premise is both blindingly obvious and brilliantly clever: the Deviant-hating Eternals finally go to war with Marvel’s mutant population. Because of course they do – how could they not, now the already genetically-divergent mutants have upped the ante by learning how to cheat death itself? At the same time, it’s the kind of storytelling engine that dovetails with Marvel canon both new and old so neatly that it makes you wonder why no one else has thought of it until now.

But at the end of the day, it’s still a variation (albeit an inspired one) on the traditional Marvel crossover formula, the Eternals and the X-Men squaring off, with the Avengers caught in the middle. Fortunately, this isn’t really the story Gillen is interested in telling with A.X.E.: Judgment Day, or at least, not the whole of it.

By the time readers turn the final page of Issue #2, the scribe has completely shifted the trajectory of the story and, suddenly, we’re headed in a decidedly more existential direction than most mainstream superhero comics are willing to go. Yet this unfolds in a way that still feels true to both the previous two chapters, and just as importantly, to the Eternals lore first laid down by Jack Kirby back in 1976.

At the same time, A.X.E.: Judgment Day’s reliance on canon doesn’t make it as impenetrable as it probably should be. Despite its sprawling cast of characters, detail-rich world, and big ideas, this is still a remarkably accessible crossover. True, a complete newbie to the Marvel Universe might struggle to keep up, but so long as you’re vaguely up to date with either Eternals (I am), Immortal X-Men, and Avengers (I am not), you’ll easily keep track of what’s going on.

This is by design, not accident. Gillen is on the record about how important it was to him that he hit the right balance between brisk pacing and handy exposition for new readers. In this respect, the Avengers are his secret weapon, standing in as audience surrogates as needed, their ignorance about the Eternal and mutant society providing the perfect excuse to answer whatever questions we may have. It’s a convenient storytelling device, which – when coupled with Gillen’s knack for slipping in lines of seemingly innocuous lines of dialogue with huge ramifications for A.X.E.’s tie-in titles – keeps the information flowing without bogging down the narrative.

The upshot of this is that there’s still enough breathing room left over for Gillen and artist Valerio Schiti to inject some genuine human drama into proceedings. Yes, Gillen supplies Schiti and colorist Marte Gracia with plenty of superhero spectacle to show off their tremendous artistic chops – and visuals like skyscraper-high Eternals rising from the sea are nothing short of breath-taking. But what makes these moments and others like them really land, what makes them matter, is that they’re rooted in character.

I don’t mean that in the sense that most crossovers pay lip service to how the likes of Wolverine or Captain America feel on the eve of battle, either. In A.X.E.: Judgment Day, Gillen regularly takes a beat to make sure we understand the different reasons why these superpowered people are acting and reacting the way they are, which makes their behaviour (and its consequences) feel natural and believable. At their best, these character beats can lend poignance to even the most bombastic of scenes, as exemplified by the disarmingly vulnerable final thoughts of a hulking, fire-infused minotaur.

And that’s just the superhuman side of things. Unlike most crossovers, from Issue #2 onward A.X.E.: Judgment Day starts to recontextualise its OTT narrative from the perspective of your average punter. Again, these aren’t the banal “everyday heroes” vignettes that sometimes crop up in event comics. Together, Gillen and Schiti give us well-sketched out individuals who reflect the unthinking prejudice, hand-wringing moral uncertainty, and casual indifference that most of us can recognise in ourselves or others.

The upshot of this is that it allows Gillen to Trojan Horse a very timely, very raw theme into what is, ostensibly, a popcorn comic, which is (as he himself so succinctly puts it) “Are we all just f—-d?” It’s a question that the remaining four issues of A.X.E.: Judgment Day stand poised to answer, and based on recent form, not necessarily in the way readers expect. After all, as of Issue #2, the entire cast of characters is on the brink of final, divine judgment. That’s a tense position to find yourself in – yet if they were to be judged based solely on A.X.E. Judgment Day’s quality as a modern-day crossover event, chances are they’d be resting easy right now.

READ NEXT:  Eight Billion Genies Is A Wish Come True For Fans Of High Concept Comics