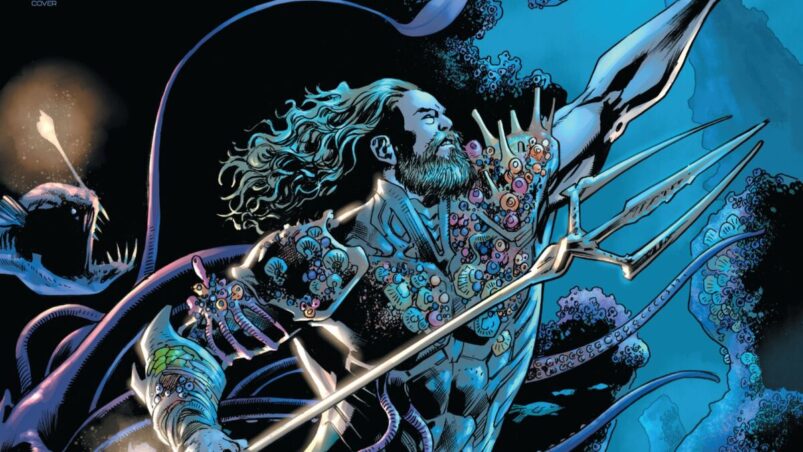 DC Comics is responsible for two of the biggest titles on sale right now: Dark Crisis and Aquaman: Andromeda. The former is written by Joshua Williamson and illustrated by Daniel Sampere and serves as the most recent direct sequel to 1985 crossover event Crisis on Infinite Earths. The latter is the latest continuity-free effort published under the DC Black Label imprint and features a story by Ram V and art by Christian Ward.

In many ways, these two mini-series have plenty in common. Both are superhero yarns that, in both a literal and figurative sense, rely on darkness as a central motif. That’s where the similarities end, however, as Dark Crisis ultimately represents the DC Universe’s limitations, whereas Aquaman: Andromeda highlights its endless possibilities.

This isn’t meant as a dig at Williamson and Sampere. Taken on its own terms, Dark Crisis on Infinite Earths (to use its recently revealed “real” title) is an enjoyable enough crossover in the same vein as its predecessors. Yet there’s no escaping how tired it all feels, with every key plot point and character beat grounded in DC canon, including some elements that are close to 40 years old.

Of course, many fans consider long-established continuity the best part of a shared universe like DC’s, something that adds a greater sense of history and emotional heft to proceedings, and sometimes it does. But here, the continuity-heavy approach to storytelling simply underlines how unoriginal everything about Dark Crisis truly is – a pen-and-ink warning sign that the plot potential of the publisher’s admittedly deep IP well is finally starting to run dry.

To his credit, Williamson bakes the cyclical nature of the DC crossover machine – in particular, the meaninglessness of death in a world in which it’s rarely truly the end – into Dark Crisis’ narrative. Even so, addressing the inherent limitations of a story isn’t quite the same as breaking free of them, and after reading the first two issues of this mini-series, it’s hard to escape the feeling there’s nothing new left for the DC Universe to say about itself and its characters through a “Crisis” crossover.

But then, how could there be? Aside from Crisis on Infinite Earths, this fictional reality has already endured not only Infinite Crisis but also the somewhat optimistically named Final Crisis, not to mention umpteen other cataclysmic events. So, no matter what seemingly novel angle a creative team brings to this type of story today, it’s almost certainly been done at least once already.

Which isn’t to say that the DC Universe isn’t still fertile ground for telling great stories. On the contrary, a comic book series like Aquaman: Andromeda is ample proof that writers and artists can still put a fresh spin on DC’s iconic heroes and villains, as long as they aren’t required to stick to established DC canon.

It’s not even like the Aquaman envisioned by V and Ward is all that different from his mainstream counterpart, either. Their King of Atlantis is still a superpowered hero torn between the surface and undersea worlds and willing to intervene when human lives are at stake. He also has at least one familiar antagonist, the supervillain Black Manta, on hand to cause him headaches. No, what’s changed is the type of tale this Aquaman is designed to take part in: a psychological horror story, unlike anything the in-continuity version of the character and his Justice League pals have ever had to face.

Yes, DC has pitted its top-tier superheroes like Aquaman against threats inspired by the likes of the Alien and Predator films, even publishing licensed crossovers that tied in with both those franchises. The publisher has also played up the darker potential of its core mythology, most recently in the Dark Nights: Metal event and its sequel, Death Metal.

So, it’s not like DC’s mainstream output hasn’t ever incorporated other genres, including horror. But outside of a few rare exceptions like Grant Morrison and Dave McKean’s Arkham Asylum: A Serious House on Serious Earth, any time a DC A-Lister veers into even vaguely edgy territory, superhero tropes inevitably swoop in to shield us from the full impact. That’s not the case with Aquaman: Andromeda, though, because Ram V’s script very consciously rips away this comforting veneer and drops both the protagonist and audience into a world they’re not fully prepared for.

Aquaman: Andromeda doesn’t just read differently from a book like Dark Crisis, it looks different, too. Freed of any expectation to conform to a traditional superhero comic book aesthetic, Ward cuts loose with his mixed-media style – pencils, pens, watercolors, and digital techniques all colliding together – to give the Black Label mini-series a refreshingly distinct identity. There’s an atmospheric, haunting quality to Ward’s work in Aquaman: Andromeda that feels more authentic than anything depicted in even the most ominous of Dark Crisis’ panels, yet there’s an undeniable beauty to it, as well. This is still the DC Universe, only here that translates to something that’s exciting, scary, and, above all, original.

So, does this mean that DC should stop publishing regular crossover events like Dark Crisis? No – or at least, not entirely. After all, there’s still an audience for that type of story, from comic book newbies not yet jaded by seeing different versions of the same basic plot trotted out over and over again, to long-time devotees who find comfort in just this sort of narrative repetition. But it does mean that DC should consider building its future more around stories like Aquaman: Andromeda than on conventional, continuity-driven fare like Dark Crisis.

It’s a risk to be sure, especially given the large bump in sales that comes with putting a new crossover on the racks. Yet there are also the long-term gains to consider, such as how enticing a catalog of hyper-accessible, wildly inventive “done-in-one” collected editions would look to non-readers and lapsed fans alike. A DC Comics that’s focused on telling new stories about the world’s greatest superheroes instead of recycling old ones – just think of the possibilities.

READ NEXT: 5 Best Marvel MAX Comics Of All Time