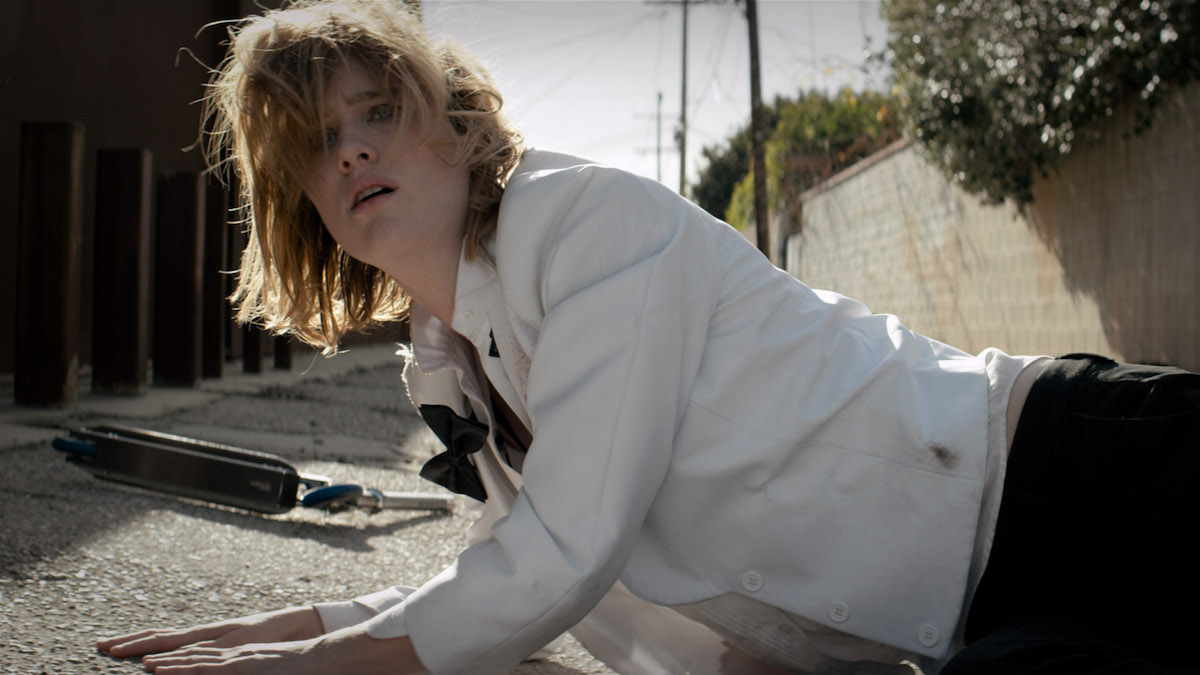 Ever discovered a band that nobody else knows about? One of those really obscure bands that your cool friend is a fan of then lends you their album and you kinda dig them? That’s what watching Izzy Gets The Fuck Across Town feels like. Like you’ve just discovered a really cool band. Not your favourite band, but a cool one all the same.

Plot-wise Izzy Gets… is as simple as its title suggests. Izzy (Mackenzie Davis), upon waking up one morning next to a one night stand, feeling knackered, hungover and in dire need of a cigarette, finds out that her ex is having an engagement party that night on the other side of LA. Izzy still loves her ex. So one quick trip to the toilet and she’s away to stop her ex from making a huge mistake and win him back. Along the way she’ll meet a host of oddities and friends in her quest to get her love back, embracing her inner Neal Page to get the proverbial fuck across town. Can Izzy do it?

There’s plenty to love about Izzy Gets…and first and foremost is the simplicity of its plot. It’s a woman’s journey to get from one side of LA to the other for less than wholesome reasons, but that doesn’t matter because it’s a character study of a fuck-up who’s clearly trying to not be a fuck-up anymore. Over the course of 80-odd minutes we get to see Izzy unfold and develop from a hot mess to something completely different. It’s testament to Mackenzie Davis that she imbues Izzy with humour, heart, and a certain abrasive charm so that even though her goal might seem selfish, you can’t help but root for her.

It’s also got the power of indie-cred cool about it because lord this is an aesthetically pleasing film. It’s all warm tones, gorgeous filters, and split screen shots. Never has a hangover looked so appealing. Structurally, the film’s scenes are split into ten, album track-like segments, really giving the film the feel of an album come to life (imagine mid-90s Hole as a film minus the drugs).

Unlike most classic albums however Izzy Gets…definitely has some skippable tracks. What starts out as a blisteringly fast and furious riot starts to stumble the closer Izzy gets to her ex and unravels completely in the aftermath of what happens when she does. With that in mind, the actual scene with her ex packs a wallop and Davis shines with a performance that will have your sympathy and your heart.

But like any pilgrimage, it’s not the destination: it’s the journey that counts, and the journey is a laugh riot. The characters Izzy meets along the way –some weird, some funny, and some certainly needed for our Izzy– all add to the film in their own little way, even if each one is only brief. Alia Shawkat gets an excellent scene breaking into a house with Izzy when it all goes wonderfully awry. Carrie Coon also shows up to deliver some home truths to our hungover heroine. All stern-faced and bullshit-free, Coon runs away with her cameo, and gets to show off her singing chops too. It’s a shame there wasn’t more of her (but then again, one can never have too much Carrie Coon).

Izzy Gets The Fuck Across Town is released in select U.S. theatres on June 22nd.

Verdict
Izzy Gets The Fuck Across Town is an almost great film. After starting out well it loses steam in its final third and threatens to become forgettable. Nevertheless, with its indie-cred cool and Mackenzie Davis' stellar performance, this is one journey that you should experience, even if it is just the once.
7
Cultured Vultures is a pop culture website established in 2013 covering all things gaming, movies, and more. We eat your words.
All The News On The Biggest Games