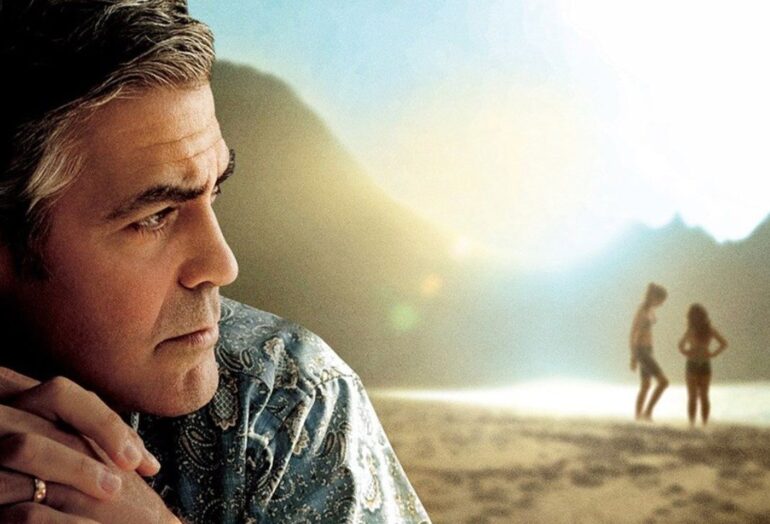 In celebration of George Clooney’s 60th birthday on May 6th this year, it feels an appropriate time to look back and appreciate the best of his legendary talent. With a career of over forty years, Clooney has transcended his expected handsome leading man roles into respectful acclaim as an actor, film director, producer and screenwriter. Here are the five movies that helped cement his position as a mainstay in Hollywood.

Two years after his breakout role as Doctor Doug Ross in the colossal television smash hit ER, Clooney gained his first leading performance as criminal Seth Gecko in the Robert Rodriguez-helmed action horror. It’s unquestionable that the partnership between Hollywood wonderkids Rodriguez and Quentin Tarantino was a huge reason for the initial interest, after their recent releases of Desperado and Pulp Fiction, respectively. However, it’s Clooney who carries the majority of the film on his shoulders throughout as the main character on the run to Mexico who unwittingly stumbles into a vampire’s nest.

An affable anti-hero who avoids killing when possible, Clooney’s naturally dry wit makes him a natural for Tarantino’s dialogue and his horror at his brother Richie’s violent rape and murders helps endear him to the crowd. The underlying tension of the first half and the chaotic madness of the second half follows the growing heroism of Seth, culminating in an utter badass line when all hope seems lost: “No, you use it (last bullet) on the next fuck who tries to bite you!” With the film earning three times its budget back at the box office, Clooney’s future seemed strong.

Unfortunately, Clooney’s next big leading performance was the widely panned Batman and Robin, leaving him seemingly desperate for a major win. Against expectations, he appeared in the Steven Soderbergh-directed independent movie Out of Sight, again portraying a bank robber but more gentlemanly in character. During his escape from prison, Clooney’s Jack Foley is forced to share a car trunk with Jennifer Lopez’s U.S. Marshal Karen Sisco, quickly gaining a connection between the two.

The sexual chemistry between Clooney and Lopez sparkles off the screen, charging the tension of their cat-and-mouse game. Clooney’s effortless charm displayed in From Dusk Till Dawn is utilised excellently here and combined with the sultriness of Lopez, enhances the romance between the two. This also becomes a vital movie in Clooney’s career, not only showing his preference for more independent movies, but also demonstrating his substance.

The expectation was for his handsome looks to be easily coasted on, but instead he demonstrates a complexity under the surface, a desire to prove himself a thespian as well as a star.

By 2005, Clooney had moved on from his leading man roles and focused on subject matters that inspired him, even transitioning into directing with 2002’s Confessions of a Dangerous Mind and 2005’s Good Night, and Good Luck. After performances in a range of movies such as 1999’s Three Kings, 2000’s The Perfect Storm, 2002’s Solaris and the Ocean’s Trilogy, Clooney was cast in a geopolitical thriller called Syriana, written and directed by Stephen Gaghan of Traffic fame.

Gaining both weight and a dishevelled beard in preparation, Clooney portrayed CIA agent Bob Banes in a movie that juggled multiple storylines focusing on the oil industry, including its social, economic and political repercussions. While primarily an ensemble piece with a cast including Matt Damon, Christopher Plummer, Jeffrey Wright and Chris Cooper, it’s on Clooney’s shoulders that this complicated and demanding movie resides. By the end of Syriana, Clooney demonstrated a hauntingly devastating performance that went on to earn him an Oscar and Golden Globe for Best Supporting Actor.

Following the success Tony Gilroy earned with his screenplays for the Jason Bourne Trilogy, he was offered his first chance directing a movie. After being turned down by Denzel Washington for the leading role, Gilroy approached Clooney for the role of a fixer working for a prestigious New York City law firm. Michael Clayton is a tense and engrossing film that follows Clayton as he struggles with the breakdown of good friend and senior litigation partner Arthur, as played by Tom Wilkinson.

In a cast that also features Tilda Swinton and Sydney Pollack, Clooney has some of the best scenes, balancing a compassion for his friend with a confrontational and impeccable ability to get the job done. In the end, the movie was rewarded with nominations for Clooney, Wilkinson and Swinton for their elite performances. As for Washington, well, he would later name two roles he regrets turning down, David Fincher’s Seven, and this film.

Alexander Payne came to prominence in 1999 with his directing of Election, following up with 2002’s About Schmidt and 2004’s Sideways, with tremendous lead performances from the likes of Matthew Broderick, Jack Nicholson and Paul Giamatti, earning awards in the process. After this five year critical and commercially successful run, Payne took a seven year sabbatical before returning with The Descendants, a beautifully moving and evocative look at the messy and unpredictable nature of life and loss. Following in the steps of heavyweight performers such as Nicholson and Giamatti, Payne chose Clooney as his leading man in possibly his career best performance.

Clooney’s Matt King is an attorney in Hawaii dealing with issues, such as his extended family trying to convince King as trustee to sell their family trust, and a boating accident that leaves his wife in a coma. Clooney portrays a character struggling with the expectations placed on him, as well as the reveal that his wife was cheating on him and his estranged eldest daughter knew. With the realisation that his workaholic nature drove his wife away, and that he has two daughters who now need him more than ever, Clooney depicts an internal struggle and stress throughout that humanises him like never before.

When I first saw this film, his performance made me cry, and I’d be amazed if I were the only one, as he went on to win multiple awards.

READ NEXT: The Best Feel Good Movies on Netflix