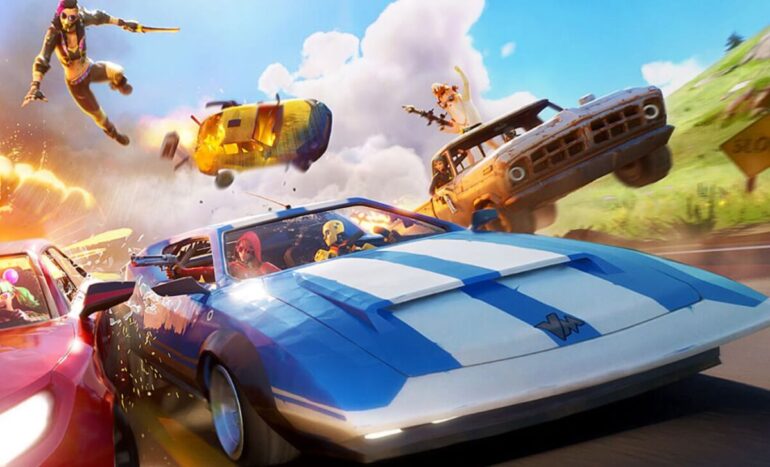 In the midst of a now very public and legal spat between three big corporations, Fortnite has been pulled from both Apple and Google Play stores. Yesterday, Epic introduced a way to purchase V-Bucks directly from Epic, removing Apple and Google’s 30% cut on any transactions made.

Within a few hours, Apple removed the game from their stores, which Epic seem to have saw coming from a mile away. Almost immediately, they filed a lawsuit against Apple, along with publishing a video titled Nineteen-Eighty-Fortnite that references an Apple advert regarding the launch of the MacIntosh, only this time Apple are now the soulless corporation being lampooned. Do you get it? If there’s ever a good time for the “I know writers who use subtext, and they’re all cowards” image from Garth Marenghi’s Darkplace, it’s now.

Not long after the video went live, and Epic tried to rally support with the #FreeFortnite hashtag, Google removed Fortnite from its store as well, prompting Epic to file legal papers against the company too. Still, Android users can still try to play Fortnite through the Epic Games app and the Samsung Galaxy Store, and the .APK file is available to download.

As for iOS users, no new players are able to download the game, because if it’s not in the Apple App Store and you don’t have a jailbroken device, there’s no actual way to download it. If you’ve already downloaded Fortnite, you can still play it on your Apple devices, but the game will no longer receive any new updates, so that means no Chapter 4 when that launches.

The lawsuit itself, which you can read through right here, sees Epic trying to take Apple to task over its App Store policies, which Epic believe constitute a monopoly: “Apple’s removal of Fortnite is yet another example of Apple flexing its enormous power in order to impose unreasonable restraints and unlawfully maintain its 100% monopoly over the iOS In-App Payment Processing Market.”

Apple are already facing legal action over its approach to their own App Store, so perhaps Epic saw blood in the water and figured now would be the best chance to make their move. The speed in which Epic had a lawsuit prepared and the parody video is pretty clear confirmation that they anticipated Apple removing Fortnite from their storefront.

Discounting V-Bucks, only for Apple and Google to remove Fortnite, seems like a pretty reliable method to make Epic look like the good guys against these big bad corporations, but it’s also important to remember that Nintendo, Sony and Microsoft also require a similar 30% cut of transactions made on their storefronts. If Apple and Google lose their case, Epic could use legal precedent to circumvent console storefronts too. Ultimately, this is all just rich corporations trying to get richer, so don’t let it distract you from the fact that nipples don’t exist in Fortnite.