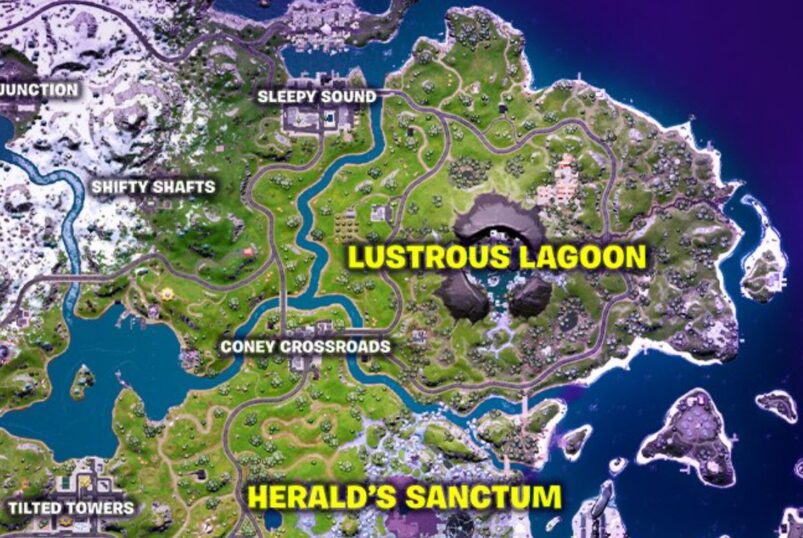 Fortnite‘s map never stays the same for very long (unless it’s the first season of Chapter 2, of course), with a new season always being a good opportunity for a refresh. It’s not the craziest change we’ve ever seen, but the Fortnite: Chapter 3 – Season 4 map offers plenty of shiny new things — quite literally.

Here are a few of the new and updated POIs and Landmarks that you can find on the Fortnite map.

It seems that most of the changes can be found in the east of the Island, which makes sense narratively as that’s where The Herald‘s chrome first started spreading after consuming most of the members of The Seven.

In case you were worried, Epic has left Tilted Towers alone so far this season.

Howevever, it does appear that there’s chrome encircling the corners of the map, meaning that we should expect a lot of things to change over the course of Season 4.

Herald’s Sanctum is the biggest new location of the season, a POI near Sanctuary where you can find The Herald, Season 4’s secret Battle Pass skin.

Don’t forget to travel to these new locations on the Island to earn some free XP for your Season 4 Battle Pass.

If you were hoping for more changes than this on the Fortnite map, don’t forget that Epic constantly keep the map updated over the course of the season to refresh things and keep the community invested. How the Fortnite map looks on day one of Season 4 is almost definitely not how it will look by the final day, especially with Halloween.

Elsewhere in Season 4, don’t forget to grab yourself the new Victory Umbrella for the season, as well as to check out the Battle Pass, which includes a somewhat surprising debut for Brie Larson.