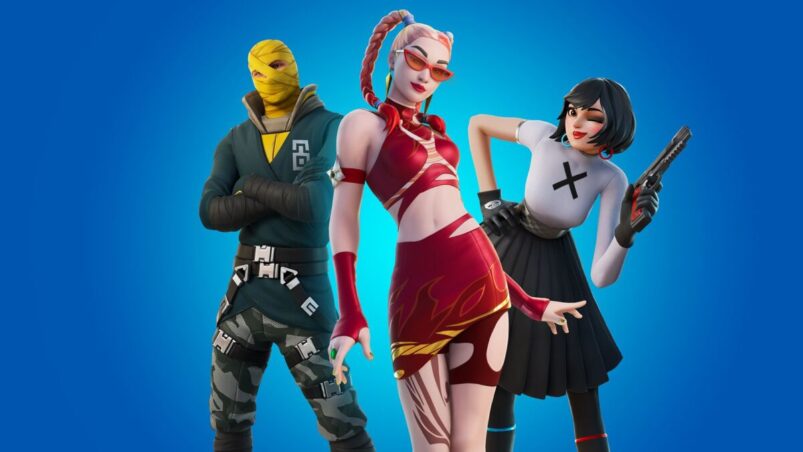 From an aerial bus, you drop, freefalling onto a massive island scattered with buildings and outposts. Around you, you hear the excited screams of others – your competition in this game of last man standing. The very opening moments of a Fortnite match are heavy, exhilarating, and tense, but then Darth Vader and Thanos go toe-to-toe on the ground in silly displays of licensing. There aren’t many games like Fortnite, at least in terms of sheer crossover power.

Though each season brings something ridiculous and new to Fortnite, it’s not unthinkable that you may need the occasional break from the zaniness without wanting to stray too far from the things you like most about Epic’s battle royale. And to help, we’ve compiled this list of games like Fortnite you should try.

They may not blend Marvel, Star Wars, Ridley Scott’s Alien, The Walking Dead, Resident Evil, and Twitch streamer Ninja into one game, but we’re also not entirely sure if that’s a bad thing.

Ever wonder where the idea for Fortnite’s Impostors mode came from? Players knew long before Epic ever confirmed, but it was Among Us that served as inspiration. Innersloth had a very simple concept – take John Carpenter’s The Thing (or the novella it’s based on, if you’re a purist), add cutesy spacemen, and throw them into the mix with up to three Impostors.

While the crewmates navigate different maps to perform a series of tasks, the Impostor looks for the right time to strike. If they can kill a crewmate without being discovered, it becomes a game of “Whodunnit” as everyone accuses each other of being “sus” and a vote is cast. If someone wasn’t convincing enough about their innocence, chances are they’ll be sent packing – even if they were innocent.

Fortnite did a decent job copying Among Us’ formula, but players should try Innersloth’s quirky take, especially with Impostors now vaulted.

It takes a talented developer to try to take the chaos of Fortnite and fit it within a virtual reality space. With how easy it is to get disoriented in VR, coupling that with the high tension of battle royale just sounds like a disaster. Until, of course, you play Population: One, which somehow marries the two concepts rather successfully while integrating a basic version of Fortnite’s build mechanic.

While not as big as Epic’s battle royale in any way, Population: One handles the game mode very well. Players launch from a platform and guide themselves down to the desired location on the map. From there, it’s a mad dash to secure weapons, shields, and any other useful tools before the firefights start.

Population: One keeps you on your toes as you never know who’s slinking up behind you. Some of the weapon mechanics are a little janky, as is expected with most VR games, but the overall concept works, giving players a way to play a game like Fortnite in VR. 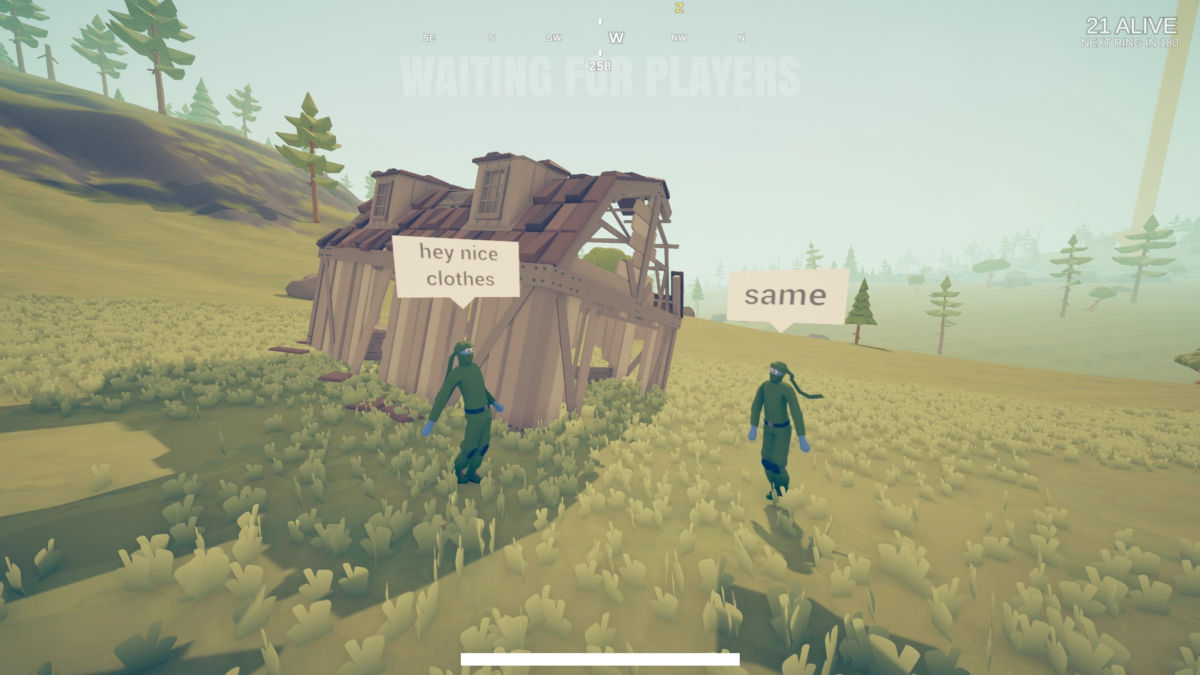 Considering we’ve seen people soar through the air attached to balloons, we’re not entirely confident in the truth in this game’s name. However, we’re willing to look the other way considering just how ridiculous things can get on this battlefield. Landfall took the battle royale concept and applied it to its Totally Accurate Battle Simulator. The result? A colorful, ridiculous-looking competitor that does a decent job of standing up against the battle royale OGs.

Despite how Totally Accurate Battlegrounds looks and feels, it plays out like games like Fortnite. Sixty players enter an arena and duke it out until one player is left. There’s an abundance of weapons, support items, and tools to find, along with Blessings, which augment aspects of each player.

If you scrutinize any battle royale that doesn’t take itself seriously, this may be one worth skipping. Otherwise, it’s a worthy entry and a fine example of a game like Fortnite you should be playing.

What happens when you throw 60 colorful characters into a bout of “last person standing?” Pure and utter chaos is what happens. Fall Guys is a battle royale game that separates itself from the physical violence of Fortnite with pure, wholesome platforming and fun mini-games. Which, in turn, spurs a whole different type of violence in the form of four-letter words and thrown controllers.

Players compete for the top spot by participating in a series of mini-games heavily focused on platforming and maneuvering through a hefty crowd. With every round, players are eliminated until there is just one standing as the victor.

Players can join as teams or go solo in this mad dash through obstacles that would make the creators of Takeshi’s Castle blush.

Imagine Fortnite without the guns. That may not sound like much fun, but Rumbleverse proves the opposite to be true. The melee-focused combat of Rumbleverse forces players to go toe-to-toe in a fight to the finish. There’s no hiding out in the distance, picking off enemies until there are only a few players left. This game forces you into the open, and it does so with heavy-hitting hand-to-hand combat.

Like Fortnite, there are so many items scattered about to give you a leg-up on the opposition that it can get a little disorienting. Especially if you’re not used to games like these. But that abundance does lead to some varied gameplay with consistently delightful results.

Rumbleverse follows the typical format of battle royales with a few twists and turns to fit the melee-focused combat. There are few things funnier than watching 40 people punch each other in the face.

Blending the best of Fortnite and hero shooters, Apex Legends is a battle royale-hero shooter that pits 20 teams of 3 against one another on an always-shrinking island. Yes, it’s all things you’ve heard before, but the real crux of Apex is that each of the 22 heroes comes equipped with their own abilities. Unlike Fortnite, where a player’s power comes from the types of firearms they find, players that know how to effectively use their hero can really sweep the board.

There are other game modes besides battle royale, but it’s the core reason people log on to Apex. Because of their unique abilities, players have to work together verbally or nonverbally to effectively use their characters together. A cohesive team will know how to string together different skills to dominate the map and emerge the victor.

For example, one player can use Ash’s Arc Snare ability to tether an enemy to make them an easier target for Rampart’s mobile minigun ultimate. If you want to survive in Apex, it’s all about teamwork.

This isn’t technically a standalone game, but rather a series of servers available for Minecraft. Still, Minecraft is so influential and an icon of gaming that it’s worth pointing Fortnite fans towards this Fortnite-inspired game mode. Hunger Games primarily pulls from the movies and books it’s named for, throwing players into a battle for survival in a world full of perils.

The core mechanics of Minecraft’s survival mode are still intact as you navigate a world full of adventurers trying to stay alive. You’ll need to gather resources, keep from going hungry, and improve your arsenal to prevent becoming just another casualty on the battlefield.

Individual servers have their own rules and dictate how many players can join the fray, but the game generally remains the same. Hunger Games is certainly a clever use of Minecraft’s resources and, once again, despite the game’s age, servers are still full of people.

If we’re going to talk about games like Fortnite, it’s impossible to avoid discussing PUBG: PlayerUnknown’s Battlegrounds. Why? Because it was technically the battle royale game before Epic pivoted from its Save the World game mode into the battle royale space. Now, this isn’t a discussion on which does it better, as they both have their merits. As it turns out, they’re also different enough that you can enjoy them equally for unique reasons.

Right off the bat, you can tell PUBG takes itself a little more seriously. The art style is far less cartoonish and vibrant, which often lends to more players blending into the ground and sniping. In general, PUBG maps are larger than Fortnite’s, which tends to extend the game out a bit more. This also lends to more exploration and looting, which can result in some tense firefights in tight quarters if you stumble upon someone’s hideout.

PUBG is the battle royale game for those that find Fortnite to be a little too much. It’s slower-paced and less vibrant, but neither of those detracts from the overall experience.

Similarly to Minecraft, Roblox is the kind of game that can show up on many lists like this. It’s a customizable experience that allows players to create their own games. And wouldn’t you know, there’s absolutely a Fortnite-inspired battle royale. In fact, Roblox is similar to Fortnite in a few ways, as both games also have a Creative Mode where players can let their minds run wild.

Since different players can tackle their own version of battle royale, there are a few battle royale games to jump into. However, there are a few user-created games that look and play as identical to Fortnite as one can get in Roblox. Everything from the starting bus to the approaching storm and even some of the build techniques more skilled players use in Fortnite are here.

It’s neat just how close the Roblox version is to the real deal, though it does beg the question, “Why not just play Fortnite?”

You don’t become the most downloaded mobile game of 2019 by being mediocre. Available on Android and iOS mobile devices, Free Fire surpassed PUBG in popularity as players tried to navigate around the tight quarters to bring home that victory bacon. Free Fire lands somewhere in between Fortnite and PUBG with its visuals, and though it plays on an incredibly small screen, the gameplay still holds up well.

There are quite a few glitches that can hinder your time with the game. When it’s running smoothly, though, Free Fire is a very capable battle royale shooter with a lot to offer players. Customize characters, find your favorite weapon, and get to slaying your opposition to land at the top of the leaderboard.

If you’re not looking to jump into Fortnite so late in the game, Free Fire may be a good alternative to help ease you into the battle royale scene. There are so many similarities, that you may not even realize what you’re missing in Fortnite.