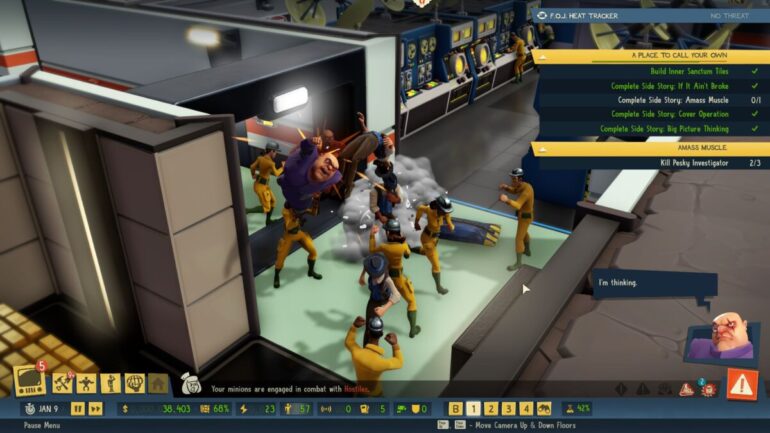 In Evil Genius 2, players will command a horde of minions to complete their clever schemes. They are, in fact, the life blood of an effectively operating lair. To best utilize the minions in Evil Genius 2, it’s vital to understand their functions and what roles specialist classes fill.

Here are the main minion types in Evil Genius 2:

And here’s everything you need to know about minions in Evil Genius 2.

The basic minion is the yellow-jacketed Worker minion. They cost nothing and are utterly disposable, yet the lair can’t operate and expand without them. A healthy number of Worker minions will ensure the genius’ plans are successful.

Worker minions will dig out rooms, place and operate items, extinguish fires, dispose of dead bodies, escort and interrogate captured agents, travel to the world to complete schemes, train into specialist classes, and fight off unwelcome enemies. In terms of fighting, Workers won’t last long, but they will at least buy time for the lair’s Muscle minions, Henchmen, and the Genius to repulse the enemy. Almost all specialist classes can also perform the listed basic functions, but only Workers can dig rooms.

If some Worker happens to be more useful than the average yellow jacket then they can be trained into one of three main specialist classes: Muscle, Deception, and Science. These specialist classes are usually salaried as they are only slightly less disposable than Workers, and will focus on specific tasks that Workers can’t do at all or very well.

Muscle minions are the security force or the metaphorical immune system of the lair. Of the specialist classes, they are the most focused on a single task (Deception minions are pretty focused as well), which is keeping enemy agents out. They will still be used for Global Schemes, dispose of bodies, and interrogate prisoners, but primarily they will act as an active security force.

Deception minions will populate and operate the casino cover operation of the lair and act as the first line of soft defence against the agents of the Forces of Justice. Where Muscle minions take the direct and brutal approach of combating threats, Deception minions will cower from fighting and instead bog down and distract any detected agents and incentivize them to leave the player in peace. Not only that, but Deception minions can also earn a decent amount of money through the Cover Operation as they can be told to scam tourists for their money.

Where Muscle and Deception minions keep the lair safe, Science minions are much closer to their lowly Worker brethren and ensure the lair is maintained and constantly expanding. Just like Deception minions, Science minions will avoid combat and focus their attention on repairing damaged items, carrying items from the depot into the lair, and researching new technologies to unlock new possibilities for the player.

A successful lair and a bid for world domination can’t rely only on a single type of minion. It’s a team effort, a disposable team effort that is, but not everyone can be as important as the genius, can they? The trick to Evil Genius 2 is understanding the function of each of the minions of finding the right balance to cover all lair needs at all times.

READ NEXT: 20 Best Strategy Games To Mull Over