Dune (The Graphic Novel): Lessons In Adapting A Classic 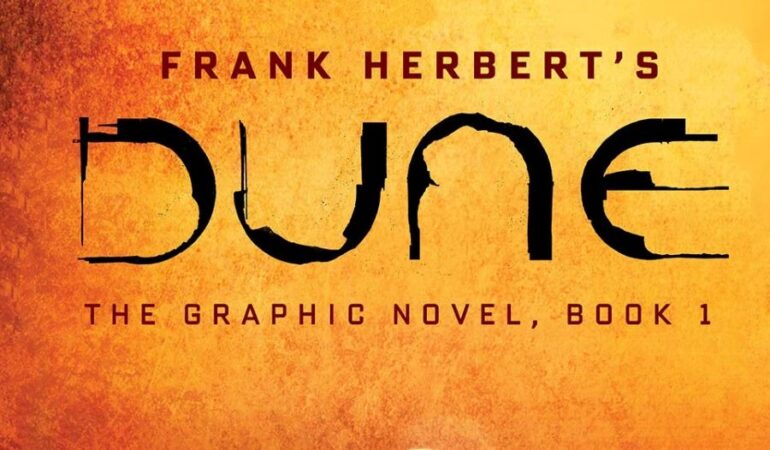 Deep in the human unconscious is a pervasive need for a logical universe that makes sense. But the real universe is always one step beyond logic.

Frank Herbert’s 1965 novel Dune is a seminal work of science fiction. It spawned five sequels as well as the large number of novels that have come after the author’s death, all set in the Dune universe. These additional books were written by Herbert’s son Brian Herbert, alongside his long-term collaborator, Kevin J. Anderson. The pair also adapted the original story for this book, the first volume in a trilogy of graphic novels retelling the story.

I’ve never actually read Dune, but that shouldn’t be a problem as the book is designed to appeal to a brand-new audience, alongside the fact that long-time fans are surely expected to lap up a new, visually appealing version of their beloved tale. Indeed, in their introduction Herbert and Anderson explain that the aim of the graphic novel trilogy was to make a ‘faithful adaptation’. That is, they were planning to change very little of the novel in the retelling. This is a bold claim; any adaptation of art from one medium to another requires changes to better suit the form of the new version. It just does. Having not read Dune the novel, I can’t say how many changes were made to suit the graphic format. But I can say if this adaptation technique was successful in terms of how the graphic novel stands on its own two feet, as it definitely should be able to do.

On the whole, the adaptation works fairly well. I was engaged with the story once I got past the usual science fiction problem of so many names to learn in such a short time. The dinner party scene was my favourite, with the sharp dialogue, and I am quite fond of Duke Leto, as well as interested in Paul and Jessica’s story. To get a small negative out of the way, the artwork, a key part of any graphic novel, sort of lets the book down. Raúl Allan, the artist, has worked for Marvel, DC and Valiant and his artwork is excellent in and of itself, with clean lines and muted colours. But honestly, it looks very much like a hundred graphic novels I’ve seen before, or it looks like the artwork for any number of Marvel comics I’ve seen recently, and although that is Allan’s style and he does it excellently, it doesn’t excite me or make the novel stand out in a crowd.

In aiming to keep the story faithful to the novel, Herbert and Anderson have employed a large number of ‘thought boxes’ throughout the narrative to replicate the inner thought processes of the characters in the prose. Again, not knowing anything about the original, these ‘thought boxes’ seem to me to be the main way that they are retelling the story. These boxes are obviously not unique to this graphic novel, but I have never seen them used to such an extent as they are here. All of the main characters have multiple moments, sometimes over whole pages, where the story is being told in their inner thoughts. There are so many of them that the boxes are colour coded for each character – Paul has a turquoise green and Jessica has orange, for example. I’d argue that in trying to keep the story faithful, it has been oversaturated with these ‘thought boxes’. There are times when a small, invented scene with more dynamic action would have served better to share some of this information than a character brooding alone in a room.

The new film adaptation of Dune was due out in December 2020, days after this book was published. It will be fascinating to see how the film (now being released in October 2021) compares to this graphic novel. Film adaptations are so very often a bit of a let down for fans, but more successful with people new to the story. This graphic novel was supposed to appeal to both groups, but I think that on the whole, the graphic novel will be more popular with existing fans who will enjoy how closely the story is followed in the new format. For new fans, the long scenes of introspection and inaction might prove to be more off-putting than the authors might realise.