This is the good kind of turf. 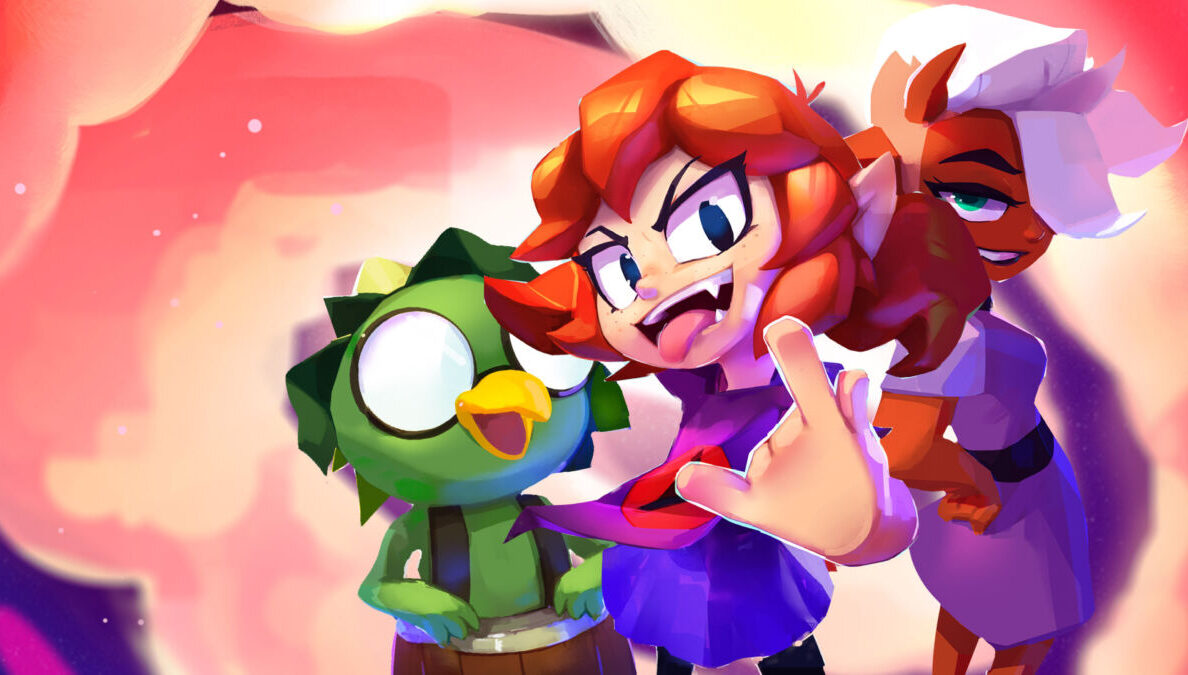 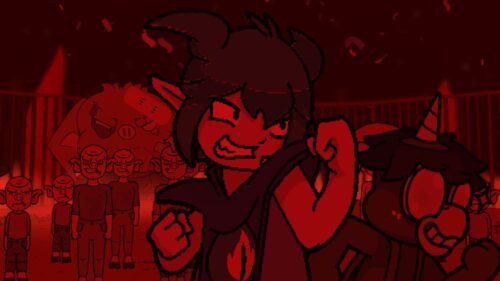 There’s a certain, intangible moment in any good 3D platformer where everything clicks together, the movement and abilities make sense and you’re able to perform incredible feats with relative ease. For Demon Turf, the latest release from Fabraz and Playtonic Friends, that moment comes during the game’s tutorial level, as the gameplay immediately feels satisfying and enjoyable, and that feeling mostly holds throughout the game’s runtime.

Set in the underworld, you control the 1000-year old demon by the name of Beebz, who’s decided to take down the long-standing Demon King and claim his throne. In order to do so, you’ll have to take over the four (demon) turfs that make up the underworld, steal their batteries (which are important for reasons), and unlock the final Demon King gate to take on the big guy.

It’s a simple story that fits a genre that doesn’t necessarily need a lot of exposition. “There’s a bad thing, collect stuff so you can fight the thing” is about all the motivation you need to get started. Still, Demon Turf’s plot and, more importantly, its main character Beebz, are quite entertaining. A lot of the conversations between Beebz and other characters are played for laughs, and there’s some good jokes thrown in for good measure, but Beebz shines through as a character with something to prove.

Whether due to her diminutive stature, lesser age in comparison to the other demons, or outsider status within her home of Forktown, Beebz has dealt with a lot of condescension in her life. Taking on the Demon King and becoming the new overlord of the underworld is a pretty lofty ambition, but aside from Midgi, a kappa stuck in a water barrel who offers tech support and hints, Beebz doesn’t have anyone who truly believes in her during most of her journey. Just more people to prove wrong when she finally does succeed.

Far from being just another cutesy platformer, Demon Turf’s genuinely striking art style gives the game some much needed edge over the competition. The mixture of 2D sprites moving in 3D space evokes similarities to the likes of Paper Mario, with lots of vibrantly coloured, emotive characters. The brilliant graphics are aided by an excellent soundtrack full of earworms that’ll get stuck in your head long after you’ve finished playing.

However, it’s the platforming itself that’s the real star of the show. Players are given most of the usual tools you’d expect when hopping from platform to platform, with double jumps, wall jumps and dashes all present. However, there’s also a suite of more advanced techniques like long jumps, triple jumps, side flips and others that can be used to gain more height quicker, or reach harder areas with relative ease. If you want to stick with basic techniques, you can, but the advanced tricks will help those looking to speedrun the game or beat the time trial trophies.

Demon Turf’s usage of this 2.5D graphical style even makes the platforming more satisfying to play. Perhaps it’s because, with 3D platformers being quite intense to play, Demon Turf never feels visually messy or unclear. Every sprite feels unique and easily distinguishable, so you know from a glance what Beebz is doing while using her various jumps, dashes and other abilities, even when you spend half the game staring at Beebz’s shadow so you know where you’re landing.

What makes the platforming feel a cut above the rest is the fact that you have the ability to set your own checkpoints. Holding down Y at any safe spot will prompt Beebz to slam a checkpoint flag into the ground, meaning you’ll respawn at that flag upon death. You can also teleport quickly between any placed flags, allowing you to zoom around the map hoovering up collectibles like cake and lollipops. You know, the best kind of collectibles.

It’s a devious little design choice, but one that makes Demon Turf incredibly compelling. Most of the time, huge setbacks to your progress in a level are because you simply forgot to put a checkpoint, which helps to mitigate any rage that might come with some of the game’s trickier levels. It also helps make any progress gained feel more impactful and rewarding too. Being able to literally stamp your flag on your own accomplishments never gets old.

It’s not all jumping and dashing though, as Demon Turf takes a novel approach to combat. Instead of just stomping on an enemy’s head, you use your punches and abilities to push and pull your enemies into different hazards. It’s all physics-based, and it gives Demon Turf something fresh over other games. It can be a bit ropey to use, but I’d rather have a platformer do something different with its combat than just “punch, head stomp, let’s-a-go”.

The worlds you visit are decently varied including sand-covered hellscapes, snow capped mountains, a neon-soaked metropolis and a tropical paradise, which feels like a bit of an odd-one-out in the underworld, but I digress. They all look lovely, which is the main point, but Demon Turf allows players to make a second trip through these levels once they’ve defeated a boss.

These second trip levels, which you’ll need to do to unlock the final gate, add some extra wrinkles to the already established levels, with new platforming challenges and obstacles to overcome, along with a different visual look. It might feel like a way to double the amount of levels for half the effort, but these return trip levels genuinely overhaul the established design in interesting ways.

Besides, even if the return trip levels didn’t exist, Demon Turf is still bursting with content through its additional side-quests, such as the Demon Soccer Golf, in which you use your physics abilities to guide a ball to a goal. There’s also combat arenas, additional platforming trials and photo hunts to complete, along with Trophies which unlock when you complete levels within a par time. There’s enough here to keep players going for a long time.

Unfortunately, there’s a couple of issues with the game that stop it from being truly exemplary. The boss fights at the end of each world aren’t quite up to the same standard as the rest of the game. They’re still fun, and offer their own problems to overcome, but you can’t set checkpoints like you can in the normal levels, making them feel somewhat less special. Considering three out of five of them revolve around punching something off a platform or into a hazard (including the final boss, which recycles old bosses before a “mirror” match), that doesn’t help either.

The other problem concerns the game’s last ability. Once you reach each turf’s boss, you unlock a new ability, with the first three being a hookshot, a wheel transformation that grants increased speed and drift capabilities, and an extended glide for those big gaps. All of these moves have tonnes of utility that can be widely utilised to achieve better times or reach harder platforms when replaying levels.

However, the last ability allows you to slow down time in a specific area, which feels unnecessary compared to the others. Granted, Fabraz created a couple of interesting puzzles with it, using slowed time pockets to displace platforms from hazards, but it feels like it’s been shoehorned in rather than an ability that comes naturally. On top of that, you activate the ability by firing a projectile in front of you, which feels unwieldy in comparison to other abilities. The return trip levels you unlock afterwards hardly make use of it either, which doesn’t help the feeling that this ability is just spare parts.

Still, the core of Demon Turf’s gameplay and story allows it to sit head and shoulders above not only some of its platforming peers, but to become one of the better games of 2021. While there’s a couple of flaws here and there, Demon Turf manages to both charm and challenge in equal measure, making for a wonderful experience.

An Xbox code for Demon Turf was provided by PR for the purposes of this review. 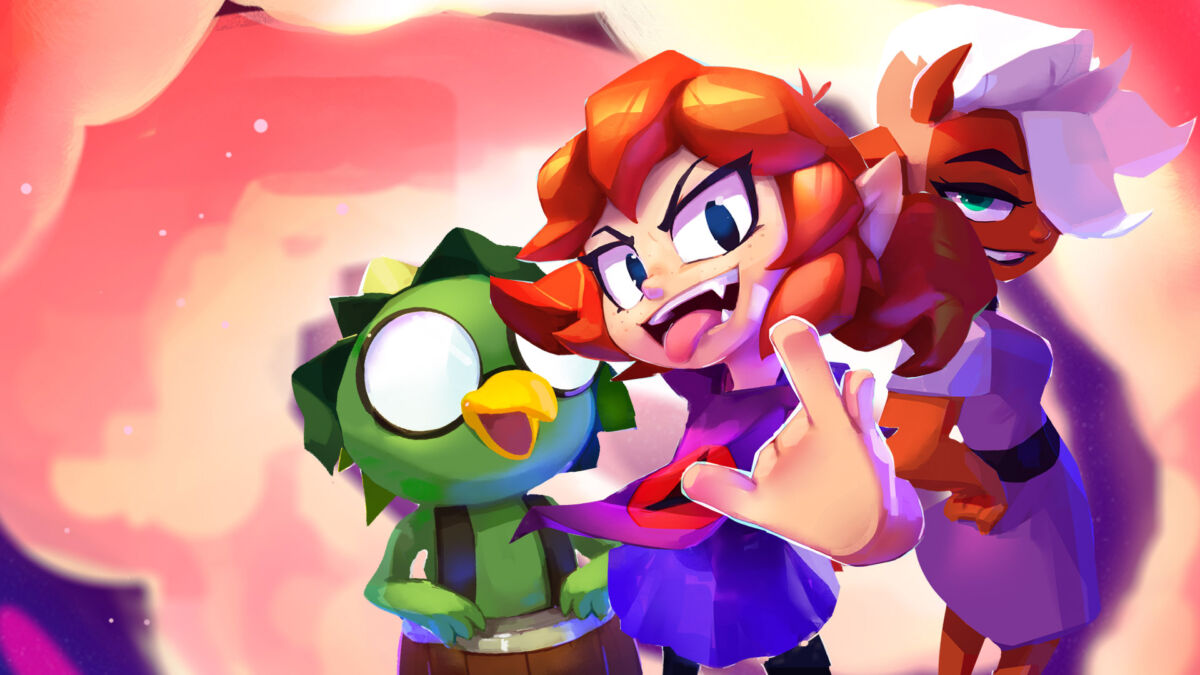 Verdict
Demon Turf’s few flaws do little to detract from an excellent 3D platforming experience that’s worth checking out, whether you’re a casual player or potential speedrunner.
8.5
Cultured Vultures is a pop culture website established in 2013 covering all things gaming, movies, and more. We eat your words.
All The News On The Biggest Games