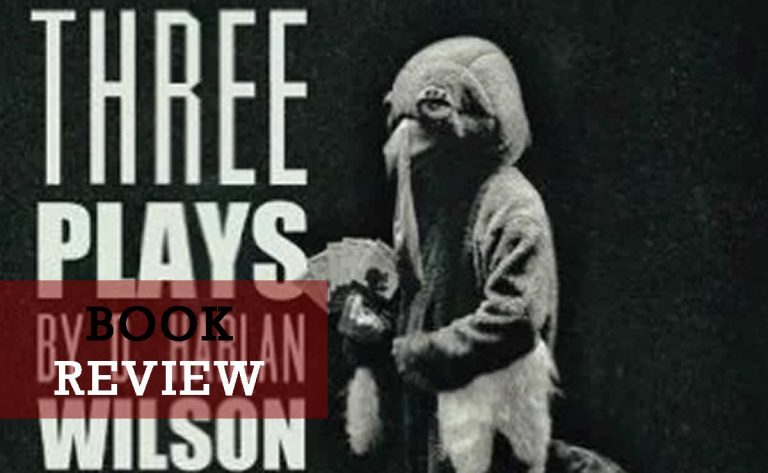 As the title of this book says, this is a book of three plays, “The Triangulated Diner,” “The Dark Hypotenuse,” and “Primacy.” D. Harlan Wilson has been all over the map with the books he’s put out. In addition to novels and short stories, he’s also published works of literary and film criticism and books that defy categorization. This book is his first foray into writing plays.

All three of the plays, like Wilson’s previous works of fiction, are bizarre, over-the-top, full of references to psychoanalysis and pop culture, and packed with humor.

The first play, “The Triangulated Diner,” features a hungover man named Roarke entering a diner. All he wants is a mimosa, but an uncooperative waitress, a violent woman named Big Ruth, and his own therapist are making things difficult for him.

“ROARKE [to himself]: I want a grilled cheese. But I NEED a mimosa.

WAITRESS [backstage]: Need? Don’t you mean you WANT a mimosa, which is to say, DESIRE a mimosa, just as you WANT or DESIRE a grilled cheese? If you don’t get a mimosa, nothing will happen. You will continue to exist. Hence need has nothing to do with it.”

One gets the impression that Wilson didn’t write these with an eye to getting them staged. The staging instructions are elaborate and absurd. At one point it calls for a Trans Am to drive across the stage, and that’s probably one of the least ridiculous parts. The imagery one gets in the stage of their head from this play more than makes up for this fact.

The play mixes tongue-in-cheek discussions of psychology and existentialism with slapstick humor to make for a read that works on multiple levels. Despite quoting them, one doesn’t need to be familiar with Lacan or Deleuze to enjoy this.

Also, Roarke is entirely right that sweet pickles are an atrocity.

The next play, “The Dark Hypotenuse,” is even more elaborately staged than the first. Calling for an intricate series of trapdoors, springs, and rotating audience seats, this one is even less likely to see the stage. This play is also revolves around the theories of Lacan in such a way that going in with some familiarity may be helpful. I’ll confess that I myself don’t know that much about Lacan. Wilson does provide a cliffnotes version of it at the beginning that is rather helpful, though.

Even so, this one is still enjoyable as a humorous piece without the psychoanalytic theory. The “story,” if you could even call it that, revolves mostly around the slapstick antics of a man named Starke, his wife, a monkey named Flang, and a Judge/King named Bun.

“BAILIFF: How dare you insult the viability of this trial! Bailiff, suplex the witness.

STARKE [upside-down in the air]: I’m not a witness! I’m a spectator! Don’t suplex me!”

This play is even more of a barrage of images than the first, even including a scene that acts out Francis Bacon’s painting of Pope Innocent X. It’s even more evocative and just as funny as “The Triangulated Diner.”

The final play, “Primacy,” is the odd man out. The staging is bare bones, even calling for an empty stage for most of the last part, and only featuring two characters. It’s very obviously influenced by Beckett.

The play involves the characters, called only Man and Woman, discussing how the Man is going to write his own obituary. They also discuss the various crimes the Man has committed, and the Woman’s irrational fears.

The humor here is more deadpan but it’s just as funny as the first two. It really shows Wilson’s ability as a writer that he’s able to create a play this radically stripped down compared to the incredibly elaborate ones preceding it, and have it be just as good.