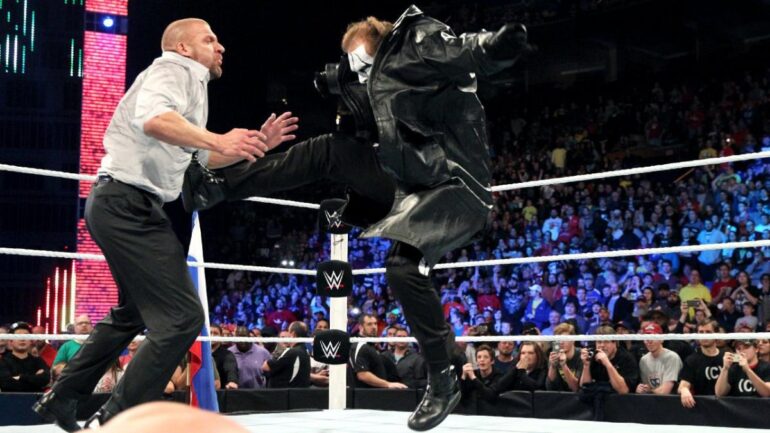 On Sunday 22nd November, WWE will celebrate not just the 30th anniversary of The Undertaker’s debut, but the 34th edition of Survivor Series. Renowned as not just one of the Big Four WWE PPVs, Survivor Series is also the second longest running PPV in WWE history (behind WrestleMania, unsurprisingly). The original focus of the PPV was eight or ten man tag-team elimination matches, but since the recent brand split, brand supremacy has taken precedence, including champion against champion.

As our own form of celebration, let’s look back at the nine best traditional Survivor Series matches over the last thirty plus years. This unfortunately means that the 2002 Elimination Chamber match will not be featured, but it also means thankfully there will be no Montreal Screwjob reprisal.

The Bolsheviks, Demolition, The Dream Team, The Hart Foundation & The Islanders vs. The British Bulldogs, The Killer Bees, The Fabulous Rougeaus, Strike Force & The Young Stallions

Believe it or not, there was once a time when the tag team division was a calling card for WWE. At the time, Strike Force were the reigning Tag Team Champions, having defeated the villainous Hard Foundation the previous month. The rules of this match dictated that if one member of a team were pinned, their partner would also be eliminated, increasing the stakes of the match.

For thirty-seven minutes, the tag team division of the 1980s took precedence, with The Killer Bees and The Young Stallions battling against the odds to survive for their team. However, the disqualification of Demolition eventually segued into replacing The Hart Foundation as the main heel tag team of the division. This culminated in Demolition defeating Strike Force at the following year’s WrestleMania, beginning a record-breaking run of 478 days as champions. For fans of classic tag team wrestlers, this is a fun watch.

The main event of the inaugural PPV had begun in January of that year when Hulk Hogan and Andre The Giant began their feud over the WWF World Heavyweight Championship. With the iconic moment at WrestleMania III where Hogan successfully slammed Andre and retained the title, the resentment between Andre and Hogan drew in other members of The Heenan Family. During their battles, individuals such as Orndorff, Patera and Bigelow turned face and flocked to Hogan’s side, culminating in this huge main event.

An old-fashioned main event, several stories either developed or grew from this match. Whether seeing Orndorff and Rude continuing their battle over who had the better physique, or seeing Hogan be surprisingly eliminated by count out, several new story beats are achieved. Firstly, Bigelow demonstrated the potential he had as a babyface, battling three huge challenges in a method perfected by Shawn Michaels in later years. Second, the twist of Hogan’s elimination set up the future shock of his losing the title to Andre The Giant the following year. A match with surprising repercussions for years to come.

The BodyDonnas vs. The Underdogs

For the majority of the 1990s, classic elimination matches rarely rose above solid, due to several teams being unnatural combinations to fill a quota. Once in a while though, the wrestlers involved took it as a challenge to overachieve, with the majority of the competitors in this match known as solid to good wrestlers. The main focus of this match was the recent heel turn of 1-2-3 Kid and an opportunity to put him over.

All eight men put in strong work here, with the final battle between Kid and Jannetty demonstrating a great back-and-forth. Considering that Jannetty has become a byword for the weaker partner in a tag team and Kid became synonymous with go-away heat, it’s a refreshing opportunity to see why both men once had great reputations.

The climactic battle between WWF and The Alliance, a partnership of former WCW and ECW wrestlers. Regardless of the multitude of issues that fans have with the overall storyline (no big WCW stars, too much focus on the McMahons, etc), as a one-off match, it’s almost unparalleled in size and star power, featuring nine competitors who held a major championship in WWE (plus Shane McMahon).

The first twenty-five minutes is great fun and builds up tremendous tension throughout, but the final four of Jericho and Rock against Angle and Austin takes it up another level. With the amount of history between all four (Rock and Austin at WrestleMania, Angle and Austin’s battle over the WWF Championship, Austin and Angle both betraying the WWF, The Rock’s belittlement of Jericho over the WCW Championship), those twenty minutes highlights why the heyday of 2000-01 is so missed.

The Brand Split originated due to the large roster WWE had after the defeat of The Alliance, and Smackdown gained popularity during that time due to its focus on wrestling and tremendous matches (amazing concept, I know). In comparison, Raw was blighted by the ‘Reign of Terror’, where a belaboured Triple-H created a stranglehold on the World Championship. However, there was a rare shining light in the battle between co-General Managers Eric Bischoff and ‘Stone Cold’ Steve Austin, that built to this Winner-Take-All match.

With Austin’s reign as co-General Manager on the line, he asked for help from an unlikely individual: former enemy Shawn Michaels. Austin’s fate was in other people’s hands, and the odds increased when four of his guys were eliminated, leaving Michaels in a 3-on-1 match against Orton, Jericho and Christian. In one of his finest performances in his entire career, Michaels portrayed a warrior in a dramatic battle, lulling the fans in for a possible survival, only for Batista and Orton to steal the victory at the last moment. Orton’s gradual rise to prominence began here.

By this time, The Authority had been in control for over a year, and when John Cena refused to join them, it developed into a huge Survivor Series match. To the surprise of The Authority, Vince McMahon announced that they’d be removed from power if they lost, raising the stakes. During the build-up to the event, Jack Swagger and Sheamus both got injured by The Authority, leaving Team Cena short, only for Ryback and Rowan to shockingly join. With Cena’s teammates putting their jobs on the line, the tension was massive.

The match was full of shocks, as Henry was eliminated in less than a minute, Rusev counted out after a splash through the announce table, Big Show helping to eliminate Cena after betraying him, and Ziggler left taking on Kane, Harper and Rollins single handed. In a match full of overbooking that actually helped the match as opposed to ruining it, Triple-H’s interference was ruined by a debuting Sting and Ziggler was, amazingly, the sole survivor, kicking The Authority out of power — for a whole month. Sigh.

To commemorate the thirtieth rendition of Survivor Series, Smackdown challenged Raw to three interbrand matches, including Smackdown’s best five tag teams against Raw’s five best, resurrecting the ten-team elimination match for the first time since 1988. Just like the 1987 edition, this match featured some of the finest tag teams in the business at the time, including The New Day, The Good Brothers, The Usos and American Alpha.

The final portion of the match had The Usos against Cesaro and Sheamus, the latter’s technical brawling meshing well against The Usos’ high flying pace in an awesome battle. Full of tremendous fun and some great interactions between talent, the chaos of the early going transitions into the highlight of the entire show by the end. Highly underrated.

In the real main event of the evening (Goldberg and Brock Lesnar was more of an angle than a true match), nine of the biggest current stars in WWE faced off (and Shane McMahon. I’m really starting to notice a pattern). At the time, Universal Champion Kevin Owens and Chris Jericho were made co-captains, while Strowman was an unbeatable monster. In comparison, all five members of SmackDown were announced, but Baron Corbin and then Kane were both replaced due to injury, leading to Shane being chosen (urgh). Styles was feuding with Ambrose, but Orton had joined The Wyatt Family by that time.

Beyond the nonsense surrounding brand supremacy when nobody cared and the inclusion of Shane, the match itself is a well-paced match that falls just short of the epic feel aimed for. However, The Shield reuniting to Powerbomb Styles, Strowman destroying poor James Ellsworth, Shane’s Coast to Coast being stopped in his tracks by a vicious Reigns Spear, the interference of Luke Harper, and The Wyatt Family surviving combined to create a damn good Elimination match. This is the match that likely led to the decision to continue the brand supremacy battle.

In 2019, NXT was promoted from a supposed developmental brand into an official third brand in its own right, being added to the battle for brand supremacy. This meant that every brand battle match featured a triple threat element, with one member of each team in the ring at the same time In a change from the usual, Team NXT had their team announced by Shawn Michaels on the Survivor Series pre-kickoff show, with the surprise inclusion of NXT UK’s WALTER. Unfortunately the ‘Ring General’ was quickly and unceremoniously eliminated by a McIntyre Claymore, suggesting a horrendous night ahead for NXT.

Instead, NXT battled back against overwhelming odds, Ciampa eliminating both Owens and King Corbin, Matt Riddle eliminated Randy Orton, and Keith Lee beginning his rise to the NXT Championship. The final three were Reigns of SmackDown, Rollins of Raw and Lee, who surprisingly pinned Rollins for the three count. In the final few minutes, Lee almost gained a nearfall on Reigns, and despite eventually losing, Lee earned the respect of an impressed Reigns.

In this list of tremendous elimination matches from the annals of Survivor Series, featuring grudge matches, tag team specials, and winner-take-Aall classics, there’s something for everyone in the lead-up to this year’s iteration of the event. Will Raw continue their history of victories for brand supremacy, or will the recent relaunch of SmackDown lead to a much desired victory?

READ NEXT: AEW Game Roster: Every Confirmed Wrestler So Far