There's plenty of classic comedies up on Netflix, and these are the greatest. 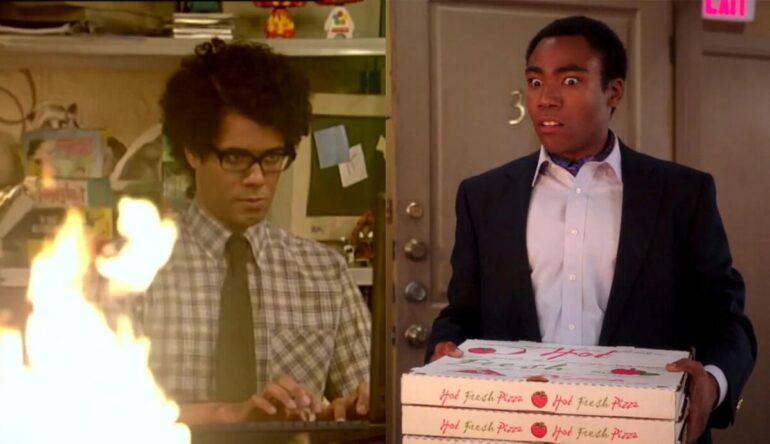 Netflix covers pretty much all genres, but it takes comedy more seriously than most. It’s home to plenty of stand-up comedy specials – but more importantly, as this list will tell you, some of the best comedy shows ever made.

In evaluating works of comedy, there is an awful tendency to try and praise the practitioners by saying they are ‘more than a comedian’ – as if the actual business they’re going about, what they do for a living, somehow isn’t enough. So while some of the entries on this list may make you think, or make you feel, and may well do those things very well, let’s make one thing clear now: that’s not why they’re in the top ten. They are here based on yuks, and yuks alone. Here are the best comedy shows on Netflix you should watch.

The Thick Of It is known for two things – incisive satire of the political class, and turning the use of profanity into an art form. These two things are not unrelated. Most of the brainpower of our best and brightest seems to be spent on increasingly elaborate uses of swear words, with whatever’s left over used for covering their behinds.

The political parties are never named, and it doesn’t really matter. And while the denizens of Whitehall are all wonderfully profane and self-serving, the standout can only be Peter Capaldi’s Malcolm Tucker, chief spin doctor and a creature of unrestrained bombastic fury. Even among the rest of the show’s gutter-mouthed crowd, he uses violent sexual imagery with real panache. The Thick Of It also has the rare honour of a transatlantic adaptation, Veep (annoyingly not on Netflix), which was on par with the original.

I’ve written about the charms of Derry Girls before, and while it’s undeniably tethered to a certain time and place (to wit, Stroke City in the ‘90s), its depiction of skin-crawling teenage angst crosses all borders. Sure, you may be living in the midst of an ongoing campaign of sectarian terrorism, but that all pales into significance when you’re hungrily trying to land a boyfriend – or when the formidable nun who runs your school turns up.

Unlike a lot of the comedy shows dealing with the teen experience, the leads aren’t a pack of chiselled, wealthy 30-somethings, and the adult characters aren’t pigeonholed into being shouting, blank authority figures. Refreshingly, most are improvising their way through life just as wildly as the main characters, and Grandpa Joe’s eternal, burning hatred of his son-in-law is really something to behold. The troubles may come and go, but the love-hate relationship with your own adolescence is forever.

Cringe comedy is a beast all of its own, where the laughs are equal parts ‘imagine if that happened to me’ and ‘thank God it didn’t’. David Mitchell and Robert Webb in Peep Show are the yin and yang of this: one uptight introvert, one party-boy extrovert, both awful little men who have awful little things happen to them.

What elevates this from being a standard cringe comedy show, though, is the point-of-view filming style. As they shudder and embarrass their ways through life, we see through their eyes and hear their private, inner thoughts. So yes, we are privy to all their absolute worst impulses, the kind of stuff you might think but never, ever say out loud. But then, we all have those thoughts. It wouldn’t be funny if we didn’t. Humour doesn’t necessarily need to be painfully relatable, but in spite of everything, Peep Show definitely is.

This was a very long-awaited addition to Netflix’s stable. Although it ended in 2014, when the streaming service picked it up in 2020 it shot into their ten most popular shows almost immediately. The show’s about nothing more complicated than a group of misfits attending the same community college who end up becoming friends.

It might be a fairly pedestrian setting, but that doesn’t even slightly restrict the story – you’ll find episodes playing around with every genre and story type in the book, from zombie apocalypse to authoritarian dystopia. Perhaps more importantly, it can make all of them funny. You’ll more than likely recognise at least one of the ensemble cast from elsewhere (most likely the prolific Donald Glover) – or, if not, recognise it from the image macros (most likely Donald Glover walking into a room where everything’s on fire).

It is an incredibly rare work that can make you both laugh aloud and also weep, let alone do both within two minutes. This is the unusual balance that Flowers successfully manages, even if only for a mere two seasons. Created, written by, and starring Will Sharpe, it’s a portrait of a family group who are deeply odd yet lovable, in spite – or because? – of their myriad flaws and neuroses.

While I am not usually one for content warnings, Flowers literally opens with a suicide attempt, which sets the tone for all that follows. This should give you a decent idea of whether it is for you or not. A million miles away from the standard setup of two actors in a lounge set with a laugh track, Flowers is a comedy show that’s raw and deeply affecting through every moment of its runtime.

The incredibly wealthy Bluth family fall on some hard times after their patriarch is arrested for, as he puts it, “some light treason”. As the rest of the clan pursue their own weird obsessions, or possibly just shiny objects, Jason Bateman’s only-sane-man desperately tries to hold it all together. Its unique style, heavy on cutaways, running jokes, and Ron Howard’s wry narration, made it an immediate hit and one of the best comedy shows on Netflix.

The sheer density of Arrested Development meant that you might get maybe half the jokes in a single viewing – it’s one of those shows where you’ll notice something new on each rewatch. Despite this, it ended up being one of the great outrageous cancellations of the 2000s, right up there with the strangled-in-the-crib Firefly. It would eventually be Netflix who revived it for two more seasons – admittedly with somewhat mixed results, but you can pretend they never happened if it comes down to it.

What if you died and went to heaven – but didn’t really deserve it? This is the problem faced by Kristen Bell’s atavistic layabout Eleanor Shellstrop in The Good Place, who, quite incredibly, has been mistaken for another Eleanor Shellstrop, one who had devoted her life to making the world a better place. Now, surrounded by the kind of people who are rewarded in the afterlife, she has to puzzle out how to fit in, and what exactly it means to be good, anyway.

All the great philosophical questions – like the trolley problem, so beloved of memes – are intentionally unrealistic scenarios, and would be utterly absurd if they were played out in reality. This is why The Good Place charges merrily down exactly that path, turning these ephemeral ideas into cold actuality, and even, yes, sending a runaway trolley careening towards some people who are just chilling on the tracks. Would it be right to derail it? That’s only one of the things you might find out.

If you watch BoJack Horseman, you don’t so much take it in, as you have it unexpectedly slap you hard in the face, over and over again. It’ll get you laughing, then hit you with a glimpse of BoJack’s tragic family history. It’ll make you cry, before you get walloped by some piece of absurdity you simply couldn’t get outside a cartoon – like the time BoJack goes to a film festival in the fish city, and, being underwater, it suddenly becomes a 1900s-style silent comedy.

Set in the dank, underground IT department of a very large company, The IT Crowd may come off slightly like a period piece nowadays. It was pretty much on the cusp of the era when ‘have you tried turning it off and on again?’ went from slightly fringe advice to something everyone who doesn’t live in a cave knows. However, the misadventures of what the CEO describes as ‘standard nerds!’ haven’t lost their charm – and with ‘nerd’ as a category expanding every day, more and more people will be in the same boat.

New hire Jen, an unashamed tech illiterate, is obviously meant to be the viewpoint character, but you’re just as likely to end up identifying with social inepts Moss and Roy. Whether they’re vainly trying to deal with a small office fire or making new friends by pretending to like sport, it’s all the sort of unlikely yet painfully relatable situations we can all find ourselves in at a low ebb.

When the unimaginably wealthy Rose family loses it all, and have to go and live in a small town they bought as a joke (this being the Schitt’s Creek of the title), it’s not so much a comedy of opposites as a comedy of talking-past-each-others. It’s a sort of reverse Beverly Hillbillies situation, but there’s no malice between the Roses and their new neighbours – there couldn’t be, since the worlds they know are simply too different for that.

Everyone involved being, ultimately, fairly good-natured doesn’t need to put a stop to the awkwardness, misunderstandings, and other elements of farce. It’s a fairly feel-good experience, which is perhaps why Schitt’s Creek became so beloved as the pandemic started to drag on – just the kind of gentle, outdoorsy kind of comedy show we were all craving at that point.