Schitt's Creek proves that a public serenade isn't such a bad thing if it comes from your "butter-voiced beau". 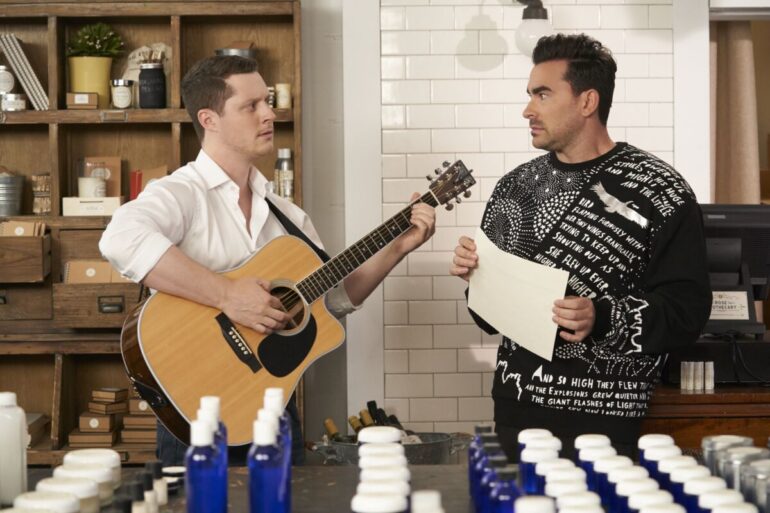 It’s no secret that 2020 has been the worst kind of year, so good news of any kind is reveled and embraced with enthusiasm. One such piece of news was Schitt’s Creek crushing it at the Emmys this year, winning for outstanding comedy series as well as sweeping all the acting categories. I was midway into the series by then, but I could completely understand why the show won, and why it is probably one of the best comedy TV shows for me and many others. Schitt’s Creek, for all its fun and humour, is about overwhelming loss, and the journey made in overcoming it.

When we meet the Rose family, they have been hit with devastating news; the loss of their wealth and empire, house and belongings, and the estrangement that comes with all this. They find themselves in Schitt’s Creek, in a place they never thought they would be, amongst people they would never socialise with. Initially, they all view the loss as temporary, and believe that their stay in the town is not a permanent one. But as time goes by, the distance from all that they knew starts to hit them, and while there is struggle coming to terms with this new situation, eventually, they all begin to embrace their lives in Schitt’s Creek, building connections and setting down roots, discovering that starting over may not be such a bad thing.

As with everything else in life, the same thing applies to TV; there’s TV you love in the moment, but may not love a few years down the road. I will always love Friends, Dawson’s Creek and Fleabag, because I return to watch scenes from each show every single year, while How I Met Your Mother and The Big Bang Theory were interesting to me once but aren’t anymore. I wasn’t sure where Schitt’s Creek was on this spectrum of beloved TV shows, until I watched the episode where Patrick (Noah Reid) serenades David (Dan Levy). If you are watching the scene as an isolated one, having never watched the series, the impact of the scene would be lost on you. But knowing the history of the two characters, and the build-up to this moment, makes it one of the most memorable moments in TV for me.

Patrick has been with women his entire life, and he never understood what was missing in those relationships – until he met David. For Patrick, David is the first man he has ever loved, but it’s also the first time that he loves while being truly authentic to who he is. For David, it’s the opposite. He has been himself in countless relationships, the problem is, they are all short-lived, leaving David to feel that maybe he is the problem, and that maybe no one wants him for who he is. So while things are great with Patrick, there is still doubt and the feeling of a termination point, because that’s always been the pattern for him – he loves, and they leave.

The episode starts with Patrick suggesting an open mic night to get more customers into the store, with David vehemently against it. Eventually, he allows himself to get roped into it, but is then surprised by the fact that Patrick will be performing at the open mic night, because the host has to do so. So the whole time, as we wait for Patrick’s performance, we feel David steeling himself for the second-hand embarrassment of watching someone you love do something so absolutely cringeworthy. And then Patrick starts singing, and things change.

As a viewer seeing things from David’s perspective, we don’t expect this, because like David, we were expecting Patrick to not be very good, and for us to laugh because he’s not very good. The episode does such a good job of setting up this expectation, which is not only held by David, but by his mother Moira (Catherine O’Hara) as well. There is a sweet mother-son moment before the serenade, as Moira offers to pull the fire alarm to save the both of them from embarrassment. But then Patrick sings, and we forget everything. All the doubts just melt away as we watch Patrick declare his love for David, and we see David accept this love with a shy ‘I can’t believe this is happening to me’ amused look on his face, trying to hold back his smile but failing.

Patrick’s performance is an acoustic version of Tina Turner’s The Best, and before this performance, I don’t think I ever really paid attention to the lyrics of the song before, or even realised how stunning they are. Watching Patrick bare his heart to David, singing about “a life time of promises and a world of dreams”, and the sincerity of all these proclamations just flowing from Reid’s voice, was enough to make me a crying mess. I wasn’t the only one; Catherine O’Hara couldn’t stop crying while shooting the scene, and Dan Levy himself cried when he first heard the arrangement of the song from Reid.

In film and TV, music can sometimes create powerful moments, and this was definitely one of them. There’s a smaller scene within this one, where Roland and Jocelyn share the news of their baby’s gender with Moira. Moira is still transfixed by Patrick’s performance, but she listens to them and is kind about the whole thing. It just adds to the abundance of love and happiness in the air.

Public declarations of affection can sometimes be so tacky (as numerous rom-coms have shown us), but somehow, while this serenade occurs in a public setting, with lots of people watching Patrick speak of his love to David, it still feels so romantically intimate. The low lighting in the room, the silence of a rapt audience, the exchange of looks between Patrick and David, Moira touching David’s hand and the tears that follow – it is all emotionally rich and absolutely beautiful. This song becomes a refrain of their relationship; of passion, of hearts stuck on each other, of hearts made strong by the best person – it is also proof that Schitt’s Creek is simply the best.