Among Netflix's endless banks of content are some quite superlative crime dramas. 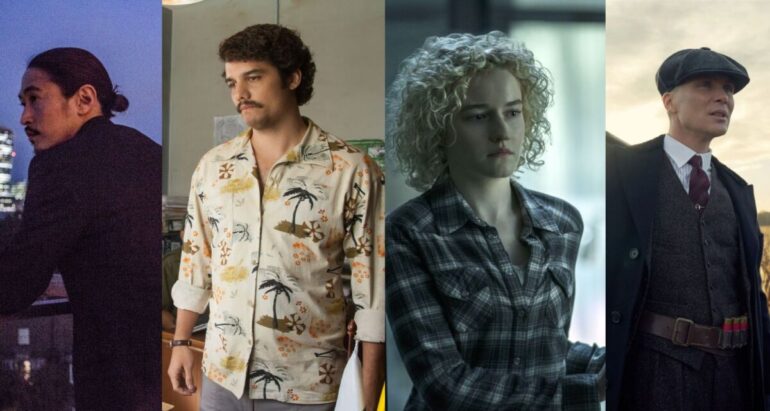 A lot of media is about escapism, and the crime drama might be the most obvious example of that: behind closed doors, buttoned-down, law-abiding men and women receive a vicarious thrill from imagining themselves as the murderous, charismatic maniac onscreen. You know it and I know it, don’t be embarrassed.

The genre’s been a surefire hit since the days of the original Scarface, and it was with mob family drama The Sopranos that TV started getting taken seriously as an art form. Now there’s a crime drama for all seasons, and here’s the best crime drama shows on Netflix you should watch.

You know how this story goes. Bryan ‘the dad from Malcolm in the Middle’ Cranston is diagnosed with lung cancer, and to pay the hospital bills, throws himself wholeheartedly into the meth business. He does his best to balance the wild-west life of the drug kingpin with being a suburban husband and father, and fails miserably. But the joy is in how he does it. The moments of tension, when things are seconds away from going fatally wrong, and of course all those grandiose lies he keeps spinning.

An honourable mention here for the prequel, Better Call Saul, also on Netflix – and which you could probably watch on its own, barring a few moments when characters from Breaking Bad show up unexpectedly and you can practically hear the studio audience cheer when they see this week’s special guest star pop their cheeky little head around the door. Originally, Saul was going to be a lightweight comedy spinoff. Instead, the formula and the characters created with Breaking Bad found themselves robust enough for another six seasons of material, which should tell you something.

Is Jason Bateman believable as anyone other than a put-upon suburban dad? This isn’t to say he gets typecast, but the pitch for Ozark could have been ‘Jason Bateman from Arrested Development launders money now’. He’s still got a dysfunctional family in tow, and the main difference is that all the shenanigans that exasperate him so are no longer quite as funny, since now he’s laundering money for a drug cartel.

In a this sort of hour-long crime drama, the most interesting people tend to be the villains – often colourful maniacs prone to florid speeches. Here, refreshingly, the standout and obvious MVP is Bateman’s sidekick Julia Garner, who plays the de facto head of a local family of petty criminals. And Garner gets her share of florid speeches too, though admittedly these are less ‘let me reveal to you my masterplan’ and more ‘I don’t know shit about fuck’. In fact, while a lot of crime dramas are decidedly a man’s world, Garner is just one of the women of Ozark who can give just as good as they get.

The true – or at least based-on-truth – story of all-time cocaine king Carlos Escobar. He’s the heavyset gentleman with the moustache who you’ll see gazing off toward the horizon, looking slightly morose. Surely this glum, plodding figure can’t really be the most wealthy criminal of all time, who was making millions of dollars a day and practically brought the nation of Colombia to its knees before him? Oh, but he is. It’s the same man, the man who defined the drug cartel and made the city of Miami what it is.

Narcos also features the federales who are trying to put a stop to drug trafficking, but they’re mainly present to give the viewpoint from the other side. This is very much Escobar’s story, his rise – and rise, and rise, and (spoiler alert) eventual fall. Wagner Moura, who plays the man himself, has been praised as the cornerstone of the whole edifice, and watching him it’s easy to see why. It is he who provides the emotional core, for whom all the conflicts really matter – and of course, nobody can stare into the middle distance quite like him.

Giri/Haji is Japanese for ‘Duty/Shame’, and those are the two obvious reasons why a Japanese detective would travel all the way to London in search of his wayward brother, a yakuza hitman. What does family matter in the face of serious crime? But what does serious crime matter in the face of family? These questions dance in the air from the very start, permeating everything we watch him get up to.

Giri/Haji is undoubtedly a crime drama, but it’s versatile enough that it manages to touch on any number of other genres along the way. Despite a supporting cast who are suitably hardboiled, including the talented Will Sharpe as a drug-addled rent-boy, it’s not just a work of unremitting bleakness. Instead it becomes oddly heartwarming as leading man Takehiro Hira travels through London looking for some answers and instead finds himself a weird surrogate family.

Don’t be fooled, this isn’t just stringing out a Coen brothers film over ten hours – it’s taking all that was good about the 1996 Fargo and lending that charming Coenish tone to bigger, beefier plots. That means more plots that sound oh-so-simple, more chances for everything to go wrong, and more violence being wielded with the precision of an artist’s brush.

Each season of Fargo boils down to the same story of hapless everymen seeing a chance to get something they want, and then almost immediately getting in over their head to a potentially fatal degree. It doesn’t get stale, though. This basic framework is robust enough to hang all sorts of different plotlines on it, and even play out in different periods of history – although they all seem to spiral somewhere around the snowy midwestern town of Fargo, Minnesota.

Where a lot of modern crime dramas simply make their villain-protagonist tough and cool, Hannibal goes a step further and makes its own main man outright sexy. Ever since Silence Of The Lambs, no matter what else was going on the Hannibal Lecter character has always been the main event. That’s why he’s in the title, and that’s why they made this spinoff in the first place, to let him run riot and be in cool control of everything that’s going on, in a suit as well-cut as the actual cuts he makes in those who get in his way.

This is at its core a standard killer-of-the-week setup, with an endless supply of bad guys and a pair of quirky not-quite detectives going out to catch them, but the whole picture is more than that, it’s about the sheer aesthetic. Everything is rendered as elaborately and showily as possible, whether it’s the grisly remains of the latest victim, or Hannibal’s delicious home-cooked meals – or, indeed, both.

Peaky Blinders treats us to the golden age of gangland – but it’s not set in Chicago, or even London. It’s in Birmingham, and not the one in Alabama either.

Despite the kind of provincialism you only get in the British Isles, Peaky Blinders is recognised internationally as one of the best crime shows out there, and Cillian Murphy’s flat-capped, besuited leader of the gang Thomas Shelby has already ascended to the canon of fictional tough guys. Think up a quote about rugged individualism and you can probably find it plastered across a picture of Murphy as he glowers and wields a sten gun.

Like Birmingham, the inter-war period also tends to get overlooked in the modern media. If a work is set in that time, usually it’s a matter of big parties and Great Gatsbys – and while Peaky Blinders does have a bit of that, each of those scenes is balanced out by three or four down by the canal or in an open-air steelworks. This is the grimy version of the 1920s, when people drank too much and were always smoking, when men were men, women chewed tobacco, and Europe was a tinderbox on the point of plunging into another bloody war. Those were the days, eh?

You can have a mystery without a crime, but historically, all the best ones are either murders or very high-level thefts, and Sherlock has both. There’s been plenty of Sherlock Holmes adaptations through the years, but this is the contemporary one, the one that launched Benedict Cumberbatch and Martin Freeman to international stardom, and it must be said it’s their chemistry that really makes this version one of the best crime shows on Netflix out there.

Even without its leading men, it would be all the clue-gathering mystery-solving fun of Doyle’s original stories combined with all the storytelling tricks and shorthand that have been pioneered since then. Each episode hovers around 90 minutes, feeling more like a film than a TV show, and the twists and turns will keep you guessing the whole way through. So effective were the constant mysteries, in fact, that the hardcore fans started to piece together a slightly frothing theory that the show was giving them subtle clues about a secret final episode.

From the mind of David Fincher – known for other psychological ordeals like Fight Club and Gone Girl – we have Mindhunter, the slow-burn story of the rise of criminal psychology and what everyone now knows as ‘profiling’. Back in the ‘70s is when it was all going down, when the FBI was trying out wacky new theories like this, and there was a murderous lunatic around every corner.

Mindhunter isn’t at all shy about wheeling out big-name, attention-grabbing, name-on-the-marquee serial killers, most notably Son of Sam and Charles Manson – but never reduces them to slasher-style villains. Instead, like its protagonists, the show is always seeking to understand them as people, however monstrous they might be. It’s a thoughtful, cerebral experience that’s more about battles of wits than gunfights.

10. How To Get Away With Murder

Some titles are a wild misreflection of the show they’re attached to – but not this one. A gaggle of wide-eyed law students and their acerbic professor end up putting theory into practice by, yes, trying to get away with murder. Although you may end up hoping they don’t, just so you can see what kind of a defence they can put together.

Despite the stiffly self-serious tone, and the veneer of legal realism, as a crime drama How To Get Away With Murder is far more drama than crime. The narrative is never satisfied with a simple explanation when they could use a melodramatic, implausible one instead, and in the courtroom this quickly becomes an absurd joy. Stakes are pushed higher than they have any right to be, and the twists build and compound upon each other beyond the point you might have thought possible.