Last but not least... 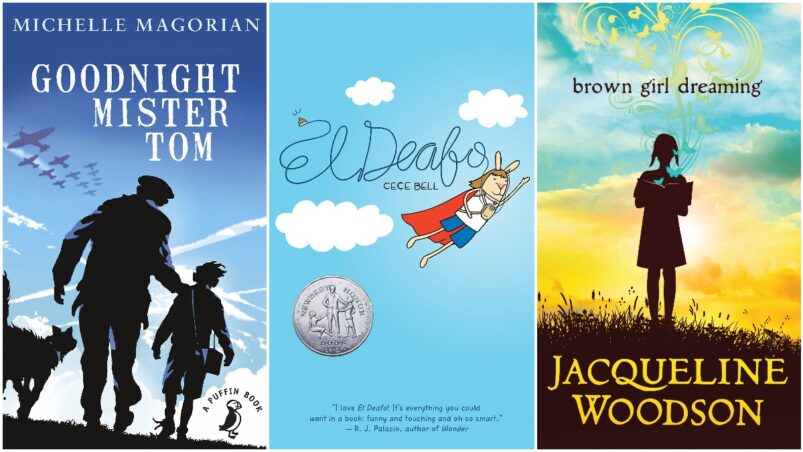 By the age of 10, some kids are reading YA. Some are into the classics and some love graphic novels. Some still love the books they loved when they were younger, and some are looking for something new. The great thing about the best books for 10-year-olds is the variety available, and the fact that these older kids know themselves and what they love so well they can practically be left to get on with it. But if you have a 10-year-old who still likes to share stories with you, or maybe needs a nudge to try something new, then this list of the best books for 10-year-olds should give you a good place to start.

The Best Books For 10-Year-Olds

Brown Girl Dreaming, Jacqueline Woodson’s autobiographical poetry, reads so much like a classic that it’s hard to believe it was only published in 2014. The format is unusual for children – non-fiction poetry is not a big seller – but it has been charming readers for years now. If you have a kid that likes trying new things, this is definitely the book for them.

Through free verse, Woodson tells the story of growing up as a ‘brown girl’ born in the 1960s, the same year that Martin Luther King gave his most famous speech, only a few years after Rosa Parks refused to give up her seat on the bus. Woodson’s poetry is stripped back and frank, and gives kids so much new perspective.

2. The Boy at the Back of the Class – Onjali Q Raúf (and Pippa Curnick)

There can be few things more important right now for the best books for 10-year-olds to be doing than teaching kids about the most important issues in the world – and surely one of the most important is the ongoing refugee crisis. That’s where a book like The Boy At The Back Of The Class comes into its own.

The boy in question is Ahmet, a Syrian refugee who is struggling to adapt to the new environment he finds himself in. Luckily, there are new friends to be found in the class, who want to help him as best they can. The Boy At The Back Of The Class unapologetically preaches love and acceptance, and that’s no bad thing.

Jeff Kinney’s books are the sort of thing that reading snobs look down on; riotous easy reading, full of fun, is too often seen as a waste of time for readers of any age. This is, of course, complete nonsense. Whatever people want to read – especially kids – they should be allowed to read. And for many young reluctant readers, Diary Of A Wimpy Kid has been a gateway to reading. Kinney should be praised for his contribution, not derided.

Greg Heffley is the Wimpy Kid in question, a boy recording all of his thoughts as he navigates the first year of middle school and his slightly crazy family. These books are incredibly popular for a reason, and the humour that shines off the page is definitely one of the main factors that kids love.

Like The Boy At The Back Of The Class, El Deafo makes the list of the best books for 10-year-olds because it has a lot to say on ongoing topics of conversation, as well as being a great read in and of itself. Cece Bell chronicles her own hearing loss in this graphic novel memoir, a story which it would do any child good to engage with.

In this very funny book, our main character is saddled with a hearing aid called the Phonic Ear, which gives her the ability to overhear things that she shouldn’t. Isolated from her peers, all she wants is to find a friend. Only by harnessing the power of the ear does she find her place in the world.

Goodnight Mister Tom is a true modern classic; first published in 1981, with the magnificent film starring John Thaw released in 1998, it still is going strong and truly deserves its place on the list of the best books for 10-year-olds. There is a quality to this novel and story that is hard to define, but grumpy old Tom Oakley will be a gateway character for many kids when it comes to understanding the complexities of the human experience.

It’s 1939 and William Beech has been evacuated to the countryside. He’s a deprived, anxious child and it’s only under the care of the reluctant Tom Oakley that he begins to flourish. But when his mother demands he returns to London, Tom realises that something’s very wrong with William’s home life.

The Hobbit doesn’t really need any introduction when it comes to a list of the best books for 10-year-olds. Tolkien’s Middle Earth is the ultimate fantasy playground and for many people over the decades, The Hobbit has been the gateway drug. If your kid has any interest in fantasy at all then this book needs to be delivered into their hands. And honestly, the same can be said even if they aren’t completely sold on the genre.

Bilbo Baggins is the Hobbit in question, living his comfortable and easy life in the rolling hills of the Shire. When a bunch of dwarves and a troublesome wizard turn up on his doorstep looking to include him in an adventure, Bilbo is reluctant to say the least – especially when he hears there is a dragon involved.

Bill Bryson, best know for his hilarious travelogues, also writes on a variety of other topics, and one of his most popular efforts was A Short History Of Nearly Everything – a triumphant success in scientific writing for the average reader. In A Really Short History Of Nearly Everything, that book is distilled down for young readers into a beautifully illustrated volume.

The book covers everything from the Big Bang to the mysteries of time and space, to the scientists who make all this knowledge possible. Bryson’s style is simple but never patronising, making it the perfect read for kids who want to know more about the universe and their place in it.

Like The Hobbit or Goodnight Mister Tom, Roll Of Thunder, Hear My Cry is the type of modern classic that should be on the list of the best books for 10-year-olds. It’s a harder read than some of the other books collected here, but there are many kids of this age looking for a more difficult book and they shouldn’t be held back.

The third book in a series – but by far the most popular – Roll of Thunder, Hear My Cry focuses on Cassie, growing up black in 1930s Mississippi. She doesn’t really understand a lot of the politics of her time, but when mysterious riders arrive in the night intent on destruction, she begins to see how to fight for what she believes in.

Morris Gleitzman made an appearance on our list of the best books for 9-year-olds with his game-changing Once. He’s here again with Two Weeks With The Queen, a quieter and more thoughtful novel that nevertheless ends up breaking hearts just as much as Once manages to do. Gleitzman is not nearly popular enough outside of his native Australia and very much deserves to be.

Colin is sent to England to stay with relatives when his little brother is diagnosed with cancer, and he’s not happy about it, sure that his brother is just doing it for attention. Colin hatches a plan to ask the Queen if he can borrow the best doctor to go to Australia and prove this theory. Two Weeks With The Queen is a funny, heartfelt and deeply tragic novel that will keep more confident readers turning the pages.

It’s impossible to have a recommendations list on Cultured Vultures without including Terry Pratchett, and finally here he is on the best books for 10-year-olds. The Wee Free Men wasn’t his first book for younger readers – or even the first Discworld specific book for kids – but is it the first in the Tiffany Aching arc, a young witch who is, objectively, one of his very best and most enduring creations.

In The Wee Free Men, Tiffany – witch-in-waiting – is defending her land and her family armed with only a frying pan and her own good sense. When she meets the Nac Mac Feegle – six-inch high sheep rustling warriors who made a brief appearance in Discworld novels earlier in the series – Tiffany soon finds that her destiny is to battle the Queen of the Elves herself. And that’s only the start of her story.

Who Let The Gods Out? is the sort of riotously fun book that deserves a place on any list of the best books for 10-year-olds. The Greek gods are a gift that keeps on giving, and Maz Evans makes the most of them here by ensuring that the family is hilarious and just a little bit ridiculous too. But there is also a surprising depth of emotion in these books that kids will appreciate too.

Elliot is the human boy with the problems, so he wishes on a star. Unfortunately, the star he chooses is Virgo and once she crash-lands on his farm, she is not impressed with Elliot at all. Especially when they both accidentally release the evil Demon of Death and have to call on the gods to come and help them sort it all out. Kids will be clamouring to read the sequels as soon as they’ve finished this one.

R.J Palacio put something great into the world when she wrote Wonder, a novel about accepting everyone is different and that only good can come from recognising the good in one another. The book spanned a film that was aggressively just alright, but the real joy in this story comes from the heart-warming prose and the slowly revealed sense of peace that unravels over the pages.

August is a kid born to stand out, however much he might hate it. He was born with a facial abnormality that leaves other kids screaming, and home-schooled because of it. But when he finally goes to real school, he has to convince his classmates that underneath, he’s exactly the same as they are. August is a kid with a huge heart, and it isn’t long before he has new friends to recognise that about him.

READ NEXT: 12 Best Books For 3-Year-Olds