A rally good game to wind down with. 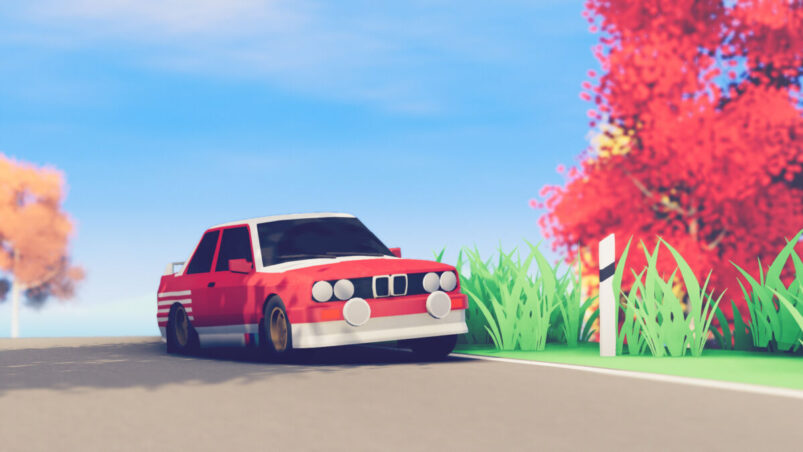 For the most part, racing and driving games tend to be exciting affairs, in which you’re pushing a high performance vehicle to the peak of its abilities, trading paint with other drivers and competing to be the fastest out there. It’s typically a formula that won’t fail to get your pulse pounding. However, racing games can be so much more than that, and Art of Rally is the proof, because there’s something intangible about its design that makes it so relaxing.

That’s even after I crash into a rock, flip three times and set my car on fire.

Art of Rally takes players through the golden age of rally, allowing players to get behind the wheel of fictionalised versions of classic rally cars. You’ll even travel around the world as part of the game’s career mode, tackling rally stages that combine the harshest elements you’ll find in off-road racing, but if that sounds like a bit too much for you, you can hop into free roam, explore some expansive environments and enjoy the thrill of driving at your own pace.

I was initially skeptical about the idea of Art of Rally, largely because rally games have never been my forte. There’s something about the physics or the way rally cars handle that doesn’t make sense to me. You’re meant to be able to throw cars around turns at high speeds, but whenever I do it, I’m headfirst into the nearest tree, but trying to brake and turn effectively like I would in other racing games tends to slow me down to a crawl.

Art of Rally isn’t exactly much different in that respect. I’m trying my best to make it around corners effectively, but I’m still wiping out harder than a contestant in, y’know, Wipeout. However, Art of Rally creates a calming atmosphere with its wonderful, synth-laden soundtrack, simplistic and appealing visuals and a lack of any real pressure.

Sure, there’s a career mode, in which you move through the different periods of rally history, celebrating the best that the sport has to offer. In that mode, you’re competing against other racers for the best times on a given stage, but it’s all fluff. It doesn’t actually matter. You don’t see anyone else racing, it’s only ever you, and there’s something both isolating and liberating about that.

You don’t need to worry about following someone else’s racing line, or if someone else is going to try and ram you off the road. It’s just you versus the road, and there’s a magic in the way Art of Rally achieves that. Again, there’s some kind of strange intangible about it, but where other rally games or solo racing games have been harder to get into, Art of Rally is just incredibly addictive. Maybe that’s because the mechanics are easier to learn, or because there’s less pressure to learn them. Then again, maybe it’s because I can dick about in free roam if I get bored or frustrated.

Now that the game has launched on Xbox Game Pass, Art of Rally has a chance to succeed on a grander stage than ever before, and it should. The mix of simplistic but aesthetically pleasing visuals combined with the addictive gameplay makes for a racing game worth checking out. Just don’t be surprised if you hit plenty of trees along the way.