The Queen's Gambit is one of the best TV shows on Netflix right now - and here's why you should totally watch it. 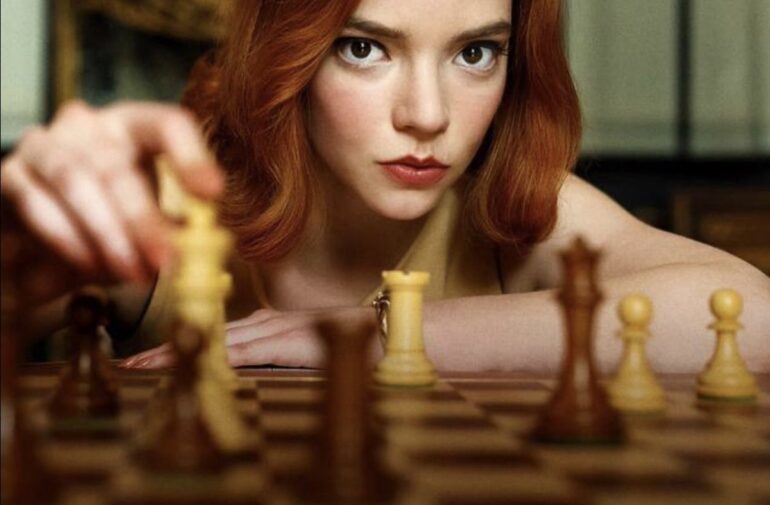 I stumbled upon The Queen’s Gambit over the weekend, and instead of doing the proper thing, which is to take my time with the series, I binge-watched all seven episodes in two days. The last time I did this was when I was watching HBO’s Chernobyl, so you know that this Netflix series is good stuff.

The Queen’s Gambit follows chess prodigy Elizabeth Harmon (Anya Taylor-Joy), from her younger years as an orphan at Methuen Home. This is where her fascination with chess began, and over the years, this fascination turned into a compulsion – a need to win at all costs. As with all geniuses, there comes the ebbs and the flows, and Beth finds herself dancing on the line of madness, wondering if she can conquer it or be swallowed by her addictions.

Here’s why you should check it out.

I've watched a lot of TV during this cursed year–I know I'm not alone–and the best of the best is THE QUEEN'S GAMBIT, on Netflix. Utterly thrilling. I thought nothing would beat THE TRIAL OF THE CHICAGO SEVEN, but this does.

Funny story, the whole reason I decided to watch the series was because Stephen King recommended it. I follow the man on Twitter, and he calls it “the best of the best” of TV, and “utterly thrilling”. If a series is able to thrill King in such a way, as well as compel him to bestow heavy compliments, then yes, we should all listen and follow suit. I know I did.

I have loved Anya Taylor-Joy ever since I saw her performance in The Witch. Her doe eyes and facial expressions are bewitching to watch, and it is amazing to see how Beth develops over the series. In her hands, Beth is flawed and completely relatable. This is no easy feat considering the hubris that is a part of Beth’s characterisation – after all, she knows she’s a chess genius.

She is well-supported with a truly amazing ensemble, with the likes of Marielle Heller, Bill Camp, Thomas Brodie-Sangster and Harry Melling. Camp’s Mr Shaibel doesn’t say a lot, but subtly communicates such care and feeling for Beth, as he teaches her how to play chess. Brodie-Sangster plays against type here with his character, the self-loving Benny Watts, yet at the same time, we see genuine concern and worry for Beth.

But I have to say that Melling as Harry Beltik is truly the surprise for me. You would know him best as Dudley Dursley in the Harry Potter films. He has been playing a few villainous characters in Netflix movies (The Old Guard and The Devil All the Time come to mind), and I was expecting the same thing for this series. But he is softer here, more vulnerable, and once again we see how despite the fact that Beth is an orphan, she gathers to herself people who truly care for her. These characters are all so nuanced, and are some of the most compelling TV characters I have seen in a while.

The Queen’s Gambit, as is obvious from the title, is about chess. Chess lovers would find much to enjoy, but I think there is plenty of good stuff for us non-chess people as well. When we think of chess, we think of people stuck in rooms for hours, carefully pondering each move. In the hands of Scott Frank and Allan Scott, chess becomes this dynamic thing.

Every single competition is framed differently, and they know what to showcase to pique the viewer’s interest. For example, we sometimes see the beginning of a chess game, and then this is interspliced with moments of Beth narrating the events. As she gives the low-down of the game, and all the moves she made against her competitor, sometimes we aren’t sure if it played out in her favour. The scenes where Beth conjures a life-sized chessboard on the ceiling to play through her moves feels authentic to how a chess player’s mind would work.

Watching the series inspired me to maybe start up chess again – don’t quote me on that though.

What I liked about the series is the different perspective on male-female relationships. The men in Beth’s life are bewitched by her of course, but she never needs a romance to define her and who she is. More importantly, these men become collaborative parts of Beth’s life, and this takes precedence over any possible romance. Beth constantly feels like she needs to go out of her way to prove herself because oftentimes, she is the only woman in room filled with men.

The men are quick to put aside their egos when they realise how good she is, and while the competitive spaces are still there, the learning space is greatly emphasized. This allows the series to truly focus on Beth as an individual, her neurosis and struggles, as well as shine a light on her brilliance.

5. The Hidden Spaces of Female Ennui

Beth is juxtaposed with a lot of the women in the series, in the sense that her genius accords her a sense of purpose, while the women of the time find themselves stuck in the domestic space, forever playing homemaker to the whims of their husbands. This is clearly seen from Heller’s Alma, who drinks heavily to escape the ennui that overwhelms her life. The camera frequently pans to the shopping bags of women at the stores, and a bag of liqour is almost always in sight.

Beth is plagued by a different ennui, one that is framed by being too good too early, and then allowing herself to fall prey to the world of vices and addiction, either to escape her immense loneliness, or drowning her sorrows because she cannot deal with the possibility of losing. Amidst the ennui that threatens to inundate everything, we do see female camaraderie and support, from Alma and Jolene (Moses Ingram). Thus, both male and female spaces are well-developed in the series, delivering a balanced narrative – everything is strategic and well-placed, much like chess pieces on a board, and that’s what good TV is all about.