Chernobyl goes out in fine style, with the trial to determine who's really responsible for the disaster unexpectedly turning out an answer. 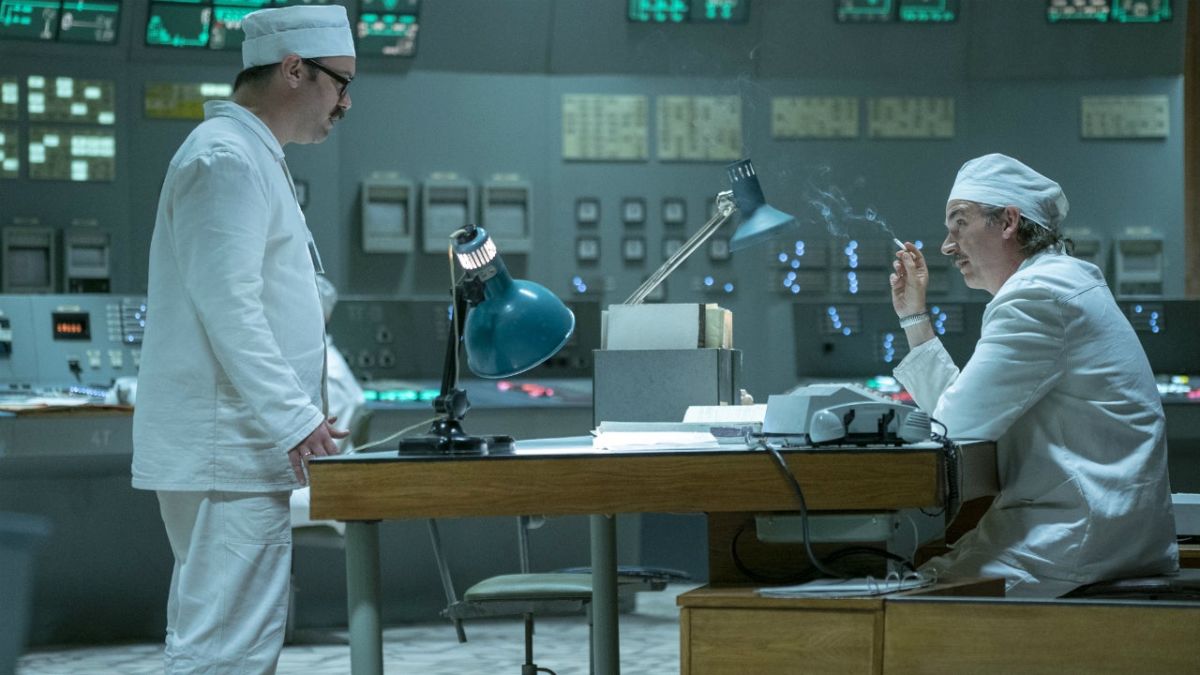 Up until this point, Chernobyl has distinguished itself with frighteningly real reconstructions of the disaster and its aftermath. They’re not what you might traditionally call ‘action scenes’, there’s no gunfights and only a few explosions, but it’s a million miles from being a talkie and has tended towards real white-knuckle stuff. Now, in the finale, Chernobyl switches gears on us.

The bulk of ‘Vichnaya Pamyat’ is a straight-up courtroom drama, although you could argue that phrase is a tautology. Courts always have an element of drama to them, that’s why Better Call Saul didn’t end up as the most tedious show imaginable. And in authoritarian states like the Soviet Union, with their proud tradition of predetermined show-trials, the line between court and drama practically vanishes. Legal proceedings become a performance, intended to rubber-stamp the consequences which were decided long ago.

Shcherbina comes off like an old hand at the performance side of it. He is, after all, a party man, and Stellan Skarsgård plays it perfectly at ease standing in front of a judge to denounce people, wordlessly assuring the audience this isn’t his first rodeo. Even Khomyuk’s testimony is more of a narrative than anything, actually ending on a cliffhanger. And this cliffhanger is, of course, a lead-in to Legasov’s testimony. He’s the protagonist, he’s the main event here.

One thing that weakens Legasov as a character, even if it’s to the advantage of the show as a whole, is that his function is in large part to explain nuclear physics to laymen – both those within the show, and also those watching at home. Obviously, in the trial that makes up most of ‘Vichnaya Pamyat’, this comes front and centre. It’s the broad-strokes version, without any lengthy discussion of the facts and figures (again, the desire to not be the dullest show ever), but given the impact Chernobyl achieved with a mere five episodes you wouldn’t be surprised if it prompts an uptick in people studying nuclear physics.

But for all that Legasov’s a bone-deep science dweeb, the trial all turns on what he says. Not Dyatlov’s fate, he was doomed from the start, but rather bringing to light the deeper systemic problems with the RBMK reactor. The fact he’s punished for this, and the Orwellian way in which he’s punished, is an entirely different class of horror to the disaster. The West holds perjury and libel to be crimes, and punishes them accordingly, but does not un-person people simply for saying things. Still, Legasov ends ‘Vichnaya Pamyat’ having at least won a moral victory, and even if KGB man Charkov really can completely hush up his testimony – something Charkov seems a bit too assured of – it’s still a fairly open secret, and one rapidly becoming opener.

The tragedy returns when we’re told that it’s his suicide that made it truly public knowledge. The miniseries opened with the night of Legasov killing himself, so that, like the disaster itself, was a foregone conclusion. He joins the ranks of all those who did their duty, went into the contaminated areas, and paid for it with their lives. And while the show covered a number of those people’s stories, it seems dramatically appropriate in a vulgar way that our protagonist should go out like that too, rather than any suggestion that death is only for extras.

The few scenes which ‘Vichnaya Pamyat’ gives us outside the courtroom are mostly flashbacks, and most of those put us back in Chernobyl’s accursed control room, as we were for a lot of the first episode. But like the first episode, we also get a cold open, and whereas the premiere took us into the future, this takes us back into the past: into Pripyat, before everything went wrong.

It’s here we finally get to see Dyatlov’s actual motivations. Paul Ritter, incidentally, deserves credit for playing such an awful man, especially since too many people blame the actors for their characters. Dyatlov’s been framed as the single person most responsible for all of this since that original cold open, and he’s a dick, but he’s not a supervillain, he wasn’t out to cause the most destructive nuclear accident in history. What it comes down to is more tawdry than that – essentially, it’s money. And not a bung from mysterious foreign agents, or anything so dramatic, no, it’s simply him and his bosses wanting to rush through the test so they can all get promoted.

This is the butterfly effect writ large. A couple of middle-managers brush off safety concerns, and suddenly little children are getting cancer all over Ukraine and Belarus. One of the finest pieces of praise I ever saw of The Wire (like Chernobyl, deemed one of HBO’s greatest-shows-of-all-time) came from political cartoonist Tim Kreider, who argued that the strength of its plot was in imitating “the arbitrary and chaotic workings of real life…events have unexpected consequences; the consequences compound one another, amplify and distort and echo in ways no one could have foreseen.”

That description doesn’t quite apply to Chernobyl, since the consequences were foreseen. But for them to then be avoided would have required a very different ethos than that of the Soviet Union, who preferred to duct-tape over the cracks in their infrastructure and issue dark warnings about the dangers of asking too many questions. Which butterfly flapped its wings first – Dyatlov, or the Supreme Soviet? Which wingbeat ultimately caused the hurricane?

It’s only fair to quote the actual Legasov’s words here. Even though the show opened on him pointing specifically to Dyatlov, the real man was more than aware of the systemic problems in play, and shortly before his suicide in 1988, he described the Chernobyl disaster as the ‘apotheosis of all that was wrong in the management of the national economy and had been so for many decades’.

‘Vichnaya Pamyat’ ends on one of those ‘where are they now?’ sequences, so beloved of dramas depicting real events. It’s a trope which has come a long way since the slideshow at the end of frat-comedy Animal House. As with the facts surrounding many historical events of note, it presents occasional rays of hope (those members of the cleanup crews who, against all odds, are alive today) inbetween underscoring the true, lingering horror of it all (a fresh sarcophagus for the stricken power plant was put in place just two years ago). Sometimes these sequences seem a little too much like tying off the loose ends as neatly as possible, but in Chernobyl’s case it’s only right that it emphasises the people involved. Unlike disasters like earthquakes or hurricanes, Chernobyl was a wholly man-made affair. We as a species got ourselves into it, and we got ourselves…well, it’s largely under control now, anyway. Chalk it up to experience.

Verdict
Vichnaya Pamyat may lack the sheer spectacle of the rest of the miniseries, but it’s still an excellent conclusion, and remains a stark warning from history.
9
Cultured Vultures is a pop culture website established in 2013 covering all things gaming, movies, and more. We eat your words.
All The News On The Biggest Games