4 Things WWE Need to do Now Wrestlemania is Over 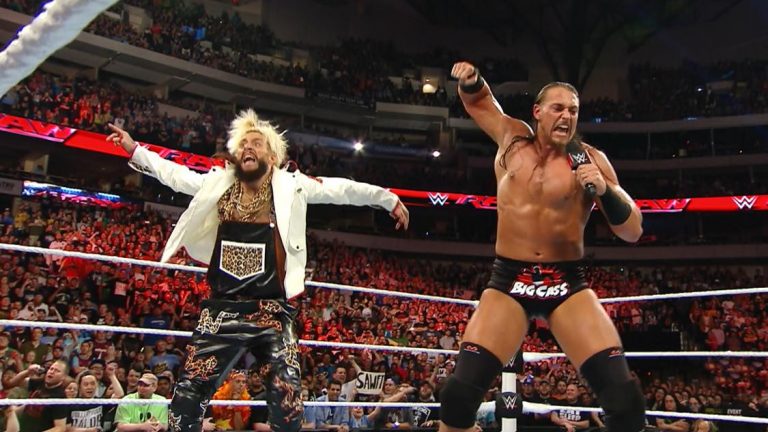 There are a lot of major problems with the WWE as it currently is. The Authority angle is bone-crushingly boring: when Stephanie McMahon has the best stage presence in an angle, you know it’s sodded. In addition to this, the tag team division is nigh on completely fucked with the New Day somehow coming across as popular with the fans as the only entertaining thing on the roster. And the US Championship is also in jeopardy: currently being fought over by Ryback, a man that resembles a two-weeks dead pig hanging from a hook in an abattoir, and Kalisto, also known as Rey Mysterio’s clone now he’s gone to Lucha Underground.

Things are looking bleak for the show of shows, and if we’re all honest with ourselves, it’s too late to save it. However, I’m a firm believer in the power of bouncing back after a poor performance, and as a result I’ve decided to compile a list of the many things the WWE needs to do now that Wrestlemania 32 has ended in boo-filled ignominy.

Let’s start with the bleeding obvious, shall we? Roman Reigns has been pushed by the WWE more than any other superstar in history. His “Roman Empire” has been hyped up more than Wrestlemania 32 itself, and he has been gifted finishing moves that are impossible to botch, whilst simultaneously being given the ability to finish matches with what is, if we are honest here, a laughably crap punch to the face. The bottom line is this. The WWE Universe hates Roman Reigns. He’s been over pushed at the expense of countless numbers of infinitely more talented and more entertaining members of the roster, his in ring presence ruptures cringe muscles on a weekly basis, and his “family” connections with The Rock have been horrifically overplayed.

However, there is certainly a way to use this angle that pleases both the fans and the WWE. Turn Roman heel. It’s a win-win: the fan booing will be justified and Roman can stay on top of the tree, albeit in a Seth Rollins style monster-heel kind of way. The best thing about all of this is when Rollins comes back from injury, he can turn face and rip Roman Reigns a new one, to the delight of us all. Here’s how I would turn Roman heel:

Now that Reigns has won at Wrestlemania and done some vaguely heely stuff on Monday Night Raw, he will then state that the constant booing and failure to get over with the fans has caused him to hate the WWE Universe. Out of nowhere, The Rock comes out and asks Reigns to calm down, playing on the whole “we’re family” angle that WWE has shoved down the fans’ throats. Reigns spears The Rock. Out come The Usos: they meet a similar fate, and Jimmy and Jey go through some tables. Roman turns monster heel, which gives the WWE time to think of a better angle for us to actually enjoy.

2. Revitalise The Tag Team Division and Disband The League of Nations

It doesn’t help proceedings when a wrestling brand does not have enough tag teams. It makes it even worse when those tag teams solely consist of the boring, the throwbacks, and the genetically lucky. Let’s start with the big problem: The Usos. Although their style is decent and their costume distinctive, the fact that they are the spawn of Rikishi and part of the Anoa’i dynasty is hellishly overplayed. The Dudley Boys are past it, Cesaro and Kidd and injured, The Ascension have made no progress in gimmick or style from their NXT days, The Wyatt Family cannot ascend any higher without Creative allowing them to win a match, The Lucha Dragons are burned now Kalisto has received his push. The Golden Truth, Los Matadores, The Social Outcasts. Booooooooring.

Then we move on to The League Of Nations. Never thought I’d see the day when I think fondly of Rusev’s “Hero of The Russian Federation” angle, but here we are. A day where Rusev, Sheamus, Alberto Del Rio and Wade Barrett’s individual skills and angles have all been forfeited for this ill-fated Intersoc at the top of the WWE tag team division. I’m a big fan of a Brogue Kick every now and then, but not following a Royal Bullhammer, a Double Stomp and an Accolade. The team is a mess, and the whole “we have more team members than you” thing was being done better by The New Day. Quite frankly, a tag team needs to have more bonding them together than the fact that they are all not American.

Luckily, the subsequent Raw and Smackdown episodes have revealed that not only the Vaudevillains are entering the fray, but also the superb Enzo and Cass from WWE’s last remaining feather in the cap, NXT. Hopefully they will provide some much needed spice to the tag team division with their flair and, in the case of Enzo Amore, their Rock-esque trash talk. Because you can’t. Teach. That.

This is a hard truth to swallow, and this viewpoint may not entirely be the fault of the wrestlers themselves, but the WWE has filled itself quite excessively with midcard nonsense: sure, a midcard is needed, but not to this degree where three quarters of the roster are midcard. Men that can barely cut a promo, with rubbish move sets and average gimmicks, as well as girls that are barely identifiable. Even though it may be harsh, it is my view that they need to be sacked. Replace them with talent from NXT, or simply cut NXT entirely and introduce some new characters. Whatever happens, the WWE needs to the end the contracts of the following superstars with immediate effect: Adam Rose, Alex Riley, Bo Dallas, Curtis Axel, Los Matadores, The Ascension, Alicia Fox and Naomi. This is by no means a complete list, but it’d be a damned start.

4. Forge Legends, Don’t Rely on Them

It’s sad to admit, but ever since the Undertaker took three F5’s and gave the streak away, watching him in ring has been hard. He is visibly weightier than he was, his botches are more frequent and his demeanour less threatening. The same can be said for other legends – whilst the Rock can still cut a promo, he is overused and whilst Shane can still make a crowd pop, his greying hair indicates he is the symbol of a bygone era. So why does the WWE keep relying on this aging talent? Legends need to be made and the next generation of wrestling heroes secured – the wrestlers cannot be allowed to age with the fanbase. As a result, the doctor’s orders are these. Keep Shane in the boardroom, keep The Rock on ice for a couple of years, and have The Undertaker roll over to the brightest talent around.

(but please not Roman Reigns)