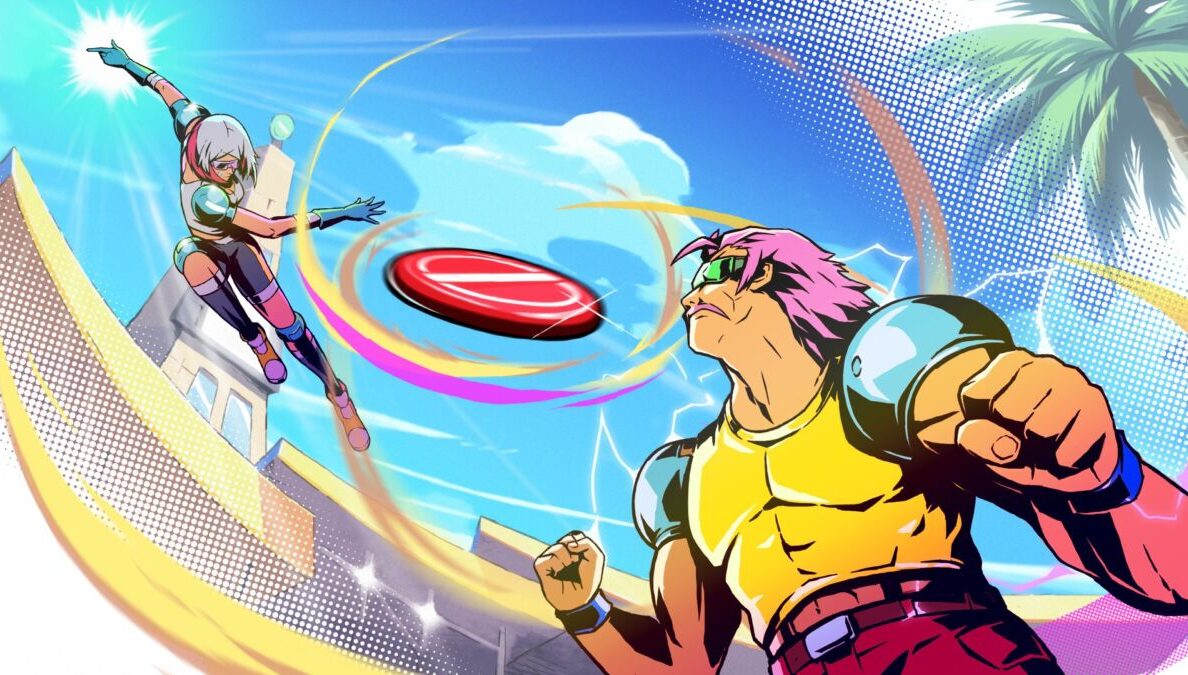 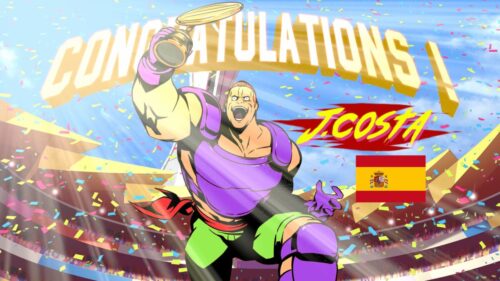 1994’s Windjammers was certainly a unique game when it was released on the Neo Geo arcade system, which allowed players to bring arcade-quality games into the home. It was most certainly a Neo Geo game through and through. With slick animations and large chucky cartoon visuals, it was a gorgeous looking game, but what made it unique was its gameplay.

Windjammers is a 1v1 frisbee sports game unlike any other, playing like a mix of volleyball, tennis and classic video game Pong. Windjammers was largely forgotten until the bankruptcy of developer Data East, which led to the IP changing hands and new owners DotEmu releasing the arcade classic on the Switch, PS4 and Vita a few years ago. It was a hit with critics upon its re-release, spawned its own unique competitive esports scene and, of course, has led to a sequel being released a whopping 18 years after the original.

For Windjammers 2, Dotemu have kept the chunky cartoon style characters of the Neo Geo intact, but they’ve had a modern redesign and look less pixelated and much more like something from a Saturday morning cartoon series from the 90s. Windjammers has always had an upbeat synthwave-esque soundtrack and this sequel is no exception, with its exciting, bright and breezy tracks.

Windjammers 2’s key selling point is how easy it is to pick up and play. Even inexperienced players, either through local or online play, can easily pick up a controller, get to grips with the basic gameplay and have fun immediately. You can adjust the rules, from how many points it takes to win a round, to how many rounds it takes to win a match. While you should 100% recommend checking out the brief tutorial before jumping in, anyone who wants to have a quick bash on Windjammers 2 can do so without having to spend hours mastering the controls.

Windjammers 2 is a nippy game in both gameplay and progression. Standard rules see you attempting to score 15 points to win a round, and different amounts of points are given depending on where your frisbee lands in the arena. A standard match consists of a best of 3 rounds, and even inexperienced players can rack up 15 fairly easily, meaning that matches can be swift affairs. Luckily, though it doesn’t take long to find your next arena and start all over again. Windjammer 2 doesn’t give you time to get bored thanks to some swift load times and easy matchmaking.

It’s hard not to say how fun multiplayer is in Windjammers 2. The matches are fast and intense, but it doesn’t really matter if you’re an expert jammer or a total amateur — when those discs start flying it’s just really, really fun. Matches are intense and the whole flow of the match can change in an instant; it only takes a few missed discs to go from winning to losing. It’s competitive frisbee: it’s a bit silly, but ultimately great fun.

While it is easy to play, Windjammers 2 is also a game that demands to be mastered. Multiple times during my first experiences with the game, I found myself asking ‘how on Earth did I do that?’. Though there is a very basic tutorial, the game doesn’t do a great job of explaining its intricacies.

As much as Windjammers 2 is easy to pick up and play, mastering the game is actually fairly challenging, and while that can be a rewarding achievement, it can also be a little frustrating. Windjammers 2 does have a how to play section which gives you the heads up on how to play the absolute basics, but there’s a lot of intricacies that can be tricky to master. For instance, some special moves don’t seem blockable, yet sometimes they are. It’s a little confusing and takes a lot of getting used to. It also doesn’t help that this “tutorial” is just a series of images.

Windjammers 2 is very easy to play, but working out how to deal with special moves and exactly when to hit yours means that the game starts easy, but can get difficult quite quickly. Windjammers 2 requires you to experiment and, most importantly, practice to get the most out of it. While it can occasionally be frustrating, when you actually learn how to get most out of Windjammers 2 it becomes a deeper experience than you first might think.

Online, couch versus and offline play are all available, but there’s no variety in terms of game modes, and single player is very much like a 90s 1 on 1 fighting game, in which you just play a series of bouts until you finish the game. DotEmu is all too aware that the allure of Windjammers 2 is the fast, competitive online play, and it’s understandable that they’ve chosen to sacrifice more complicated game modes for a more esport style game.

Windjammers 2 is a beautiful, fast-paced game with a steep learning curve. It can indeed be occasionally frustrating, but Windjammers 2 is at its best when you’ve put time into it and learned exactly how to tame its trickier systems. Easy to pick up yet hard to master, it’s a game that is best played with others, and when doing so it can be quite the experience. 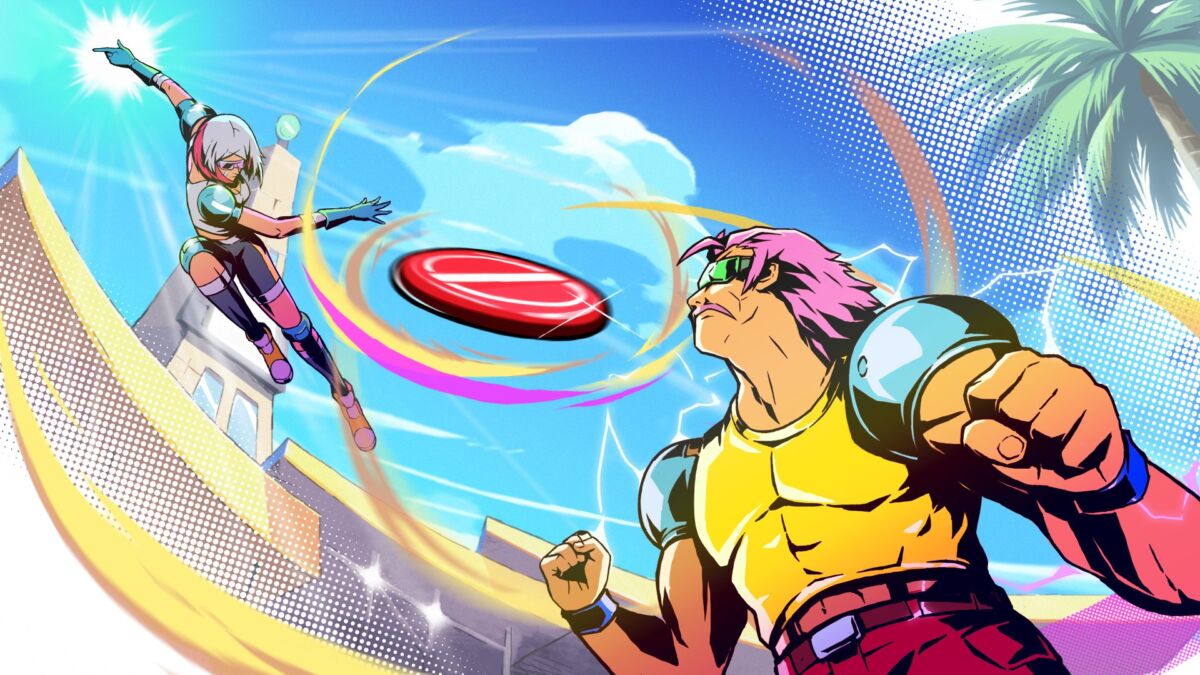 Verdict
While there may not be much content on show, Windjammers 2 totally makes up for it with intense and unique gameplay that will have you asking "just one more match?".
8
Cultured Vultures is a pop culture website established in 2013 covering all things gaming, movies, and more. We eat your words.
All The News On The Biggest Games