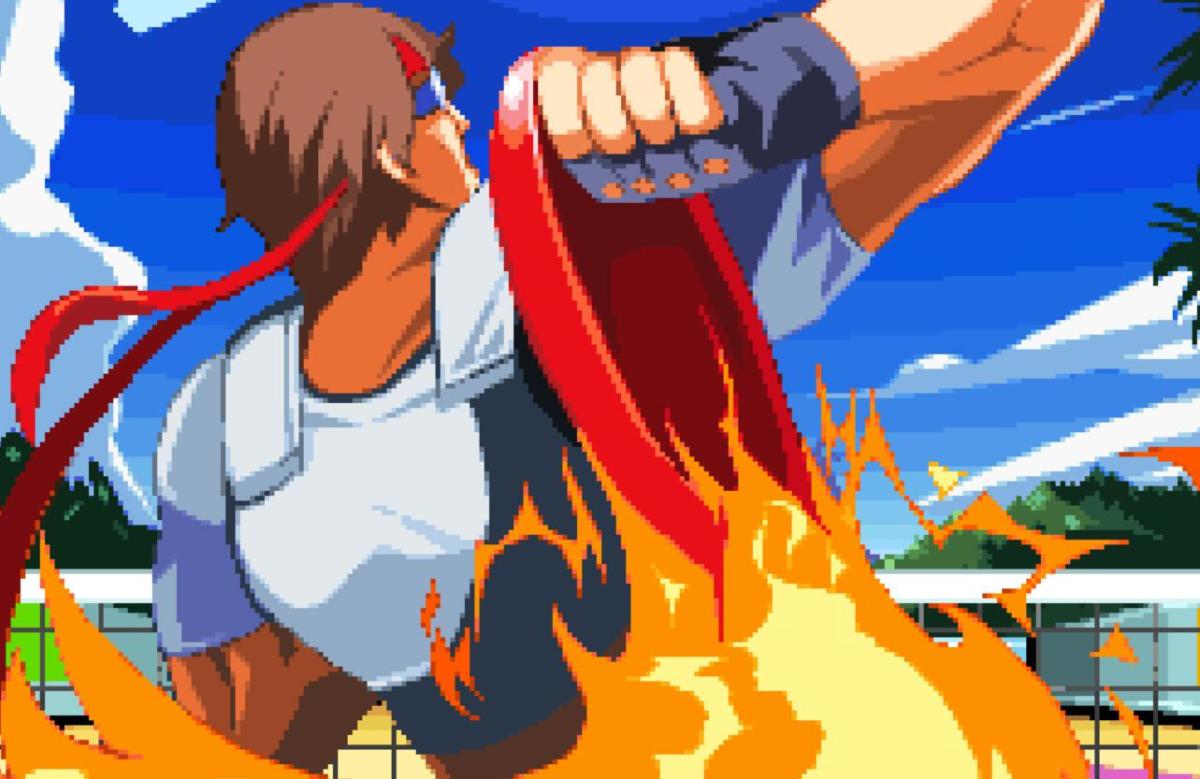 Gaming in the 21st century is largely devoid of genuine surprise. With the internet producing pages upon pages of news over even the smallest of titles, and many games having dozens of hours of (sometimes modified) gameplay in the public domain months or years before release, it can be difficult to just ‘chance’ upon a good title at random. I admit that even I read up on a game before purchase- after all, who wants to waste their money.

Back in my youth, there was no way to find out about a particular game, aside from seeing a few minute of footage on a TV show, or perhaps an article in a gaming magazine, and sometimes you ended up buying a duff game. However, when you went into a shop, saw a game at random, liked the look of it and bought it on a whim, that is when the best surprises happen, and that is why some painfully average games still remain my favourites today. 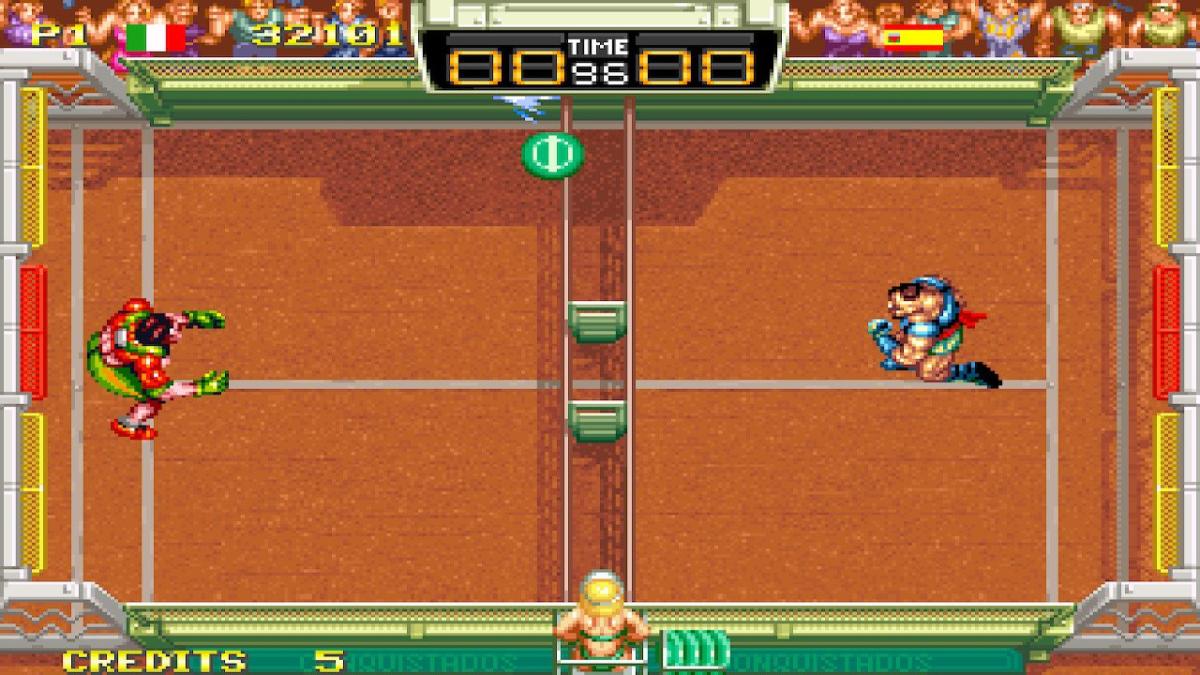 I had never heard of Windjammers before. A quick Google search brought up retro screenshots, and I assumed that this game was a modern title made to look old school. How wrong I was. Within seconds of firing the game up, everything felt remarkably familiar, the sounds, the chunky sprites — this looked like it could be a Neo Geo title. The Neo Geo was a console I desperately wanted to own in my childhood, but its rarity tied with insane price tag of both console and games (games could cost as much as $300) meant that I never would be able to experience these titles.

My knowledge of this mystical console came from GamesMaster, for the most part. Its magazine featured screenshots on occasion and, if I recall correctly, a few games featured on the television show. Neo Geo titles look amazing, the arcade quality blew the socks off anything the SNES or Mega Drive could produce. Large sprites were the signature style and they featured in multiple titles from Samurai Showdown to Metal Slug to Neo Turf Masters and beyond. 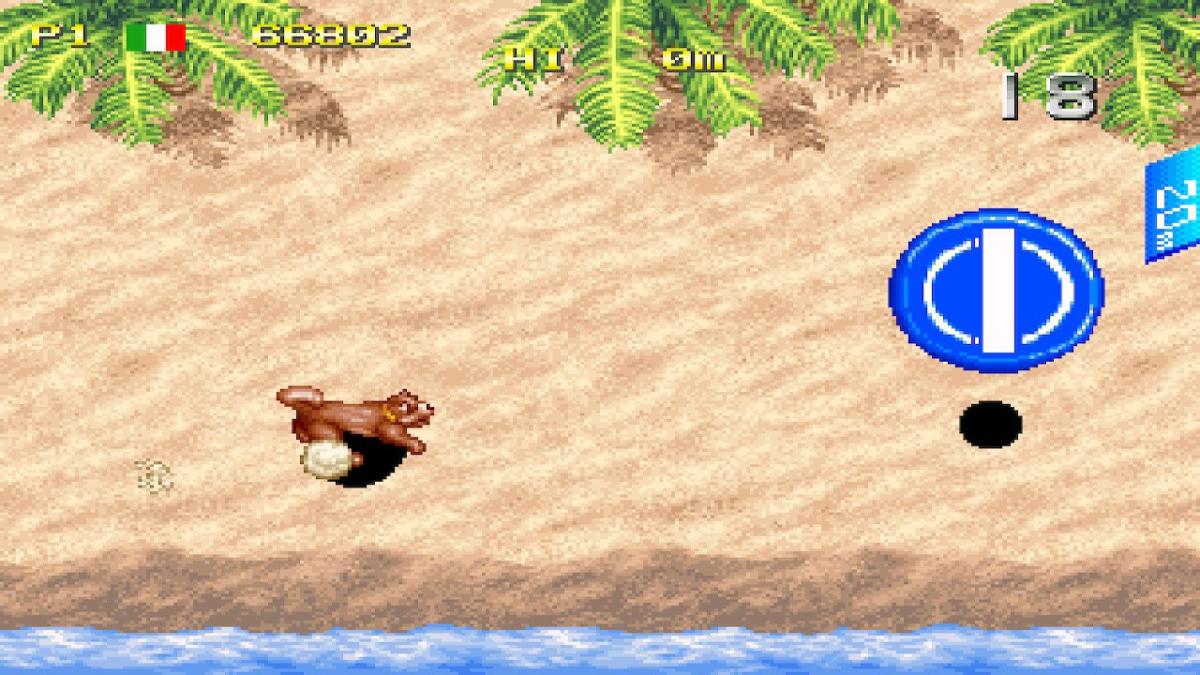 When the game loaded up with these chunky bright graphics and unmistakable Neo Geo-esque music, I knew this had to be a port. Plus, it says so in the options. The name Windjammers doesn’t really give much away, and before you ask, no this isn’t about going on a family seaside holiday in the 90s. In Japan, this game is called Flying Power Disc, which is much closer to the content of the title.

Windjammers is what would happen if Pong and Tron’s Disc Battle had a baby. In short, Windjammers is a top down frisbee game, with a little bit of air hockey thrown in. The gameplay is fairly simple, and the aim of the game is to strike your opponent’s goal zone with your disc. Different points are allocated to different areas of the goal, some areas offering more points, but are harder to score. To win, a player has to score 12 points to win a set, and each match is split into 3 sets. 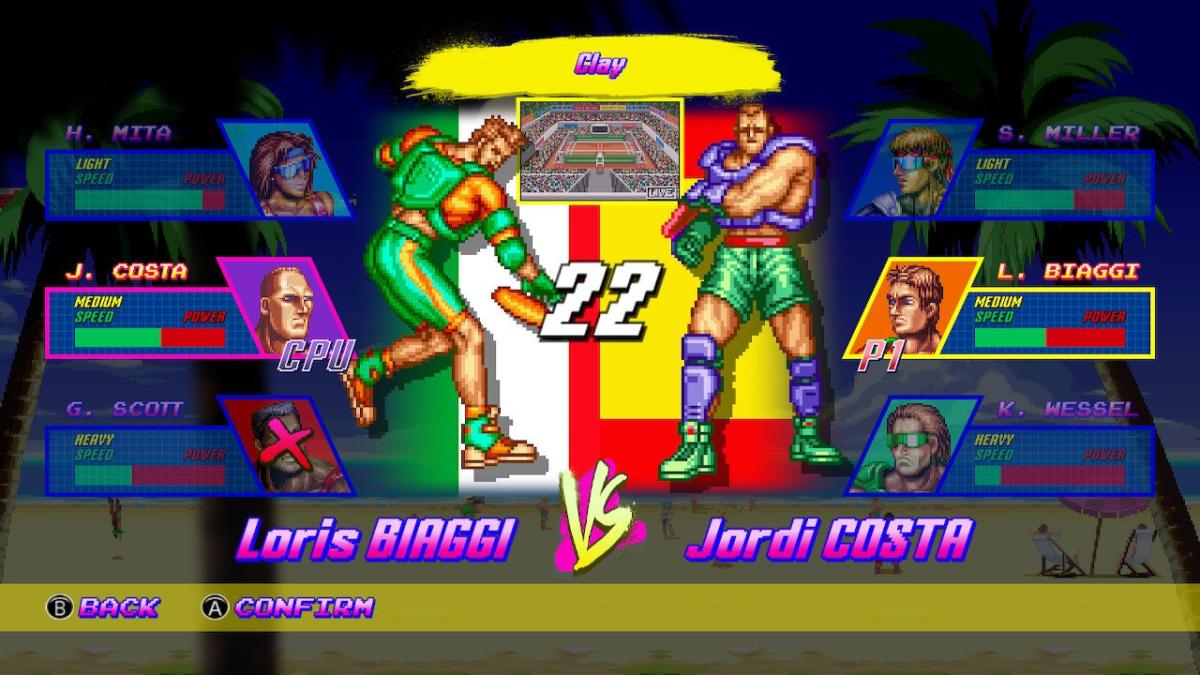 There are two elements: defence and attack. When on the attack, you throw your disc at various angles to catch out your opponent, expect them to do likewise. When on the defence, you need to pre-empt where your opponent will throw their disc, and will see you diving around the arena to protect your goal from your opponents strikes. There are six characters to choose from, with different stats and special moves.

As for gameplay, that’s about it. Where Windjammers really comes into its own is in the multiplayer. This 1v1 title feels very much like a fighting game, and when battling someone else sat next to you, the game becomes incredibly tense. Playing against another human, especially when they’re right there with you, is such an intense local multiplayer experience, one which you don’t get as much as you used to. This title also has online multiplayer, which I didn’t test, but I can imagine is going to be the best way to experience Windjammers. 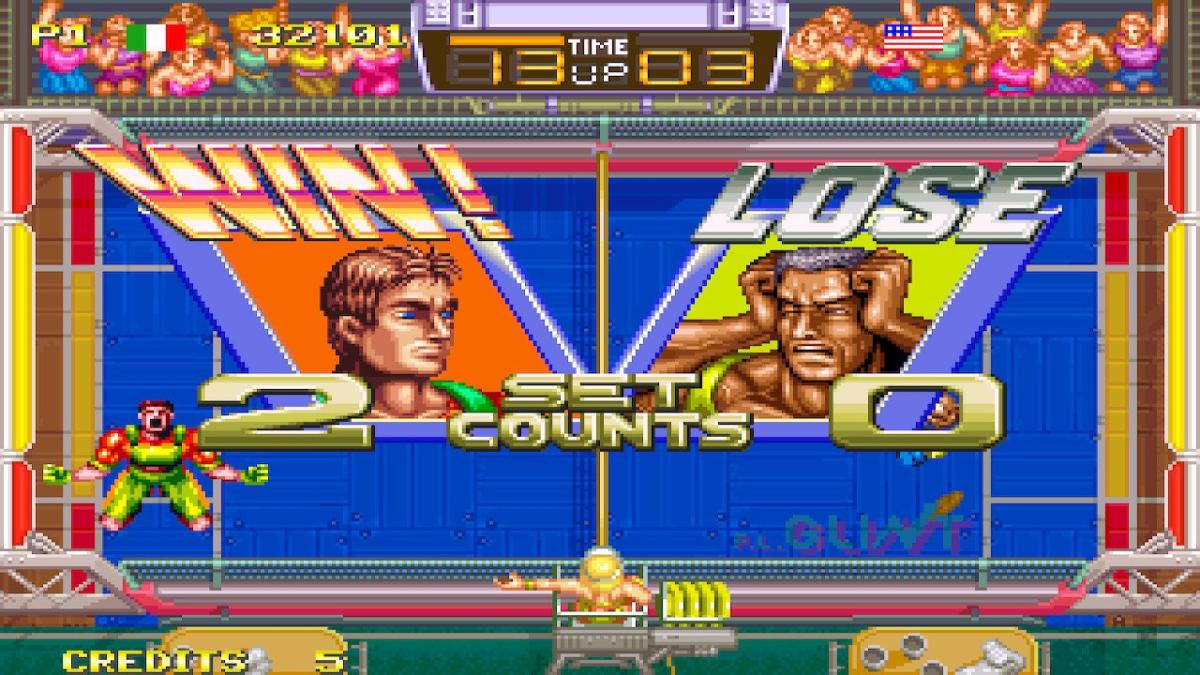 Windjammers also has a couple of mini-games to break up the parade of matches. There’s a fairly standard bowling game, but naturally, bowling with flying discs instead of balls. It’s good but a little limited. There’s also a game which sees you throwing a frisbee for a dog, once thrown, you now control the dog and have to catch said frisbee, while running down the beach and attempting to avoid any obstacles. They mini-games are nice distractions that help to break up the gameplay, but feel a little empty.

The Neo Geo was a strange little console sandwiched between the 16 bit and 32 bit eras. The console itself is often described as being 24 bit, although that is not really true. It is more powerful that its 16-bit competitors which is why the graphics are so nice, but it also means the Neo Geo games have a very particular sound, with voice clips and 90s arcade style music that really give the game a ‘blast from the past’ feel. A nice little touch is that you can choose to use the enhanced music from the Neo Geo CD version of the game.

Windjammers runs pretty similarly whether playing while docked or not. There’s no noticeable slowdown or loss of quality, but given the game’s age, that’s to be expected. There’s options to change the ratio from the original 4/3 or the Switch’s natural 16/9. I preferred the latter, which allowed me to play full screen. Windjammers feels rather at home on the Switch, an engrossing competitive title which you can dip in and out of on long journeys, but also the option of wireless play means that multiplayer gaming is never far away.

The recent swathe of Neo-Geo titles on consoles has allowed a new generation of gamers to enjoy the classics, and allowed an older generation of gamers to play the games they never could back in the day. Windjammers though, is a totally unique, lost gem of a video game, even amongst its Neo Geo brethren. It’s so incredibly simple, like the early days of gaming, but so enthralling that it makes you want to play ‘just one more match’. Anyone playing this game in single player might run out of steam, however — Windjammers is at its best when playing against others.

Verdict
Windjammers is a totally unique and simple but enthralling game about competitive frisbee that feels right at home on the Switch. Microtransactions: none
8 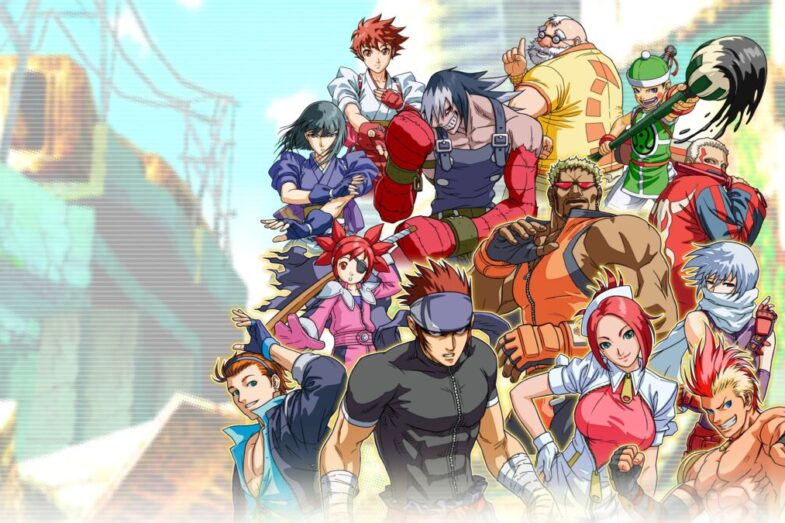