It do be hitting different doe. 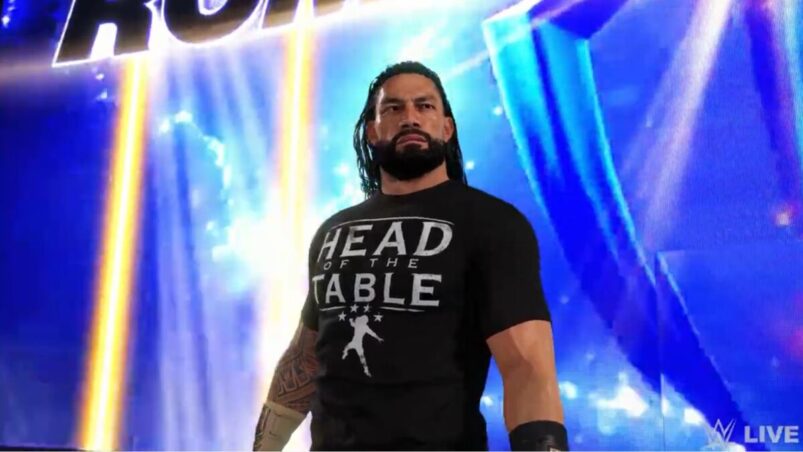 Ahead of more comprehensive reveals in the New Year, 2K and Visual Concepts have shared another glimpse at WWE 2K22 for expectant fans, and it definitely looks like a huge improvement on WWE 2K20 already.

Though, to be fair, that wouldn’t be too hard.

Taking the form of the “Top-10 Hit List” of what to expect from next year’s game, the new teaser gives a glimpse at some seriously upgraded visuals as well as a whole host of new content and modes to look forward to.

Goldberg looks brilliantly angry, Roman Reigns comes across like a man who’s about to turn his whole career around, and the Creation Suite offers higher fidelity with 10000 customisable components to play around with. The only slightly unconvincing character model is the big sword lad Drew McIntyre, whose beard and eyebrows are maybe just a tad too thick. It’s still an upgrade on 2K20, though it does seem to be harder than people realise to convincingly animate long black hair and a beard. See also: Seth Rollins.

In terms of actual gameplay, the teaser is scant, but it’s clear a lot of work has gone into the in-ring animations from what little footage that’s available. The game engine has been “remade from the ground up,” 2K and Visual Concepts confirmed to us, with 35000 moves in total (5000 of them new) and all strikes being totally recaptured and retimed. All-new commentary is also on the way, which might honestly be the most refreshing thing about 2K22 — the “choose your own adventure” style of random voice lines being cut together was starting to get very long in the tooth.

Not only will the game look better, but Visual Concepts are making sure it feels good to play too with an all-new control scheme that will appeal to newcomers while still providing the depth that long-term fans expect.

Then there’s all the modes that will be coming to the game, including some returning favourites. The long awaited GM Mode has been reborn as MyGM, your stable will rise to the top in MyFaction, and MyCareer is also getting an overhaul in the form of MyRise. It also seems like Rey Mysterio will getting his time in the spotlight in Showcase this year.

Here’s a look at everything covered in the newest teaser trailer.

For as good as WWE 2K22 looks, this tease is ultimately just that — there isn’t quite enough to allow yourself to get blown away by the game yet, or to even really fully get invested after the disaster of the last game. However, for at least actually showing the game long before launch, something that never really happened with 2K20 (for obvious reasons), and listening to fans who were eager to see more, WWE 2K22 is making all the right moves.