Paul Heyman has all the goss' on 2KBG 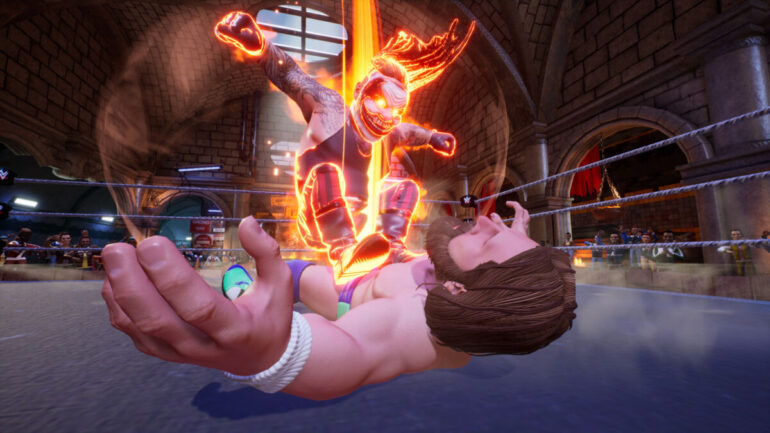 WWE’s resident advocate Paul Heyman took to social media today to announce the new game modes for WWE 2K Battlegrounds. With the game putting a heavy focus on the arcadey fun that has been sorely lacking from 2K’s annual wrestling sims, there’s no surprise that the game modes reflect that by going back to basics with a creation suite that makes your pet projects look like they’ve been taken straight out of a comic book.

2K have created their own fantasy world of wrestling where Paul Heyman pitches a new promotion that takes the action out of the squared circle and into some pretty ridiculous places. It’s down to you, his newest client, to rise to the top of food chain by hurling the best and brightest of WWE’s past and present into the mouth of a hungry alligator.

Already, this single player campaign mode is seeming like a lot more exciting than WWE 2K20‘s MyCareer mode, which was a bit of a mess if you managed to make it past the first chapter. I appreciate that a wrestling game tried its hand at being an RPG, mixing in an ‘investing’ storyline and character-based choices with the eccentric dramas of WWE programming. Overall, it fell flat with the majority of reviews panning it for shoddy writing and awful voice acting. Saying all that, we did get to see Samoa Joe with a bionic arm, which sells itself really.

So now we have a simplistic narrative of newbie wrestler, who happens to also be an android pirate, going head-to-head with legends and superstars in a battle for supremacy. This will at least be putting the focus on the gameplay, which is ultimately the strength of any sports/fighting game.

Next up was the Battleground Challenge Mode, where your created superstar will have to complete a total of 100 objectives to score new outfits, moves and new playable characters for you to take into the ring, or castle. This new mode will allow players to build their in-game currency to spend on whatever they please, something that 2K have tried to implement in previous games with the 2K Towers mode, but never really made it as big of a deal as they initially wanted. This seems much more akin to the challenge modes found in fighting games like Street Fighter, Mortal Kombat and Marvel vs. Capcom, so if you’re a glutton for punishment and the arduous process of learning all the mechanics, then this will be right up your street.

Heyman unveiled a handful of the match types that will be readily available in the base game. Most of your standard array of exhibitions have made it in, including: One v Ones, Tornado Tags and Triple Threats, but what’s most interesting is the King of the Battleground match type. This is essentially a giant battle royal, similar to the classic Slobber Knocker matches found in classic titles Shut Your Mouth and Here Comes The Pain. Your chosen wrestler will compete in an ongoing battle against the entire Battlegrounds roster, whoever is left standing at the end becomes the true King.

I used to love playing Slobber Knocker matches, and the idea of multiple online players getting to compete in this match is enough to get me excited. This is the sort of shenanigans that wrestling gamers have been waiting for, a match type that makes for fun, competitive play. Even though WWE 2K20 allows for gamers to customise matches and access a wide variety of different stipulations and match types, but none ever really felt unique or ‘fun’, judging by what Mr. Heyman showed us today, we imagine 2K are going to rectify that with the chaos that will ensue in multi-person matches.

So it seems that we’ve got a hell of a lot to look forward to when 2K Battlegrounds drops in September. With 70 of WWE’s expanded roster already confirmed for the game’s line-up, and a promise of DLC in the future, this will certainly make up for the disappointment that was WWE 2K20, a game that is well and truly dead in the eyes of the fanbase.

Will you be pre-ordering WWE 2K Battlegrounds? Which game mode or match type will you be first diving into? Let us know in the comments below.