WWE 2K20 (PS4) REVIEW – A Disastrous Changing of the Guard

They botched this one, gang. 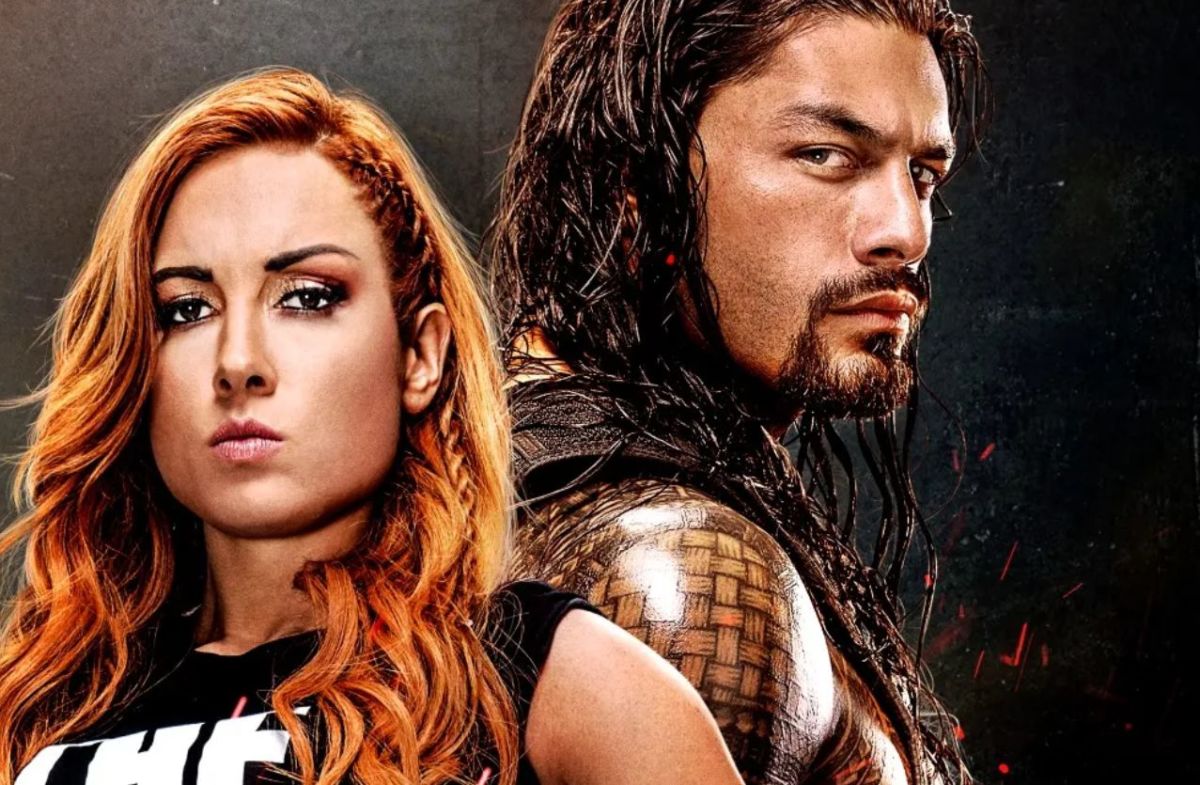 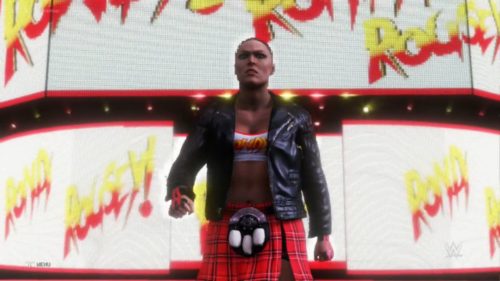 Another yearly installment and a nice round number with WWE 2K20 this year, but not everything is as expected. Whereas WWE 2K19 was a game that took everything the developers had learned from the previous years and improved on the inner workings, this new edition feels like a monkey wrench in the gears.

Yes, I too agree that they should take a year off and fix some of the more nagging issues with the series, but I have a suspicion that WWE demands that annual release and its revenue over anything resembling long-lasting quality. I think everyone knows the usual suspect issues before a new entry is even announced. So, once again I argue that there are too many loading screens, that arenas are boring and aren’t as interactive, and the superstar rankings are still all over the place and a bit ridiculous. However, this year managed to upgrade some of the classic issues and add a few that 2K19 seemed to have taken care of. 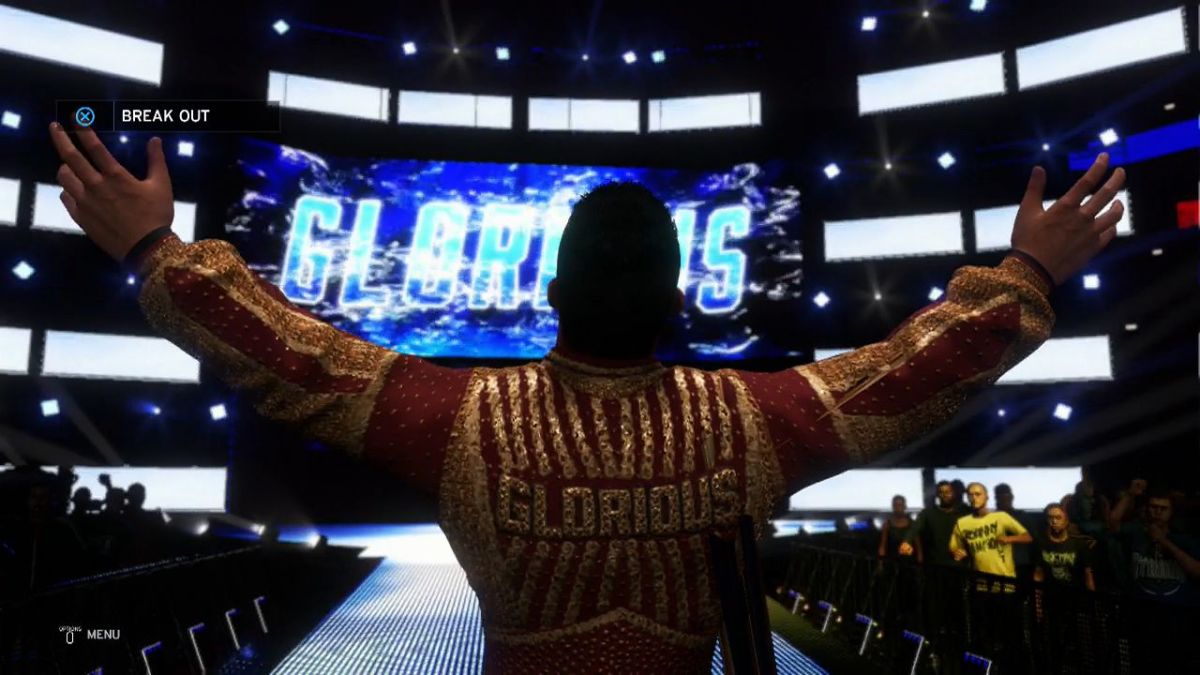 The visuals often go from looking absolutely stunning to incredibly hideous with an odd balance for in-engine gameplay. I am frequently amazed at what the developers can do to make these entrances for certain superstars look so good, how authentic some of the moves look when hit right. Then, there is that flip side of the coin where things look like garbage. This is especially true in the story modes or anything involving custom characters, where the models look copy and pasted and their accessories are painted on with bad layering.

Some elements look even worse this time around though, like hair and certain character portraits or profiles that don’t match the superstar at all. The rise and fall in quality can make me queasy at times and I found myself wondering if I had identified the correct wrestler. I’m not even talking about the fact that the mouths are frightening at times and don’t move right with the dialogue, or that everyone who came in my stream first asked, “what’s wrong with that character’s face?” 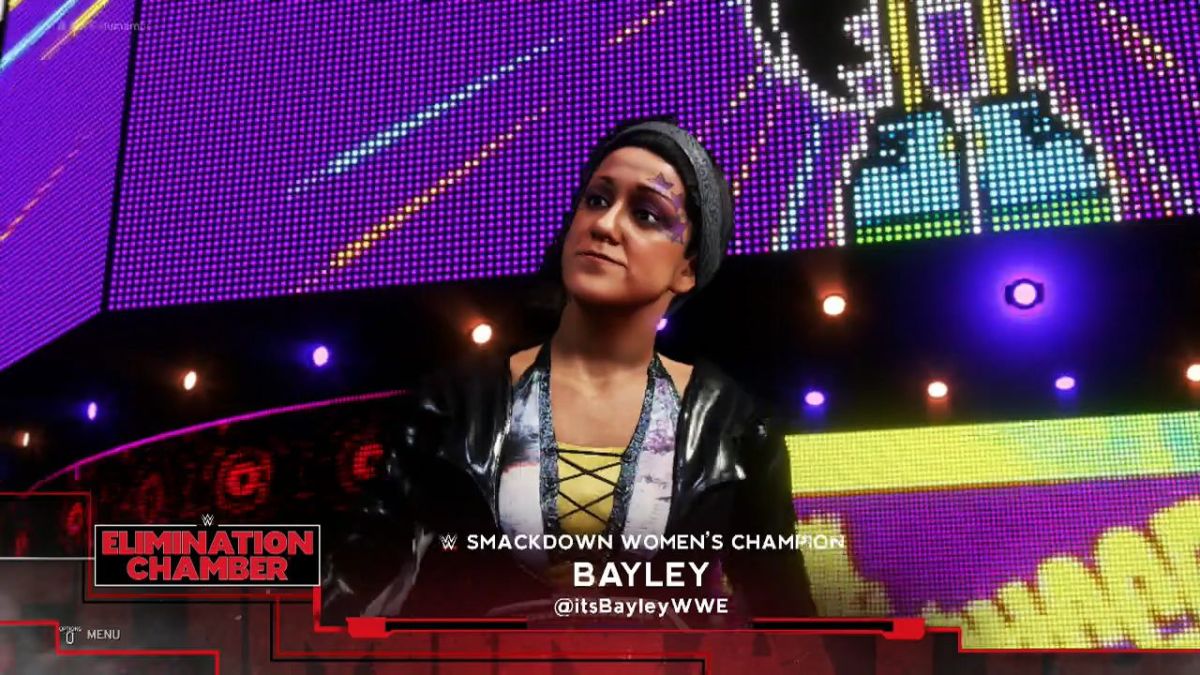 It is hard to draw the line between what is a visual issue, some failing of the game engine, or simply a glitch. There are parts where things just disappear, the text doesn’t pop up, items vanish, and sometimes entire characters blip out for a moment. Those would be considered the simple ones, though. The glitches players are experiencing are getting wild and looking through the various posts is mesmerizing. Most of my experiences involve the ropes and hair breaking physics, but at any point where there are matches with more than four people and several items involved, it always looks like the game is simply shaking apart at high speeds. Somehow, the game only crashed on me twice. I’ve read of others having much worse luck.

They’re all pretty humorous and have almost become a thing we look forward to seeing how crazy they can be every year, but eventually, the realization sets back in that this is a sixty dollar or more experience that will only get patched to a certain extent. I wonder what the threshold of glitches is, where people stop buying the game at release because of how ridiculous the engine and coding imperfections get. The game received a day one patch to help with some of these issues but after playing, I’m not sure how anyone could tell. If this is the state of WWE 2K20 after a patch, I dread to think what it was like before. 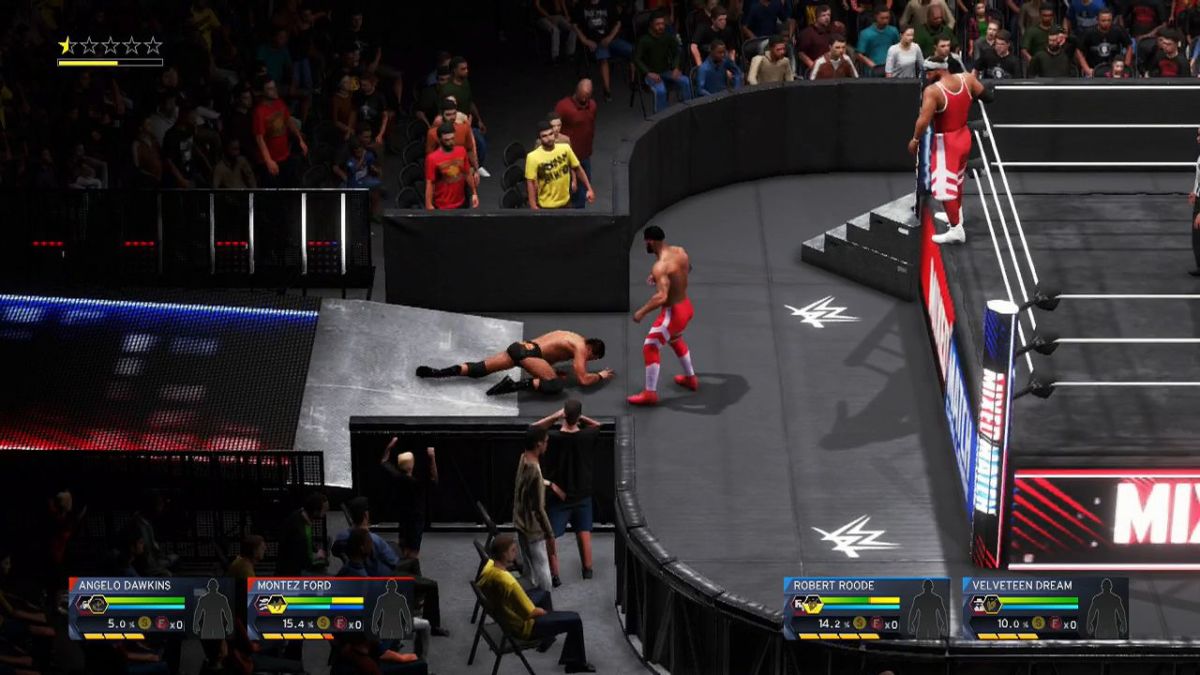 There are some issues with sound as well, like having the crowd audio or all of it just stop and come back randomly. Sound effects are good, but they don’t always trigger when they should. Not really issues, but as per usual, some of the voice acting isn’t bad and then there is a lot of it that just feels so canned and stale. The commentary doesn’t stick out as being awful, just disjointed like most iterations, but it almost seems like they are repeating lines even more than usual. It’s very annoying during the story mode when they have even less to say about the player-created characters.

Custom creations are fun as usual. No matter how goofy these things look when I’m done, I have a good time going through all of the items and just creating something unique, even if some of the layers can be annoying to line up. The ability to create my own finisher is absent and custom championships aren’t going to be added until later (so they say). Combining this with some recycled items and a lack of new match types can make some areas feel a little sparse. I was personally bummed that there wasn’t more to change when making a custom arena, leaving that mode with so much wasted potential. 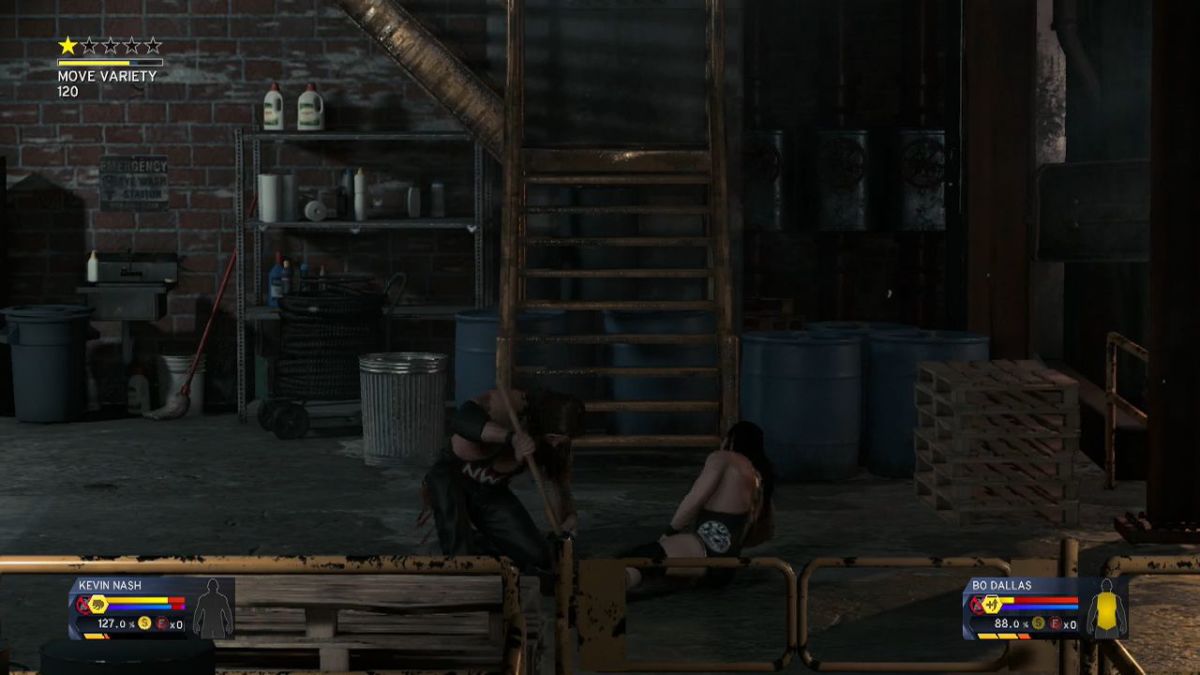 Controls have been altered this year as well with some abrupt button switching. This change is said to be for offering a more streamlined approach to new players. I’m not sure how easy it honestly is, seeing as signatures and finishers now require multiple buttons (especially for alternate big moves) and reversals have moved to the top face button, but the symbols for these moves do appear when appropriate. Well, they appear most of the time, certainly not always.

The new layout felt odd at first, but it didn’t take too long to re-acclimate, though I can’t imagine how it would be for someone who hasn’t played the series in years. I wonder why, of all games, this series won’t let players completely remap their buttons for ease and accessibility. The reversals do almost feel more responsive at first, but then the game can still screw players on some easy blocks. Successful reversal sequences feel great when they connect smoothly, but it isn’t the norm often enough. 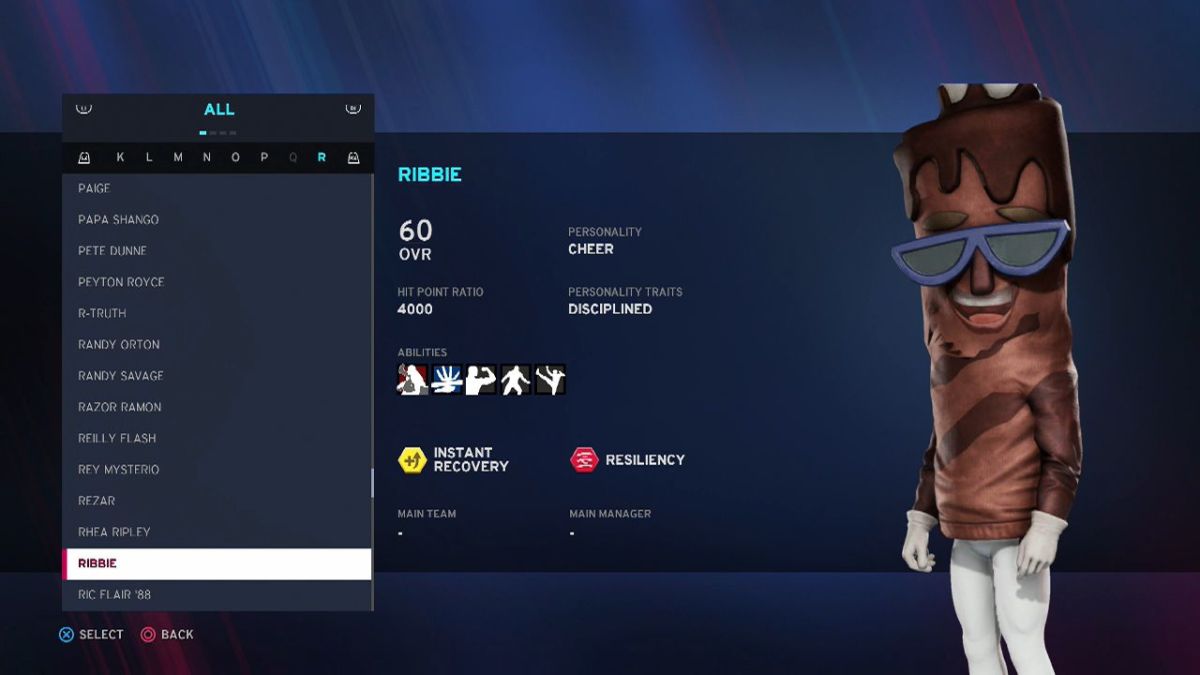 One thing that will seemingly never be good in a wrestling game is the targeting. I know it’s bad every year, causing hits not to connect or to look weak, especially when the target is down on the ground, but the AI in 2K20 will often choose the worst person to have the player look at or just jump in a random direction on aerial assaults. Sometimes moves just miss completely for no reason, even when they look lined up perfectly.

The worst part is when trying to use weapons. The new wheels used to select tools of destruction are cool, but it is so hard to connect with them at times. I understand there being more trouble during multi-man matches, but why am I having difficulty hitting a downed opponent with a baseball bat at my feet? He’s right there. The whole flow is just off and collision somehow seems worse this time.

A lot of these bad aspects and the backsliding from last year seems to mostly stem from the switch in developers. Yuke’s were practically synonymous with the WWE games, but that is no more. Visual Concepts — who had been working alongside Yuke’s on the games for the past five or so years — has taken the reins, seemingly wanting to give more to the fans. Visual Concepts had to re-code a good chunk of the game to make it theirs, and build a system they can better work with in the future. This was all apparently done in a short time and it is hard to think that this restraint was not a big factor in why WWE 2K20 is in its current state. This is a fact that is beginning to make the rounds and may be ‘advertised’ some more as an attempt to comfort those who were upset with the finished product.

All of this isn’t to say there aren’t good parts here. The ladies have been given a big push this year with the Four Horsewomen in the showcase and intergender matches. The new MyCareer story mode also has the player controlling a male and female created wrestler. I was worried I’d have to choose which to play, but their crazy story is intertwined and longer than last year’s. WWE 2K19 had a good story mode but it was very typical and somewhat grounded, but not this time. There are some neat references for those who played through last year’s adventure. My one real complaint about that — other than how bad some of the cutscenes look — is that there is almost too much to check and micromanage between matches that kills the flow. There is a severe lack of indicators when switching characters and the added load times are off-putting. 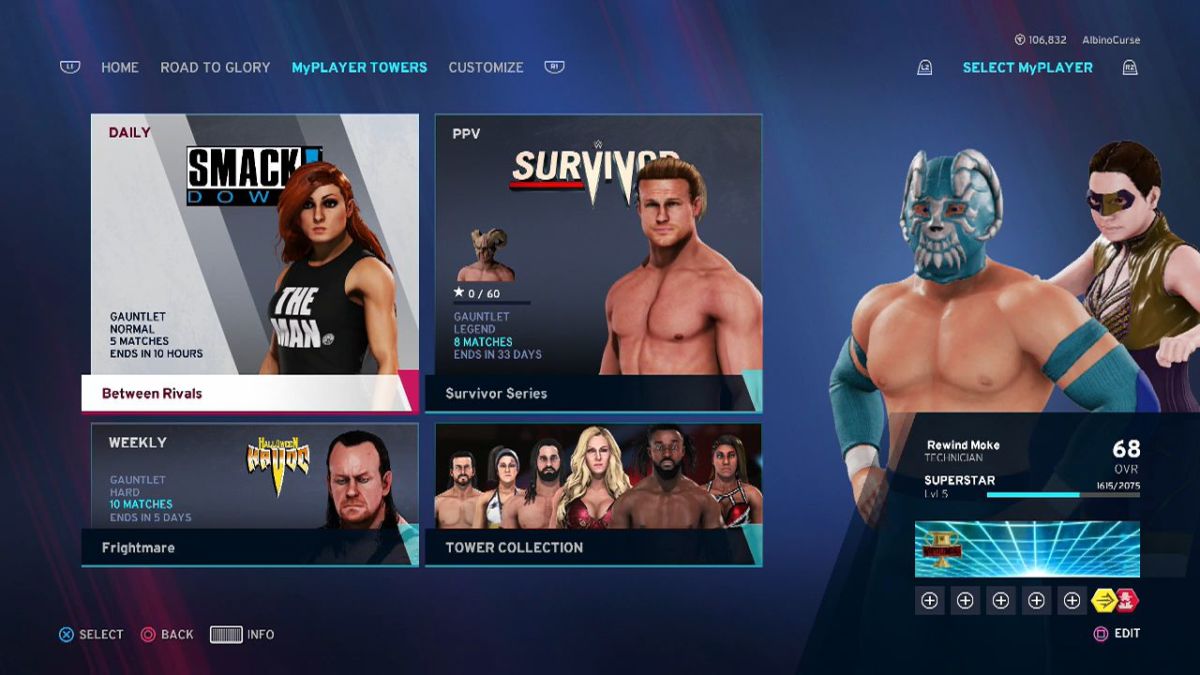 That said, I had a blast going through the story mode. Maybe that was because I streamed a huge chunk of it on Twitch and the peanut gallery was killing it, but I also enjoyed the random matches I got in. The game can be fun for sure — to me at least, I understand why some disagree — despite the issues. Visual Concepts made some attempts to improve the experience, like putting weapons back in matches like Hell in a Cell and tweaking Universe mode to trim some of the fat and help the pacing for players who want to run their own federation.

The more ambitious thing, I suppose, the part that Visual Concepts see as their baby, would be WWE Originals. This mode seems like a great creative outlet and will appeal to those who don’t mind stepping out of the real and into the fantastical. There will be four pieces of DLC for it apparently, with the first one focusing on The Fiend and some spooky themes. The developers felt that there was room to simulate the Raw and SmackDown experiences and have some fun as well. It all looks enticing, but seems like extended versions of the returning towers from what I saw. That content is not available as of this writing, but comes out 10/28 and can be purchased collectively for $29.99.

For that and a few of the other aforementioned reasons, I was hesitant to give WWE 2K20 a definitive score, but with all of the issues, I want to drive the point home that this needed more work before release. Indicative of the time we live in, this game will need more fixes and tweaking in the near future if the developers have the time or want to care about their fans. The #FixWWE2K20 hashtag is still going strong as I wrap this up, so people are paying attention and I’m interested to see how Visual Concepts will respond, being their first time in the driver’s seat. It’s a disjointed and unpolished experience that I can have a lot of fun with, but I may not uninstall WWE 2K19 just yet in case 2K20 stays like this.

A PS4 Deluxe Edition of the game was provided by 2K PR for the purposes of this review.

Verdict
The series is back up to its old tricks, the bad ones, as this new installment hosts a crazy number of glitches and annoyances. Some fun can be had playing with WWE’s toys, but the cost of entry seems steeper than ever this year.
5