DC's five flagship TV shows are all coming together - what's all that about, then? 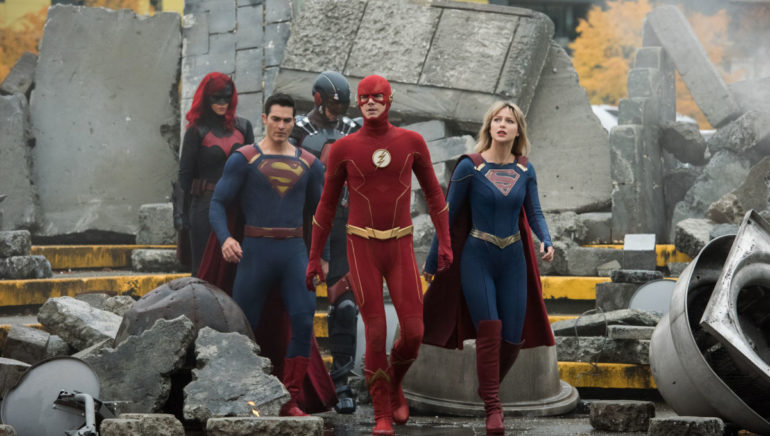 As crossover events go, there’s none bigger than the Crisis On Infinite Earths – but then again, the Arrowverse has always liked to up the ante when its shows collide. What started as a team-up between Green Arrow and The Flash, with separate storylines for each episode, has turned into something bigger each year since.

The next crossover saw The Flash and Arrow together as the episode focused on laying the ground for Legends of Tomorrow which premiered the following month. When Supergirl was on CBS during its first season before going to the CW for the second, they had a crossover with The Flash as Barry Allen found himself stuck in her earth. Since The Flash establishes the concept of the multiverse, the explanation of infinite universe that have their own Earth, the crossover made sense. The following year led to the Invasion! storyline which had three shows (the episode of Supergirl didn’t tie-in except for the ending) crossing over.

Then perhaps their biggest crossover so far happened with Crisis on Earth X, which had all four shows crossing over. And last year, they had the Elseworlds crossover which set up Batwoman and this year’s crossover, Crisis on Infinite Earths. Everything has been leading up to this highly-anticipated crossover as it’ll feature all five Arrowverse shows interweaving over the next two months, with epic battles and tributes to DC Comics at large.

The excitement has built up so much that people who haven’t been keeping up with the shows are interested. They even announced it during last year’s crossover, Elseworlds, to build up hype. Since there are over 450 episodes across all five shows (Arrow, The Flash, Legends of Tomorrow, Supergirl, and Batwoman) in the Arrowverse, you probably won’t have enough time to binge them all for the event. So here at Cultured Vultures, we’re giving you the essential information to get you ready for Crisis on Infinite Earths.

What’s the Crossover About?

Crisis on Infinite Earths centers on the Harbinger gathering Supergirl, The Flash, Green Arrow, Batwoman, White Canary, The Atom, and Superman together to fight against the Anti-Monitor. They’ll have to recruit heroes from other earths as entire worlds are being destroyed. It’s a battle to save the multiverse – worlds will live, worlds will die, and the Arrowverse will never be the same again.

Crisis on Infinite Earths will start on Sunday, Dec. 8, with an episode of Supergirl. It’ll continue on Monday with Batwoman and Tuesday will be The Flash. The crossover will take a month-long break as it wraps up on Jan. 14 with back to back episodes of Arrow and Legends of Tomorrow.

What Comics Inspired The Crossover?

The crossover is based on the 80s limited series Crisis on Infinite Earths by Marv Wolfman (listed as a cowriter for the Arrow episode of the crossover). It saw the Anti-Monitor trying to destroy the multiverse as several heroes and villains banded together to fight it. In the end, the remaining Earths combined into a single Earth as many characters, including Barry Allen and Kara Danvers, died. Producer Greg Berlanti explained to Entertainment Weekly that their adaption is “It’s our iteration of it. It’s not necessarily what they’d end up doing in the film space, so we could advocate for it that way, in terms of permission.”

The event will also take big inspirations from Alex Ross and Mark Miller’s famous comic series, Kingdom Come. The comic centers around Superman and the Justice League going into retirement after the public starts supporting heroes who kill villains. After a disaster in the Midwest, Superman decides to go back into action and inspire a new movement of the Golden Age. Brandon Routh, who also plays The Atom in Legends of Tomorrow, will pull double duty as he will reprise the role from 2006’s Superman Returns that made him famous. The suit is recognisable as the one from Kingdom Come, and he’ll be older, more world-weary. Kevin Conroy will make his live-action debut as an older Bruce Wayne from the future, after decades of voicing Batman in projects like Batman: The Animated Series and the Arkham Asylum games. He will be retired from crime-fighting but still operating with an exoskeleton, just like how Batman was from Kingdom Come.

Which Guest Stars are Slated to Appear?

With all these casting announcements, the real question is, who isn’t appearing in the crossover? The main cast of all five shows is set to appear during the event. Tyler Hoechlin and Elizabeth Tulloch will reprise their roles as Superman and Lois Lane, as they’ll set up the groundwork for their spinoff series coming in Fall 2020. Jon Cryer as Lex Luthor will also return, and John Wesley Shipp as Barry Allen/Flash from Earth-90 will appear.

Black Lightning star Cress Williams will play Jefferson Pierce and is appearing in the third episode. This marks a huge move as while Black Lighting is from DC Comics and runs on the CW, it’s completely separated from the Arrowverse. Johnathon Schaech is rejoining with the Legends as he’ll be back as Jonah Hex. Brec Bassinger will make the first appearance as Courtney Whitmore/Stargirl. She’ll headline a Stargirl spinoff series that’ll air on the DC Universe streaming service first, and then the CW will broadcast the episode the next day.

Outside of the Arrowverse, a lot of DC legacy actors will make appearances. Burt Ward, who famously played Robin the 1960’s Batman show, will appear, but they haven’t announced his character yet. Ashley Scott will reprise her role from the Birds of Prey TV show as the Huntress, aka Helena Kyle. There’ll also be a Smallville reunion as Tom Welling and Erica Durance will reprise their roles as Clark Kent and Lois Lane.

What Story Points Should You Know?

The Monitor: The central character to the crisis is The Monitor. He’s a godlike being that wants to save the multiverse from Anti-Monitor who’s far more powerful.
The Monitor will use tactics like testing Earth-90 with a big battle, and destroying the planet since they weren’t worthy of fighting. He challenged Earth-1, and they passed the test, so now they’ll be the ones to fight the Crisis.

The Flash Vanishes: A newspaper from the future with the headline “Flash Missing; Vanishes in Crisis” details how The Flash vanished into a burst of light after fighting the Reverse-Flash. While some details like the author would change because of changes to the timeline, the main story of The Flash disappearing is still the same. It went under a significant difference when the newspaper date (April 25, 2024) changed to December 10, 2019.

The Monitor told Barry that the Flash would make the ultimate sacrifice during the Crisis and die. When Barry goes to investigate what’ll happen during the Crisis, he goes to fellow speedster Jay Garrick for help. Garrick hooks up Barry to a machine that’ll let him see multiple timelines. He sees billions of timelines that show everyone dying, including his loved ones. It makes him realize that the only way to prevent it is for The Flash to sacrifice himself.

Another Flash Appears: At the beginning of last year’s crossover, Elseworlds, we saw a battle-torn Earth-90 after heroes and villains alike teamed up to defeat the Monitor. The only survivor is this earth’s Flash, played by John Wesley Shipp, who’s reprising his role from the 90s series The Flash. The Flash escapes from the Monitor, who destroys Earth-90 and decides to test Earth-1. The Flash unsuccessfully tries to warn everyone about the Monitor until he finally appears. He goes with the Green Arrow, Earth-1 Flash, and Supergirl to confront the Monitor, but he’s teleported away.

Lyla Becomes the Harbinger: It’s revealed that Lyla Michaels, Diggle’s wife, has always been working with the Monitor. When Lyla was on base duty in Afghanistan, the rest of the soldiers went on a routine mission but were killed by an IED. Filled with survivor’s guilt, she prayed to any god that would listen. The Monitor answered her prayers, and she started to work with him. She kept the Monitor a secret from everyone in her life, even from her husband. Eventually, everyone found out that Lyla is working with The Monitor. She explains the plan to Oliver and the gang that they need to build a weapon that’ll be useful doing the Crisis. When the weapon is finished, The Monitor repurposes the device so only Lyla can use it. She activates it and vanishes into a portal. Lyla returns as the sky turns red and tells the team that she’s now a Harbinger for the Crisis that’s now started.

Oliver’s Deal from Elseworlds: The events of Elseworlds had the Monitor giving a reality-changing book to Dr. John Deegan in order to test Earth-1’s capabilities. Deegan switched Barry and Oliver’s identities, then made them into criminals with no abilities. Both of them were summoned by the Monitor to explain how they outsmarted Deegan without any powers, but the Monitor wasn’t impressed. They manage to get their identities and powers back to fight Deacon. Oliver went to the Monitor and demanded that Barry and Kara shouldn’t sacrifice themselves.

Impressed by his bravery, he gave Oliver an arrow that would destroy the Book of Destiny. In return, Oliver will have to help the Monitor when the time comes. At the end of Arrow’s season seven finale, The Monitor arrives to tell Oliver that he must come with him and reveals that he’ll die during the crisis. Throughout season eight of Arrow, Oliver has been going on tasks like gathering dwarf star particles while going down memory lane before he dies.

With the Crisis on Infinite Earths premiering on the 8th of December, it’s going to be event television. Not only has events from the Arrowverse been leading up to this point, but it’ll involve huge stakes for all five shows. It’ll also be the climax for Arrow’s final season as after this event, there’ll only be two episodes left. Expect a grand scope and epic moments that’ll have everyone talking.