Make the Case: 7 of the Weirdest Kids’ Movies Ever Made 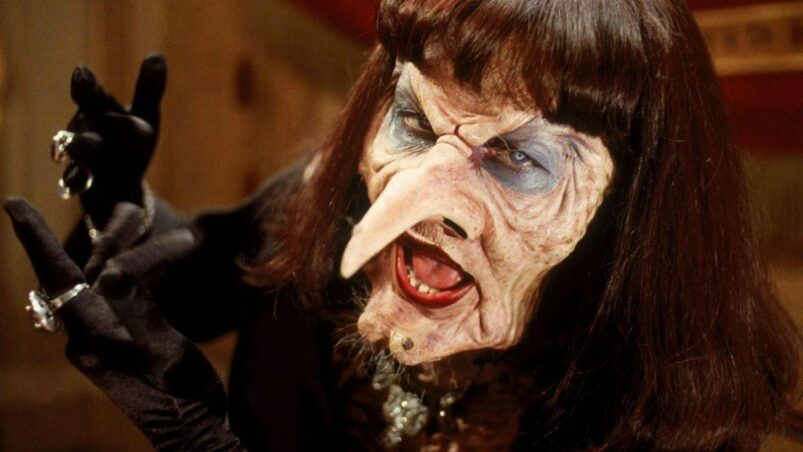 Trying something a little different this month at Make the Case, with the column expanding from 5 movies to 7. We’ll see how it goes. We may just jump back and forth between different numbers that suit me. Who can say. The world is madness.

Are kids today, or the youths as I think they’re still probably called by someone, somewhere, getting that good and weird stuff in their movie diets? It probably doesn’t matter, but there does seem to be a time in which people were making and releasing films ostensibly for children with elements that would seem largely foreign in most of the movies allegedly marketed to those under the age of say 15. Darker themes, or simply the eclectic shared vision of everyone involved not being quite as scrutinized by studios as these sorts of films are nowadays.

It just doesn’t seem like a lot of movies for kids are interested in being for an entire family anymore. Nor do they want to do anything with depth in not just the themes, but in how those themes are addressed and visually explored. I’m not mad about this, but some part of my own nostalgia sometimes comes down to seeing what sorts of movies are being marketed to kids in the present.

That’s pretty much what I’m speaking to this month, my own nostalgia. So while I’m looking for a cloud to go yell at, here are my 7 favorite kids’ movies that struck me as weird when I first saw them, and continue to do so in the present.

Will “weird” also inherently mean “good” for this edition of Make the Case?

Probably not. We’ll deal with that as we go, keeping in mind I have only my own specific definition of weird to go on.

Spy Kids might be the most accessible and commercially successful movie we’re covering. It’s also just as weird and relentlessly chaotic as the best Robert Rodriguez movies.

It’s a fun premise for an action movie, with two children (Daryl Sabara and Alexa PenaVega) becoming super spies in order to save their parents (Antonio Banderas and Carla Gugino) from the forces of evil. This could have simply been vapid, pleasing entertainment, but to assume this even in 2001 would have been disrespectful to Rodriquez and the people he has surrounded himself with. Spy Kids isn’t the deepest movie, but it has far too much love, charm, and sincere high energy to be regarded as empty.

It’s the fact that this is even a kid’s movie that can throw you, if you happen to watch it years after it was part of your childhood. Make some time for Spy Kids 2, as well, which features a scene in which Steve Buscemi comments on the nature of God. It’s been quoted and memed to death, but truthfully that’s not even the strangest thing that happens in this exceptional series. Hell, watch the whole franchise.

I watched Babe: Pig in the City again with my wife Cara, who’d not seen this film since she was perhaps 8 or 9 years old. The movie caught her by surprise as it was so grim and unexpectedly weird that she almost asked me to turn it off. This puts Pig in the City in the same category, at least as far she’s concerned, with the remake of Suspiria.

Babe: Pig in the City was an inevitable sequel after the first film in 1995 grossed an absolutely staggering $250 million dollars. If you weren’t around in the mid-90s, I don’t think I can accurately explain to you just how much people loved that pig and his dream of being a sheepdog. It’s a unique kids movie that also found a very receptive adult audience.

The sequel did okay, but nowhere near as well with critics or audiences. Perhaps because it’s one of the most unhinged and unpredictable mainstream films of the 90s. The city of the film’s title alone is scarier than a lot of horror movies from the same decade.

Keep in mind that we’re not ranking a damn thing here. However, if we were, Return to Oz might just be the one to top them all. At least for me, as the movie has been a favorite for the past 30 years of my life, but Return to Oz has remained intensely, overwhelmingly dark and even sinister for plenty of audiences.

This sort of sequel to The Wizard of Oz sets Dorothy (a standout performance by a young Fairuza Balk) on a decidedly bleaker Yellow Brick Road. The movie starts in a place far closer to the spirit of L. Frank Baum’s than the iconic 1939 MGM film, and it only gets crazier from there.

Return to Oz struck a weird chord with audiences in 1985. Adults didn’t quite know what to make of it, but kids responded to it. How do I know? Because it’s one of those movies seemingly every elder Millennial (Christ, kill me) has seen, remembered, and loves. There’s a mixed bag waiting at the end of every time you say “They don’t make them like that anymore,” but it’s still applicable to this film. For good or ill, they really don’t.

The Witches certainly seemed to be a stressful time for at least some of the folks involved.

It would be the final film Jim Henson personally oversaw (with the creature effects from his shop lending some enduring vitality and personality to this surreal children’s film) prior to his death in 1990. It was also not well-received by author Roald Dahl, who found the film to be a wretched adaptation of his novel (he particularly disliked the film’s decision to opt for a happy ending). Does any of that really matter? Not especially, unless it’s extremely important to you that the author likes the movie based on their work.

But these are still interesting notes for one of the strangest mainstream children’s films released in the 90s. The Witches has a powerhouse performance from Anjelica Huston as the head of an organization of witches dedicated to wiping every child from the face of the earth. Even if The Witches didn’t have her sublime villain performance, it would still have a story and execution of that story that assumes kids can handle a gently cartoonish live-action nightmare.

I continue to mutter things like “Netflix can kiss my ass,” when shows like The Dark Crystal: Age of Resistance and Santa Clarita Diet are cancelled before their time. Still, I’m at least left with one of the best examples of a childhood favorite being reimagined in a way that didn’t feel trapped in nostalgia, because Jim Henson’s original film The Dark Crystal was never going to be something anyone could recreate beat-for-beat in the first place. Do something exciting and different that also feels like a natural extension of the source material, or just don’t waste my time.

This is all worth mentioning because The Dark Crystal is still one of the most unique and boldest attempts to challenge an audience, particularly children, with not only a distinctive narrative, but also a distinct way of relating that narrative. The Dark Crystal finds seemingly thousands of ways to be odd and even a little scary in its premise of heroes and villains in a deeply original fantasy setting.

Perhaps most of all in the creature designs Henson and his studio came up with. They remain an unbelievable testament to human imagination, and go a long way towards understanding why nothing in the world is quite like The Dark Crystal.

Henry Selick is a curiously underrated director by many. The man behind The Nightmare Before Christmas and James and the Giant Peach is rarely mentioned in conversations about great directors, particularly in the animation field. Yet his body of work seems profoundly fixed on the notion that you can give kids films that are so well-rounded and willing to be offbeat, adults will probably find themselves getting pulled in, too.

Once upon a time, family movies had some semblance of trust in what they thought an audience could handle. Based on a book by Neil Gaiman, Coraline is perhaps his most complex and challenging work to date. A simple enough story of a young girl who finds a gateway to an alternate, eerily similar (emphasis on “eerie”) world to her own.

Coraline is a childhood story about appreciating what you have in your own life, especially your own problematic-but-well-meaning family, but Coraline nonetheless takes you to some pretty terrifying places over the course of expressing its point of view. For the animation style and character designs alone, you’re not going to forget Coraline if you’re planning to see it for the first time in the near future.

Even the basic premise of The Peanut Butter Solution doesn’t sound quite right when you read it over. A child (Matthew Mackay) deals with ghosts, hair loss, unstoppable regrowth of said hair, a crazed French art teacher, and an offsetting degree of anxiety over the fact that his mom has gone out of town for a little while. The Peanut Butter Solution can sometimes feel like less of a movie, and more of a collection of ideas that happen in chronological fashion by sheer magical coincidence.

Calling The Peanut Butter Solution a good movie isn’t quite right. It’s not a bad movie, but it’s going to be just too bonkers for some. Its unfathomable creative choices in the script and from the performances of its cast are more than enough to keep you entertained, but it takes a special kind of mindset to find all of this admirable.

To be clear, I do. Even a chaotic misfit like The Peanut Butter Solution is ultimately preferable to doing the same old thing. Nostalgia can be dangerous and pitiful, but it’s hard to watch something like this, and not think about the genial blandness of many family films being released at this point.

READ NEXT: Make the Case: Ranking the Muppets Movies From Worst To Best