Warsaw (PC) REVIEW – A Game of Hope and Despair

Warsaw is a good installment in the dungeon crawler genre. 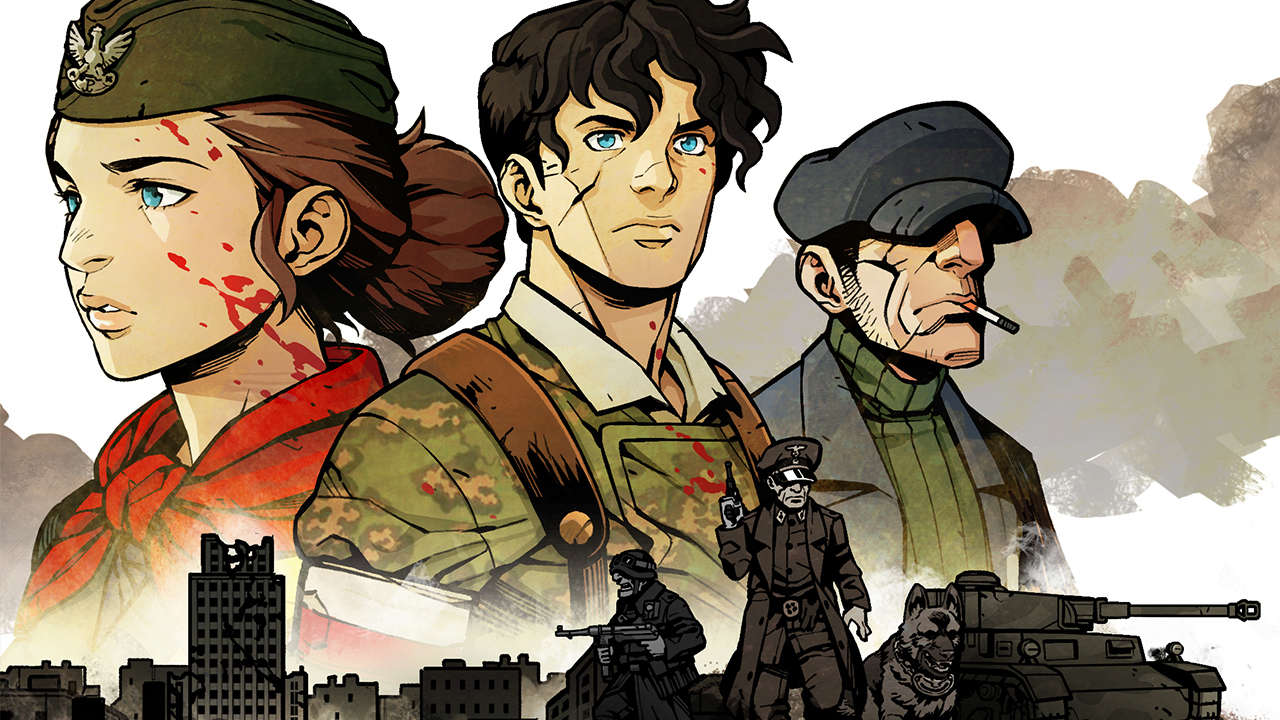 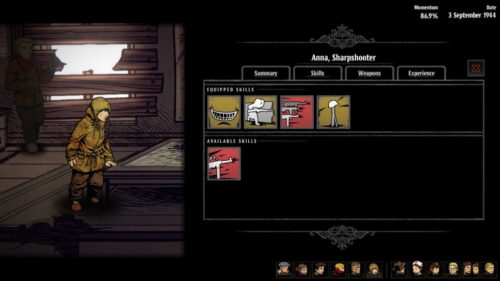 Ever wanted to be a part of a resistance fighting against tyranny and restore independence? This Darkest Dungeon-inspired strategy RPG does a great job of adapting a major historical event of WWII into a hopeful experience as the player fights to reestablish control of Warsaw and rebuild Poland. The battle for Warsaw is a long and arduous battle, but a battle that must be fought.

The game itself is set during the months of the Warsaw Uprising starting on August 1st 1944 with the apparent advance of Soviet troops inspiring the Polish resistance to take back their capital. There is no specific narrative or story and the game does not necessarily make any statement about the nature or the circumstances surrounding the Uprising, but instead focuses on portraying a dramatized experience of a people’s noble fight to regain what had been lost. This rarely touched upon historical event in gaming is in itself reason to experience and learn about the Warsaw Uprising, regardless of quality of mechanics. 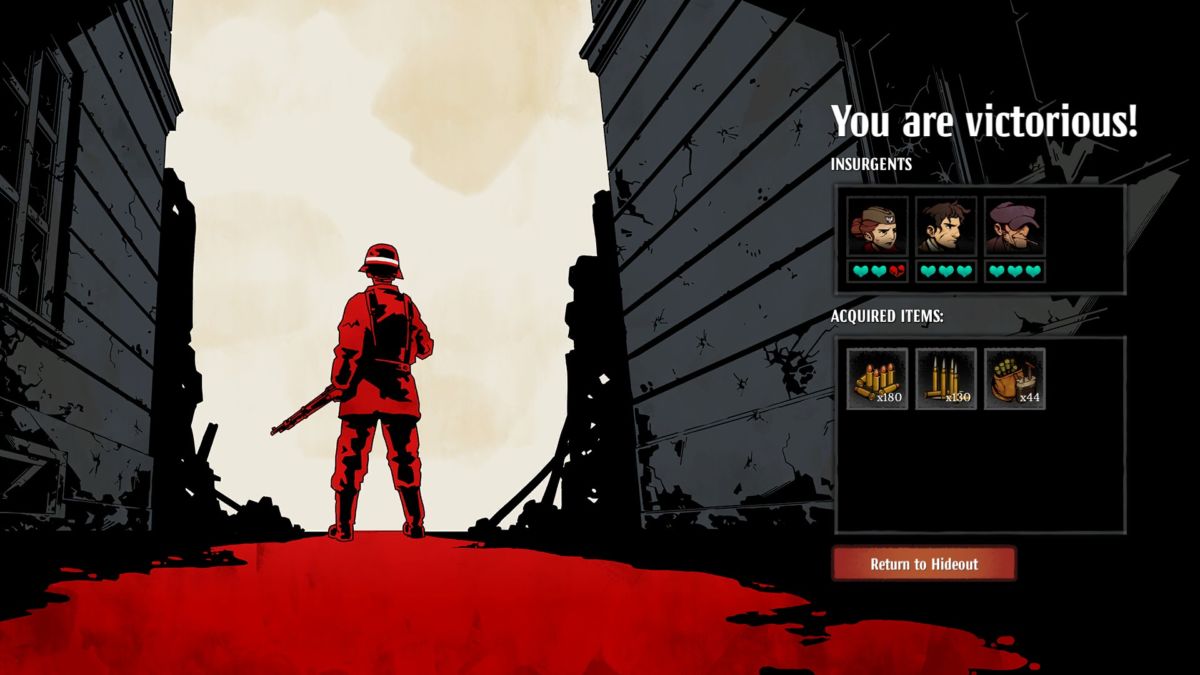 Warsaw, just like its main inspiration Darkest Dungeon, is split into both a strategic and a tactical layer. The strategic layer is further split into two distinct sections: the Hideout and missions. This is where the player can outfit their fireteam, read up on the stories of the different characters, resupply, recruit volunteers, repair weapons, let wounded soldiers heal, and pay respects to the fallen heroes of the Uprising. In the Hideout, players also get to choose different missions for their fireteam to go on and help the overall effort of the Uprising.

Missions have a wide variety of conditions and objectives, ranging from securing hidden stashes of supplies to taking out machine gun nests or disrupting reinforcing German tanks. The objectives are spread out over a 2D map of one of Warsaw’s many districts and the player must navigate their fireteam through plazas and maze-like narrow streets, all the while avoiding patrols and complete their given objectives. Once an objective has been completed, the fireteam returns to rest and prepare for the next mission. 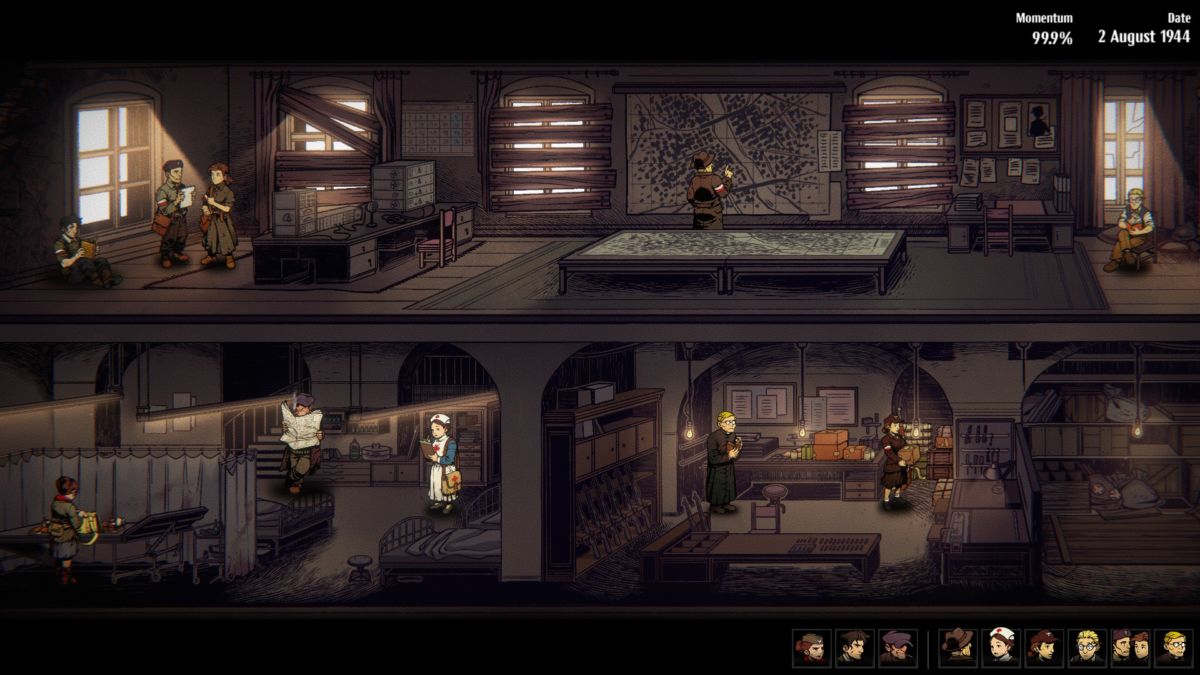 The developers at Pixelated Milk have done a great job of establishing tension and a sense of urgency in both the overall strategic situation and within missions themselves from three main factors. Whichever missions players choose to ignore count as automatic fails and will hinder the efforts of the Uprising, reducing its momentum. An effective way of looking at the Uprising’s desperate strategic outlook is treating it as a steadily sinking ship and the player’s job is to keep it afloat as long as possible.

The missions themselves are tension-filled due to the fireteam having a limited action point pool throughout, meaning exploration is limited and if the player runs out of action points without achieving the objective, the mission fails. Furthermore, dotted around Warsaw’s districts are wary German patrols that, if the player is not careful, will ambush the fireteam and initiate combat. Players can use items like flares, compasses, and bandages to make exploration easier, but these resources are scarce. 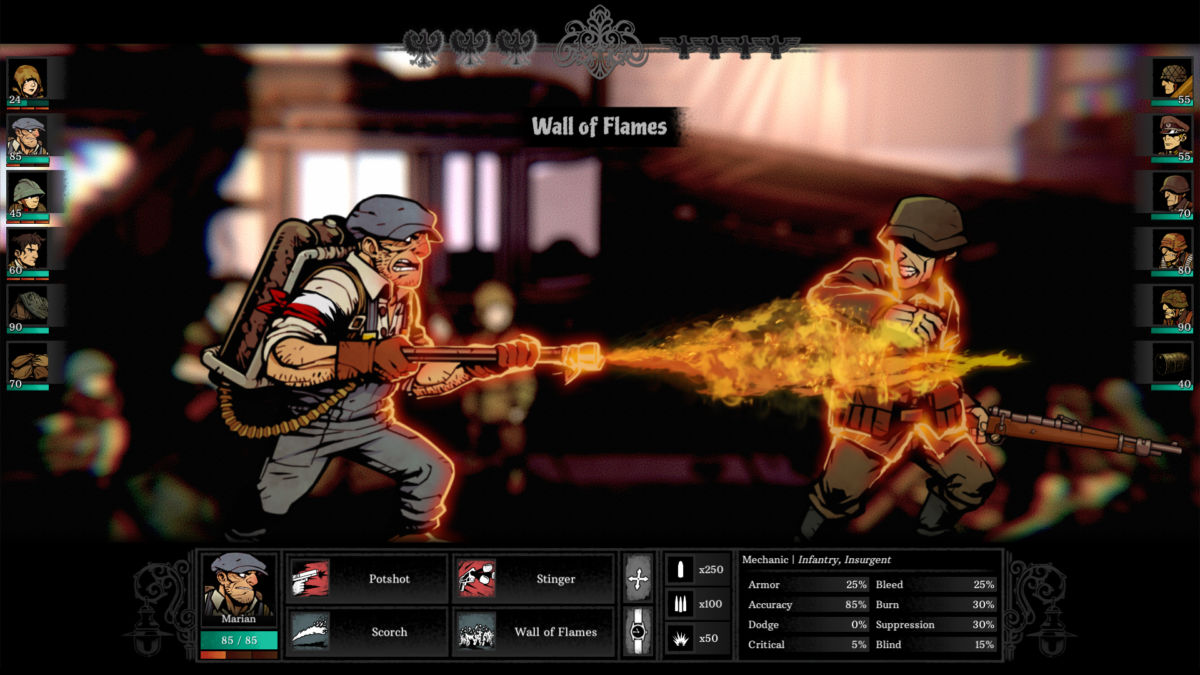 The second major piece of the game is the tactical layer. When a fireteam initiates combat through an attack, event, or ambush, the player goes to a separate mode, reminiscent of Darkest Dungeon’s combat system with two major differences: deployment space and cover. In Darkest Dungeon, players have their team of four deployed in a single lane with only forward and backward movement. In Warsaw, the fireteam can deploy on a two by four grid. In other words, the player has two lanes each with four rows for deployment and movement.

Cover is another iteration on the tactical system of Darkest Dungeon. When combat first begins, the game engine randomly determines cover spawn locations for both the player and the Axis. Not every engagement will have cover, but there are some skills which spawn cover during combat. Cover has a major effect on battle tactics to keep the fireteam safe and defeat the enemy. 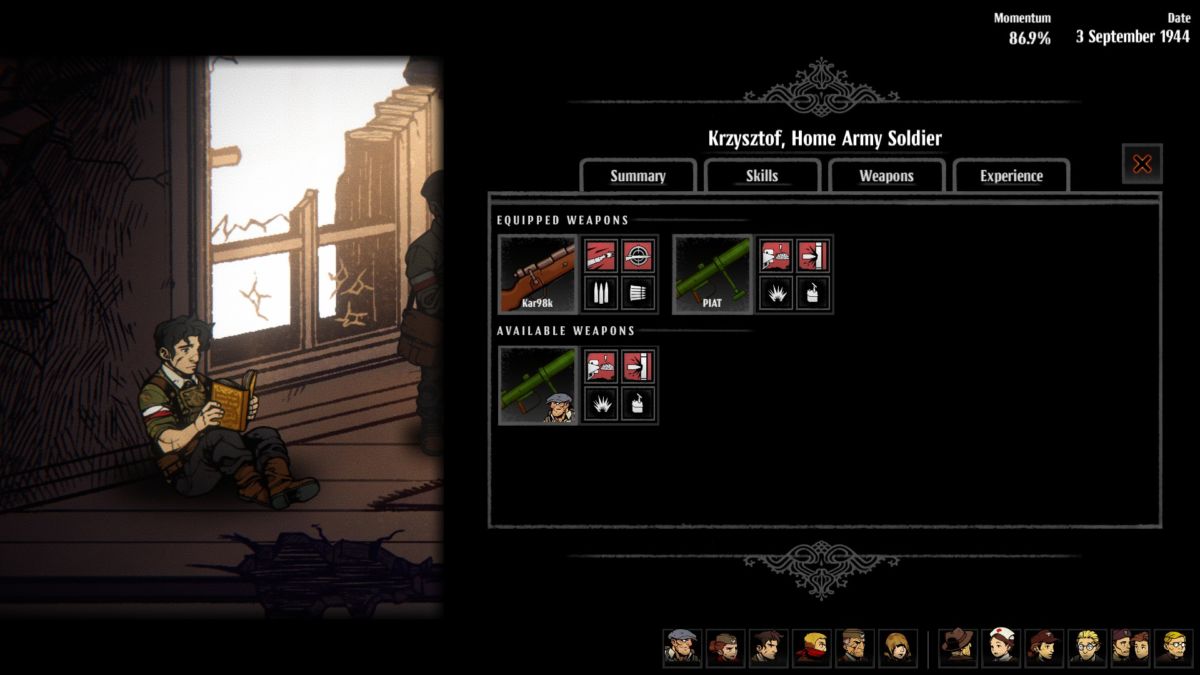 Each of the four deployed characters of the fireteam come equipped with their own class-determined weapons, associated skills, and abilities. Through a combination of offensive, defensive, and support skills, the player must defeat the randomly generated enemy Axis fireteam and keep their own safe from death. It is unlikely the resistance characters will go unharmed, but the player can make sure that they live to fight another day.

Regarding technical performance and options, Warsaw is not a very demanding game. There is a pre-launch options menu with minimal graphical presets, resolutions, and windowed mode. In-game, the only options available are audio sliders for master volume, effects, voices, and etc. 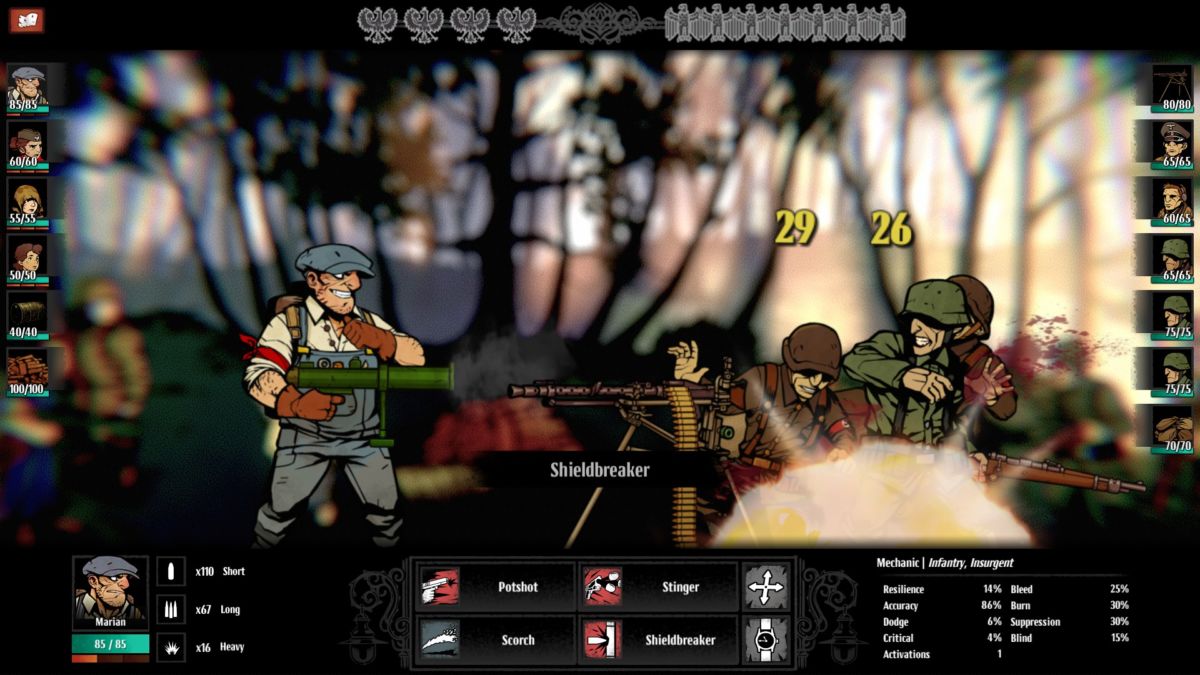 One of the main selling points of Warsaw that sets it apart from other games in the genre is the stunningly gorgeous artstyle, excellent atmosphere, and tone. The art is bright, realistic, and reminiscent of games like the Banner Saga, taking inspiration from old animated series. The music is subtle and solemn, and helping to accent the plight of the protagonists.

One small visual element that I found striking was the treatment of the eyes for both the Polish resistance and the Axis. The Polish resistance fighters, aside from specific characters who wear headgear that covers the eyes, have distinctly bright eyes. As they say, the eyes are the mirror of the soul and, since the player is meant to sympathize and lead the Uprising, the developers want the player to feel connected to their characters and not concern themselves with defeating a faceless and dangerous opponent. The Axis troops, on the other hand, have their eyes concealed or shaded. 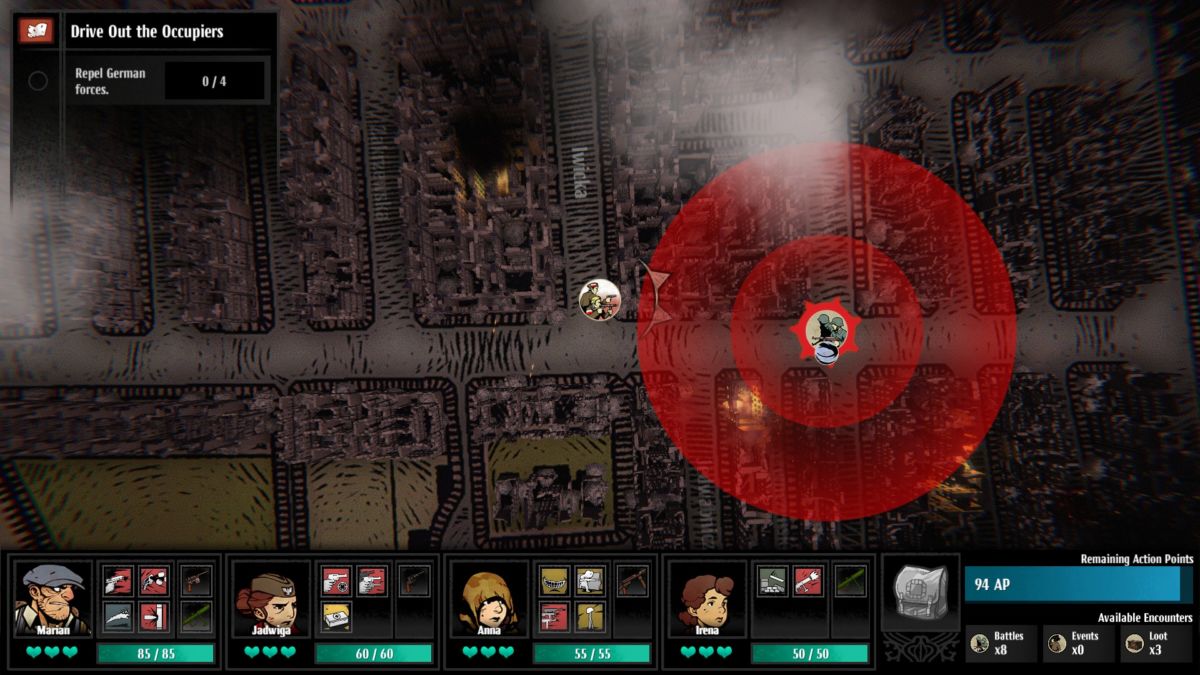 READ NEXT: 26 Best Modern PC Games You Can Play On Your Potato

There are two main challenges for dungeon crawler and endless war strategy games. The first is creating sufficient tension both strategically and tactically so that there is always a sense of danger, meaning, and weight behind the player’s decisions. In other words, a sense of tension where at any moment something will throw a wrench into the player’s efforts or some opponent will stifle progress, and so on.

The second challenge is avoiding, masking, or camouflaging the sense of tedium dungeon crawlers can elicit, as usually players will be repeating the same general gameplay loop, over and over again. Darkest Dungeon tackled these two challenges with some success; however, its greatest weakness was also a lack of tension. The theme of horror and the sense of dread, as well as boss fights, were meant to create a sense of tension. Yet the strategic campaign itself was so long that after a while even tactical battles became predictable, which dampened any tension and even meaning to the player’s decisions and actions. On the flipside and to its credit, it was an excellent and cynical way of illustrating war. 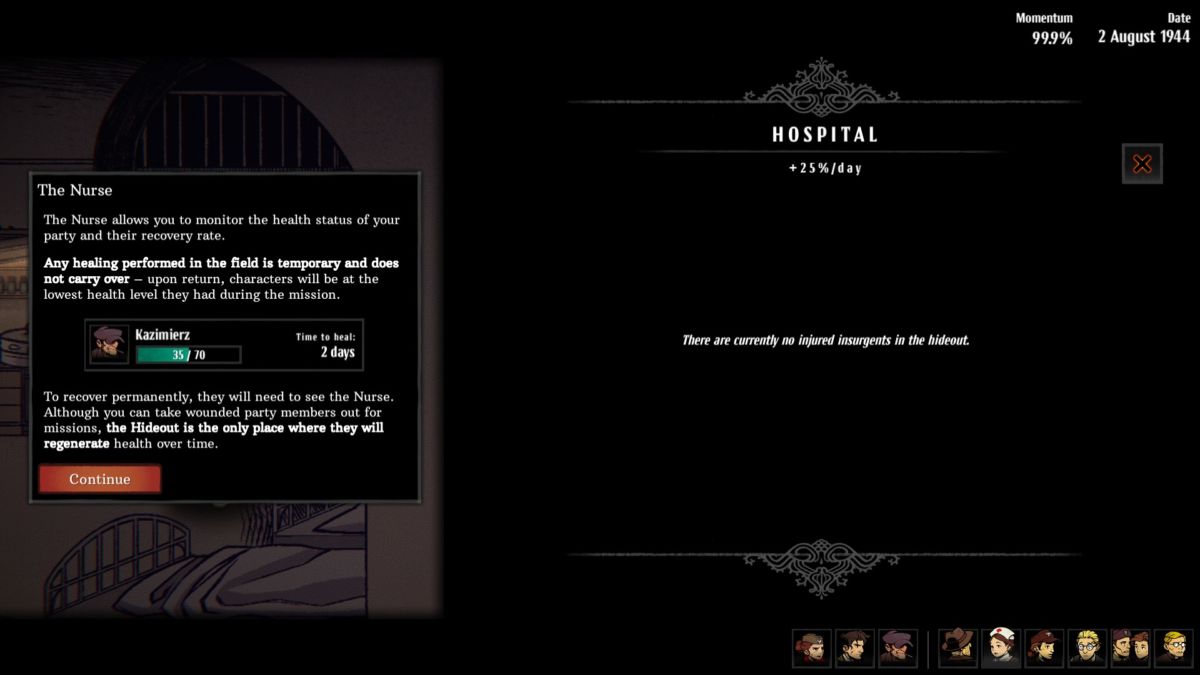 Darkest Dungeon did a great job of tackling tedium, with the responsiveness of the sound effects, the brutal visual feedback of skills, and the variety of locations and threats. Warsaw, unfortunately, does not succeed as well in this area. After several hours of gameplay and, especially in battles with larger numbers of enemies in a fireteam, combat begins to drag on. The main reason for this feeling of tedious repetitiveness is the responsiveness and skills, specifically damage over time effects. They execute relatively slowly and in turn, which just unnecessarily pads combat out. Also cover and some enemy types with high resilience and hit points make combat occasionally grindy and tedious.

On the strategic level and addressing the challenge of tension, Warsaw effectively creates a sense of urgency and tension as the success of the Uprising rests in the player’s hands, and depending on the player’s choices in events, missions, and success in battle they will either run the Warsaw Uprising into the ground or help it succeed. The sense of urgency comes not only from the fact that there is a timer and morale management system, a la XCOM, for districts, but also a sense of responsibility that the game instills in the player. Even though they may be practically in control of only a single cell of Polish resistance fighters, the game does its best to make the outcome of the Uprising rest on the player’s shoulders.

Otherwise, the greatest strengths of Warsaw are its presentation, a reliance on the historical setting, and small but meaningful iterations on the dungeon crawler genre. Combat especially, despite its problems of eventual tedium, is a good point of iteration where players have greater flexibility in equipping their characters with a variety of weapons and having more room to maneuver within battles themselves. Also, the number of enemy types does keep combat fresh and exciting throughout the campaign as the Axis throw new challenges your way.

Verdict
Warsaw is a good installment in the dungeon crawler genre with its historical theme, excellent artstyle, and atmosphere carrying the experience. However, it can feel tedious at times with the slow responsiveness of skills during combat and some grindy situations in combat.
8