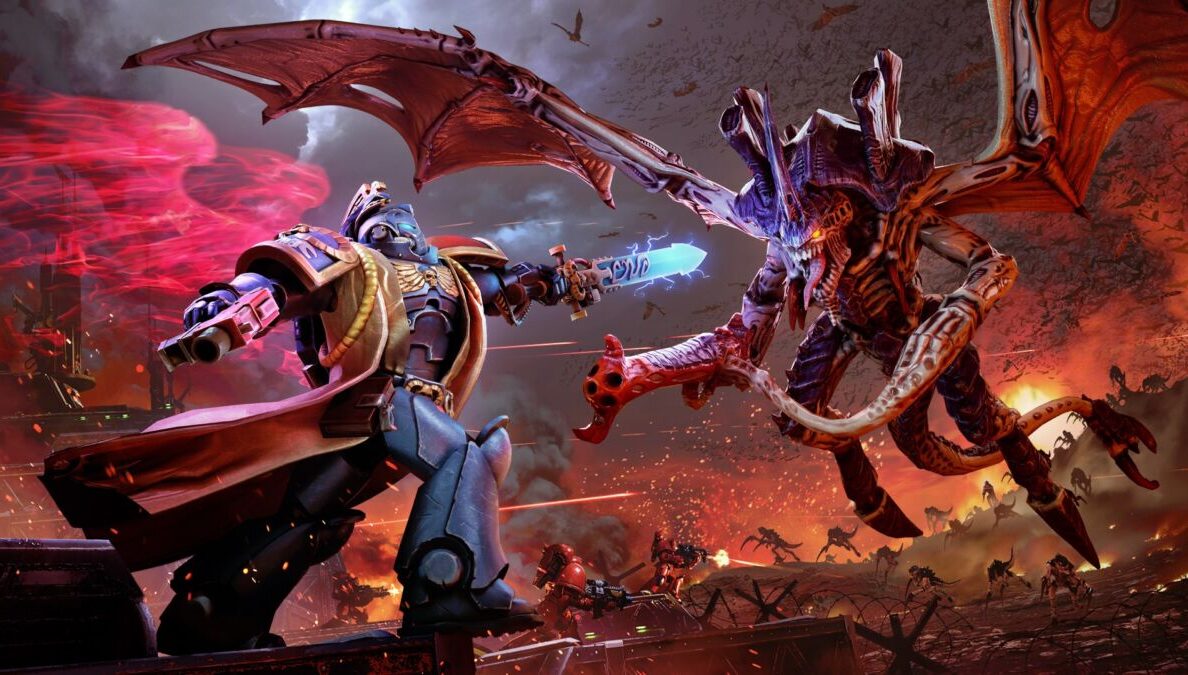 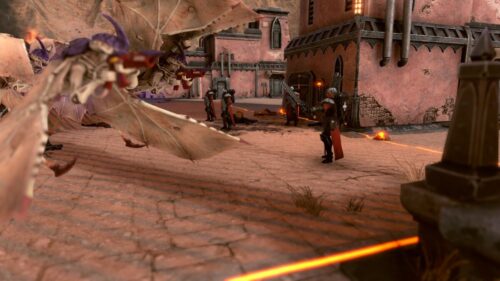 Despite the current and ever-expanding popularity of Games Workshop’s Warhammer franchise, most video games from both the fantasy and science-fantasy versions of Warhammer have struggled to truly reach breakthrough status. Only a select few adaptations have come close to being timeless, though there are no signs of the franchise slowing down in its attempts to hit that high mark. Will Black Lab Games’ Warhammer 40,000: Battlesector be one of those successful attempts and establish its legacy?

Battlesector is a turn-based tactics game where players take command of a company of Blood Angels Space Marines, essentially power-armored super soldier vampires, as they engage in a cleanup operation on the moon Baal Secundus after a massive and devastating invasion by the extragalactic everhungry Gigeresque Tyranids. Players can take part in the linear single-player campaign story where they will compose their forces, unlock upgrades, and equip powerful weapons. To spice the story up, the Sisters of Battle make an appearance to support their Space Marine brethren in their bloody mission.

In addition to the fairly lengthy single-player campaign, players can also engage in multiplayer tactical battles, playing as either the Space Marines or Tyranids (Sisters of Battle are currently campaign exclusive). For playing against others, the developers graciously included a fair number of modes, such as live matches, play-by-email, and hotseat, as well as plenty of customization options and battle maps. Altogether, the decently lengthy single-player campaign and varied multiplayer offerings provide plenty of content for players to sink their teeth into (pun very much intended).

Hands down, the biggest highlight of Battlesector is its presentation. Though certainly not a AAA budget game, the graphical detail, unit models, and choice of color gives the game a sense of vibrancy that effectively realizes the Warhammer 40K setting, with a flexible and neat photo mode tool for players to capture their most glorious and goriest moments of battle. It must be mentioned, however, that unit animations are a bit janky, especially moving Space Marine infantry or large entities dying, but overall it’s not too distracting.

The audio design of Battlesector is also quite notable with top notch voice acting delivering setting-appropriate dialogue and solid weapon effects. The battle music is fitting with plenty of operatic and pathos-filled themes and melodies that give each mission a sense of energy and dynamism, even if the main menu track is quite abrasive. Just like with the animations, there’s some minor audio mixing jank, especially for the Tyranids, but nothing too egregious.

However, the rest of the game is either unimpressive or mixed in its execution. As a major component of Battlesector, the narrative of the single-player campaign doesn’t really tread any new ground in developing the Space Marines as characters, but does, at least, provide an intriguing mystery about the Tyranid activities on Baal Secundus. As one of the first major 40K video games to prominently feature the newly-introduced Primaris Marines (bigger, better, badder than non-Primaris), it’s absolutely baffling that the developers elected not to include a major or supporting Primaris POV character from the start of the campaign for players to better understand this brand new addition to the franchise.

The core tactical gameplay loop has all the components necessary to make it a compelling experience, yet somehow leaves much to be desired. Don’t get me wrong, the tactical combat works and is far from the worst system out there, but it’s simply unimpressive and borderline shallow.

There are definitely enough weapons, abilities, and troop types for players to experiment with different builds and approaches, but the Space Marines unfortunately haven’t been implemented in a compelling manner. It comes down to any individual Marine unit being able to do too many things at once, which treads on the tenuous unit variety already in the game.

As an example, I found myself hard-pressed to justify taking the Bolt Rifle-armed Intercessors over the similarly priced Plasma Incinerator-armed Hellblasters, despite the latter lacking a grenade and clearly designed for anti-armor roles. On top of this, the campaign doesn’t include any clear unit limitation or resource system, meaning players can simply spam out a single unit and not really care about losses, incentivizing unchecked exploitation of optimal unit choices.

The Tyranids as a faction definitely feel far more compelling in their design, which only points out the missed opportunity of including a Tyranid-focused campaign. They have many more elements to consider, a wider array of weaknesses, and greater variance in unit roles, requiring not only engaging combined arms tactics, but also formation fighting and effective use of map geography. The Tyranids’ propensity for close quarters combat makes their tactical challenge far more involved and multi-layered compared to their power-armored counterparts.

Black Lab Games attempt to innovate traditional turn-based tactical tropes by adding a Momentum mechanic, where units will build up a meter from fighting and performing actions and, once filled, will have the option to empower an active ability or gain an additional action point. On paper, it’s a neat idea, but in practice while playing as the Space Marines, I rarely found myself using or needing the system to gain a critical advantage, whereas it seems like a vital mechanic for the Tyranids, which only adds to their compelling design and emphasizes the game’s uneven faction design.

There are also some tactical design letdowns that don’t accurately reflect the game’s own lore, which in turn stifles the game’s combat design, specifically for the Blood Angels. The game’s cutscenes and dialogue refer to the Red Thirst, a kind of ravenous thirst for human blood, and the Black Rage, an uncontrollable rampage from insanity, both of which provide ample ground for interesting risk versus reward tactical design. However, the former is represented solely as an uninspired positive effect, while the latter is absent altogether and has no explicit gameplay effect. In addition, there’s no clear significant effort made to tactically distinguish non-Primaris and Primaris Marines in a meaningful way, aside from obvious hit point and weapon loadout differences.

The available army lists are also a bit of a disappointment for both Space Marines and Tyranids with several glaring omissions of iconic units and a glaring lack of customization options. While the current rosters are serviceable, just like the gameplay, they’re uninspiring and only raise more questions about the quality of the game’s tactical design. Sanctus Reach, another similar game set in the same universe and also published by Slitherine, approached its army rosters and unit implementation in a more complete and compelling manner.

By far the biggest offenders for Battlesector, though, are the uneven mission design and the inefficient and unclear UI. The campaign missions are the definition of a mixed bag which include several exciting missions with interesting map designs and victory objectives, but also a number of bland and unimpressive scenarios as well.

The worst element of Battlesector’s mission design is the obsessive reliance on the “eliminate all remaining units” clause for the mission to end, which makes them feel repetitive, grueling slogs, especially in the last third or quarter of any given mission, and severely limits the campaign’s replayability (Black Lab Games’ previous title Battlestar Galactica: Deadlock had similar issues with replayability and repetition). I understand that the overall mission of the Blood Angels is to wipe out the Tyranid threat by engaging in glorious combat, but the narrative’s premise shouldn’t be an excuse to avoid creative mission design.

What makes the tedium of the campaign missions even worse is the lack of a player animation speed-up option, dumb AI, and map design. It’s quite odd that the player is allowed to speed up the Tyranid turn while waiting, but they can’t do so for their own troops. The AI is unimpressive at best and downright stupid at its worst and makes the Tyranids quite an uncompelling foe when not in the hands of a player.

The map design favours large, sprawling maps, which are a double edged sword for Battlesector, as on one hand they are quite big with a decent variety of terrain, which allows for creative use of geography and maneuvering. On the other hand, the large size of maps make the latter portion of missions hunting down remaining enemies a frustrating chore.

The UI definitely doesn’t do the game’s tactical combat any favors, either, which is most prevalent in lack of tooltips and inability to easily check stats and abilities when players should clearly be able to do so. For example, when clicking on an enemy unit in battle, players can read the characteristics and status effects the selected unit has, but for some reason they can’t check the stats of the unit’s weapon as there is no tooltip associated with it.

Luckily, performance fares much better in Battlesector with only occasional and brief frame drops from quickly shifting camera perspective while multiple units are moving. It does mean that systems that meet recommended specs should be able to run the game without much of an issue, but lower-end systems may encounter issues. The options menu is minimalistic, though covers most of the important customization options, including rebindable keys. I also didn’t encounter any major bugs (aside from the Tyranids themselves) or crashes.

Unfortunately, while Battlesector isn’t a terrible game, it’s definitely not a timeless experience. Essentially, the game feels too safe for its own good and the elements that should’ve been an absolute surefire win are also suspect in their quality, like the tactical combat and elements of faction design. There are plenty of other better tactics games, such as the previously mentioned Sanctus Reach, as well as Black Labs’ own Battlestar Galactica game. Warhammer fans should definitely check the game out at least for the voice acting and interesting Tyranid tactics, while strategy fans might want to wait for significant content updates before jumping in. 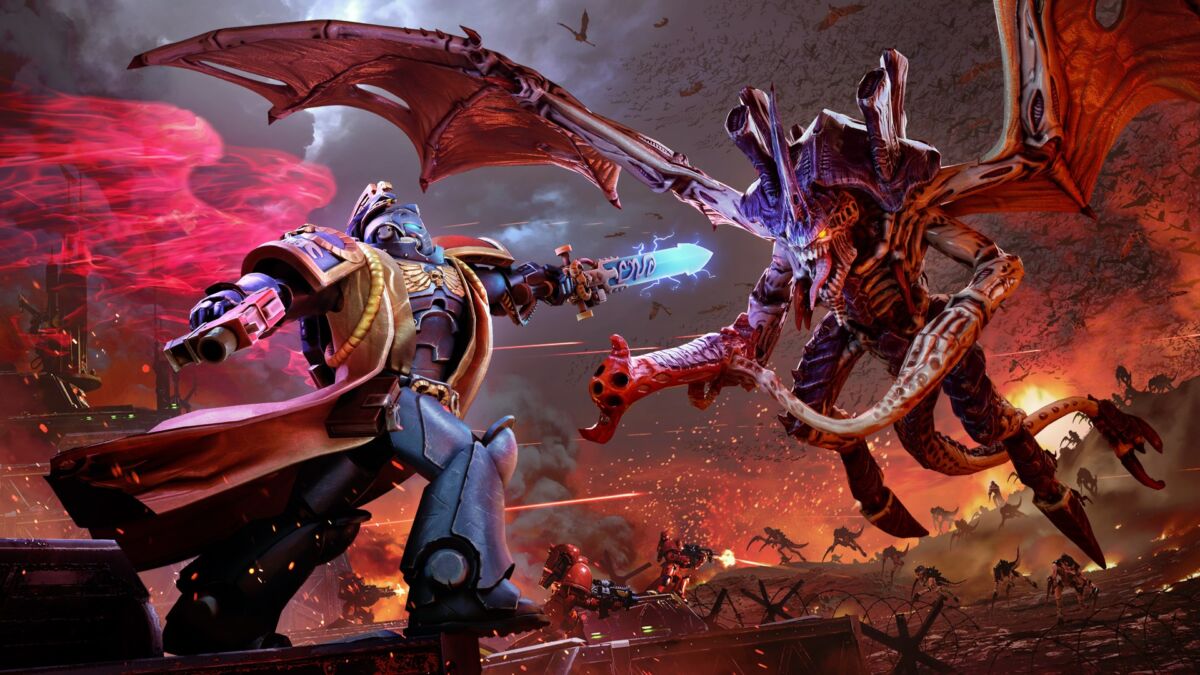 Verdict
Battlesector may attempt to give Space Marines a human face, but the game ends up being an incomplete suit of power armor.
6
Cultured Vultures is a pop culture website established in 2013 covering all things gaming, movies, and more. We eat your words.
All The News On The Biggest Games