WandaVision explores more of those classic sitcom staples, like having a baby, and reality itself breaking down. 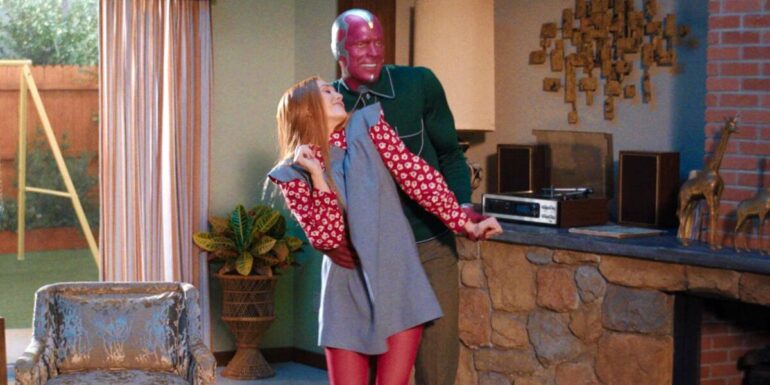 Well, now we are well and truly in it, my friends. WandaVision has begun peeling back the layers of its carefully constructed show, and it has raised the stakes considerably. In the third episode, ‘Now In Color’, the show enters the 1970s realm of the sitcom, with opening credits featuring the iconic hexagons from The Brady Bunch, and a very Partridge Family-esque theme song.

In the vein of family themed shows that the ’70s brought in, our lead couple is about to become parents themselves. You know that joyous time when you find out you’re pregnant, feel the first movements, and go into labour all in the course of one weekend? Wanda and Vision could tell you what that feels like.

Right at the onset, Vision is (understandably) rather alarmed by the rapid pace at which his wife is zipping through developmental milestones. His worries are of course justified, not least because an abruptly pregnant Wanda would be terribly inconvenient to their plan of ‘fitting in’. His concerns only increase with a couple of disconcerting incidents that happen through the course of ‘Now In Color’. There’s the time when he sees Herb busily sawing through his fence with an empty expression and the creepiest smile. Very Get Out vibes. And when Wanda experiences contractions, the house goes berserk and the entire neighbourhood loses power.

“Something’s wrong here, Wanda,” Vision says after the faintest look at the camera. This moment of fourth wall-breaking is significant, as this is the first sign of Vision exerting agency outside Wanda’s influence. The second he voices his opinion, the show glitches, and the scene replays, except that this time, Vision has no complaints.

It becomes more and more apparent in ‘Now In Color’ that not only is Wanda is directly connected to whatever happens in their surroundings, she is also veering on losing control of the situation. When her water breaks, it literally breaks: the water pipes start raining down on them. When a very chatty Geraldine shows up, Wanda has to hide her pregnancy in true sitcom fashion – with large props and oversized clothes. When she attempts to banish a stork that has come alive, it simply shakes off her scarlet magic powder and continues strutting about. Fortunately for her, Geraldine remains blissfully oblivious – almost too much so.

Another odd aspect of ‘Now In Color’ is the apparent abandonment of the pretense of realism. When Vision runs to find the doctor to attend to Wanda, he runs all the way over there, and whisks him to Wanda at superspeed. Unlike previous instances where residents have noticed something out of the ordinary, Dr. Nielsen distinctly remarks that he felt like he was flying. So does this mean that there was no need for all that Yakkety Yakking when Mr. and Mrs. Hart came to dinner? What is more, the Doctor just goes with the fact that the woman who just delivered twins (who, minor point, come out human but also fully towelled and sans mucus) was only four months pregnant when he saw her a few hours ago.

In addition to the doctor, we also get an indication that other residents of Westview also know that everything is not what it seems (side note – I just realised the Wizards of Waverly Place theme song fits WandaVision PERFECTLY). Herb and Agnes warn Vision that Geraldine is a stranger with ‘no home’. Of course, the audience knows that Geraldine is actually Monica Rambeau, the daughter of Maria Rambeau from Captain Marvel, but it is interesting to note that the neighours realise that she is an outsider, and Agnes is frightened enough of the situation to stop Herb from telling all.

This week’s advertisement for Hydra Soak (‘unlock the goddess within’) features the same woman from the other ads, and prominently references the idea of ‘escaping to another world’. Between all the insinuations about escaping and the obvious lyrics to Sleepy Jean that played at the end, the clues do seem rather on the nose this time. Then again, the show has proved we can’t really write off anything as final.

Because of the unnerving moments and hints that all is not what it seems, WandaVision has been compared to stuff like The Twilight Zone, The Truman Show and The Matrix. All three of the above feature manipulated realities and of far deeper actualities lurking beneath the surface. To me, however, the show is also reminiscent of Inception, especially with the themes of preserving loved ones in dreamlike realities.

We have already seen hints of Wanda being in control over her world in previous episodes – the forceful ‘No’ in the beekeeper scene was very telling – but this episode really drove the point home, what with the neighbourhood malfunctioning every time she had a contraction, the time that Vision underwent an actual glitch, and Geraldine literally being cast out of 1970s Westview. Wanda will do anything to maintain this idyllic existence, and she doesn’t care who gets in her way.

The show has also been great at playing around with the form of their storytelling. Last week, they used colour in a black and white environment to highlight when something was out of the ordinary. In previous episodes, the aspect ratio would widen to full screen at the end when you see that they are being monitored. In ‘Now In Color’, however, the aspect ratio changed to that used in widescreen cinema, further indicating that what is happening in the TV show ties in to what will happen in the cinematic universe.

Elizabeth Olsen has been doing great so far, but she delivered an absolutely standout performance in ‘Now In Color’. In the span of a half hour, she manages to invoke a spectacular range of emotions in the viewer. One cannot help but feel for her when she beams lovingly at her newborn children, and our hearts break a little when she talks about Pietro, acknowledging her life outside Westview for the first time in the show. And then, mere seconds later, you get goosebumps as she looms menacingly over Geraldine and wears a most discomfitting smile on her face after.

My biggest complaint with ‘Now In Color’ would probably be that it had far too little of Kathryn Hahn for my liking. Her subtly over the top performances in the first two episodes (particularly her delivery of ‘how is anyone doing this sober?’) were hugely instrumental in lifting the comedic quotient of the show, and her presence was missed. This also meant that except Paul Bettany’s consistently brilliant comedic timing and a hilarious sequence about breathing, this episode ended up rather low on laughs as well.

It is definitely clear that the show is not going to stick to one genre, but I did hope that this wouldn’t mean sacrificing the easy humour of the first two episodes. While the reveals this week were huge, they only confirmed what we had already begun to suspect in the last episode, and there were moments in this one that felt rather like placeholders before another Big Hint.

Combining the fact that critics were provided with screeners of only the first three episodes, and how Elizabeth Olsen confirmed that the fourth episode would see a ‘shift’, I think it would be safe to say that the show is well on its way to full fledged Marvel-dom in the coming weeks. With Vision’s suspicions and the neighbours’ erratic behaviour, the cracks have begun to show, and it will be exciting to see how far she will go in sustaining Wanda’s Vision of the life she never had. 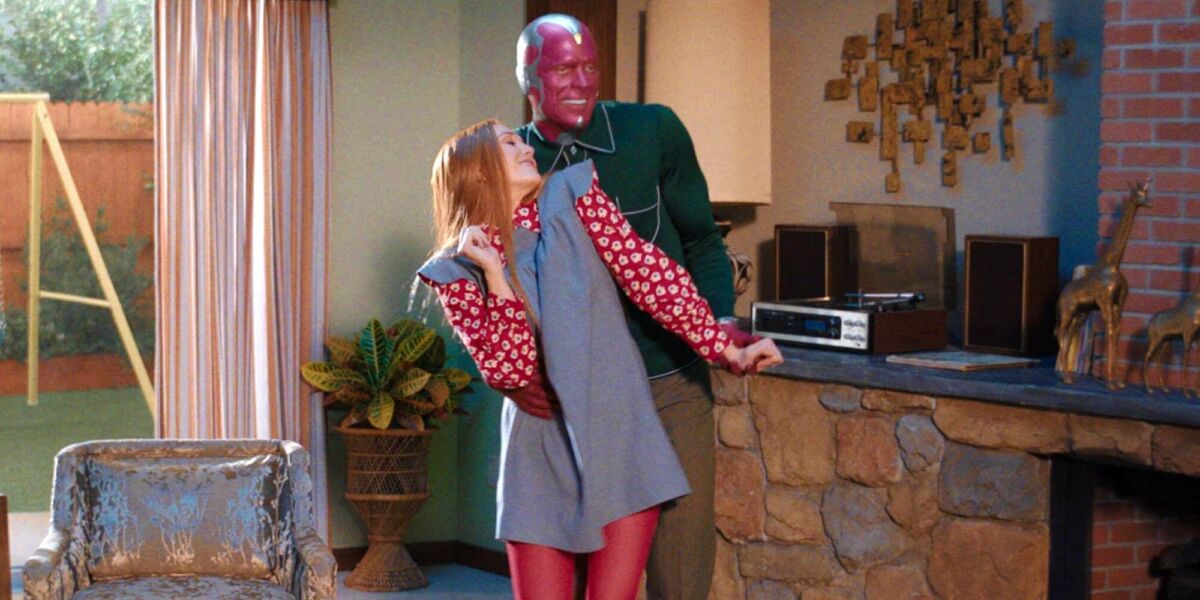 Verdict
We get a deeper glimpse into the motivations of the different characters as the show leans more into its Marvel parentage.
7
Cultured Vultures is a pop culture website established in 2013 covering all things gaming, movies, and more. We eat your words.
All The News On Your Favourite Games