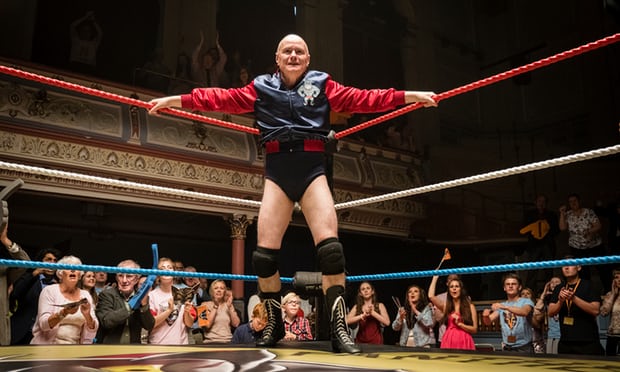 It seems that there’s an appetite recently for 80s wrestling on the screen, what with Netflix’s hit comedy GLOW hitting the streaming service last year. Now on this side of the pond there’s Walk Like A Panther, a once-TV pilot turned big screen comedy from writer-director Dan Cadan, invoking memories of those golden Saturday afternoons of Big Daddy, Giant Haystacks and entertainment for the whole family.

Stephen Graham leads the cast as Mark Bolton, the landlord of the in trouble Half Nelson, a pub in Huddersfield that is threatened with closure from the local brewery. After a video of Mark’s father and his old wrestling buddies, the titular Panthers, goes viral showcasing their moves dealing with a local troublemaker at a wake, a plan is put forward to revive the Panthers for a one-off show and raise funds to save the Half Nelson. Can the Panthers walk the walk one last time?

It’s fair to say that Walk Like A Panther is not exactly a film that takes risks. The plot is completely predictable and pretty much every turn is sign-posted a mile away. However, the film does have a lot going for it in its absolutely stellar cast and a genuinely funny script. The aforementioned Stephen Graham is reliable as always as Mark Bolton, a man that never quite managed to achieve his dream of becoming a wrestler like his old man and his mates, but relishing getting a second chance. Mark’s father, Trevor “Bulldog” Bolton, played by comedian Dave Johns (of I, Daniel Blake fame), as leader of the Panthers, anchors the ensemble well with a grounded everyman quality that while never getting to the charming quirkiness levels of the other Panthers, is the dramatic heart of the whole film.

The supporting cast, though, is filled with working class comedic charm and shines wonderfully. Julian Sands’ Tony “Sweet Cheeks” Smith, a lothario in a love triangle, is wonderfully game as the face of Panthers, all looks and style if not much in actual mettle. One of the women in the love triangle, Jill Halfpenny’s Lara “Liplock” Anderson, is terrific value as a woman who can talk the talk but can sure as hell also walk the walk in the ring. All cocksure and strut, her Lara Anderson is one of the strongest characters in the film, literally and metaphorically. Steve Furst’s Popsy Wilson Jr., the promoter who sees the opportunity for financial gain by reuniting the Panthers, is perfectly cast as the weaselly promoter with a history with Bulldog Bolton. There’s also great turns from Scroobius Pip and Guz Khan, two hapless security guards in training, Rob Parker and Adam Fogerty as a tag team of gentle giant brothers and Robbie Gee, a sweet but tough wrestler with a past with Furst’s slimy promoter. There’s even a cameo from Lena Headey as Bulldog Bolton’s boss.

However, the star of the show is Neil Fitzmaurice’s Cliff “Edge” Morris, a deluded security guard in and out of the ring who can’t get a list or analogy right to save his life. He gets the best of the one-liners and his comic timing is perfect here. The aftermath of one painful exchange with Halfpenny’s Lara Anderson in will have the audiences in stitches.

Walk Like A Panther’s strongest asset, however, is in its working class sensibilities. On its surface it may be about wrestling but truthfully it’s a film about community. It’s about how pubs can be not just a place to get pissed, but can be hubs for entire communities, focal points that bring people together. It’s a film that strives for an innocent sense of nostalgia, not just in its love of 80s wrestling on ITV, but for a time when communities were just that, innocent in their love for each other.

Verdict
Walk Like A Panther isn't going to win any awards or end up on anybody's best of list, but when it's this damn likeable and just wants to simply please you, with the added joy of just seeing so many high quality working class actors together in a big British film, it's impossible not to like. Quite simply, it's easy.
7.5
Cultured Vultures is a pop culture website established in 2013 covering all things gaming, movies, and more. We eat your words.
All The News On Your Favourite Games