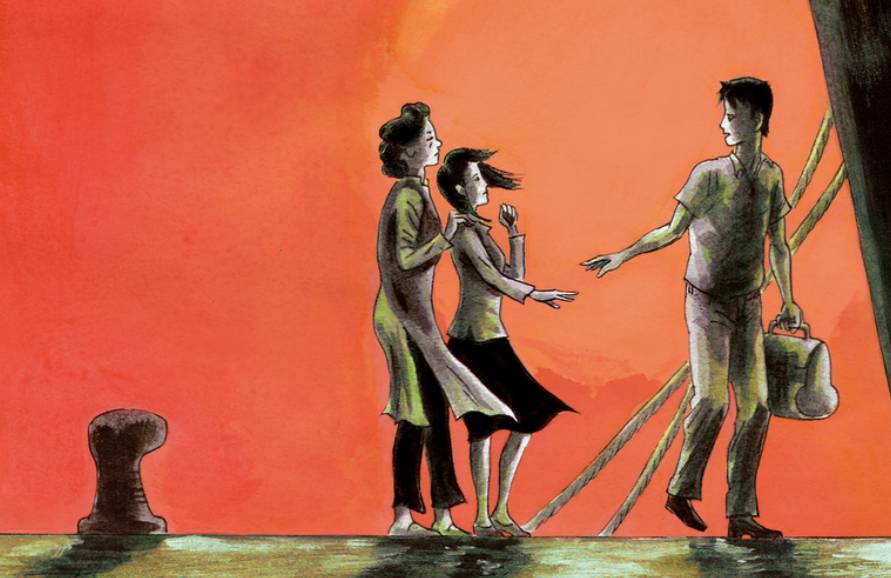 The life of Vietnamese Memories began when the author, Clement Baloup, finally heard the true story of how his father had been forced to leave occupied Vietnam, and evolved from there into what is more accurately a graphic biography. It began as such a personal piece of work, and that passion – easy to find throughout – is what drives this book to greater heights.

In the first half of the graphic novel, Baloup recounts the stories of several Vietnamese people who fled their country and made a life for themselves in France, and those stories are truly fascinating to see rendered in graphic novel format. In the second half, he follows the story of a journalist who discovered a lost generation of young Vietnamese men who went to France during the Second World War and helped to develop rice farms in the fields of the south. This journalist eventually became a campaigner and helped to make sure this lost generation was remembered for the contribution they made to the war effort.

is an unassuming book. The stories that it recounts are fairly simple ones, and Baloup doesn’t dress them up as anything else. Just because they are simple, though, it doesn’t mean they are anything less than important. These are stories of real trauma; the trauma of being displaced, forced to leave everything that you know with no guarantee that you will ever see it again. Many of Baloup’s narrators never saw their families again, but he doesn’t do them any disservice by making a drama out of that fact. He just tells the stories, respects them and their narrators, and trusts that the words be enough. In most of the cases, they are.

There are occasions when the historical aspect becomes a little bit overwhelming for the graphic novel format, and it gets a bit wordy. It could have done with some of the much longer paragraphs being cut, or at least cut down. It would be wrong to say that the graphic format can’t be used to tell non-fiction stories, because obviously it can and it has been done very successfully in the past. On this occasion though, I do wonder if it was the right decision.

That being said, what really makes this book shine is the artwork. I am a simple soul when it comes to graphic novels; if the artwork looks good, I read it. I do literally always judge the book by its cover. Baloup’s artwork is as simple as his writing, but it is lovely.

He distinguishes between past and present with black and white, and coloured artwork, rendered in what looks like watercolours, and pen and ink. It gives all of the artwork a dreamy and hazy quality which compliments the stories being told, especially as so many of the narrators are looking back with fondness on their lives in Vietnam. It also means that some of the art is quite harrowing to look at, especially one scene where a young boy is making his escape with his family on a boat that ends up being lost at sea. When you get to those pages, you will know what I mean. The drawings are so honest and open here that I couldn’t look at them.

The stories, of course, are themselves honest and open too, as well as painful, both for their narrators and for a reader. This is a timely volume; looking back at the displacement of Baloup’s narrators, victims of war and occupation, brings us around of course to the truth that none of this has stopped happening. People are still displaced and forced from their homes and their lives, and transitioning to a new culture never seems to get any easier. Baloup is telling old stories here, but he could also be telling new ones, and we shouldn’t ever underestimate the importance of books like this in helping to understand where we are now.

Verdict
A beautiful looking little book that punches above its own weight in terms of historical value. Review copy provided
8
Cultured Vultures is a pop culture website established in 2013 covering all things gaming, movies, and more. We eat your words.
All The News On The Biggest Games