Behold, a game that makes cardboard boxes exciting instead of stressful. 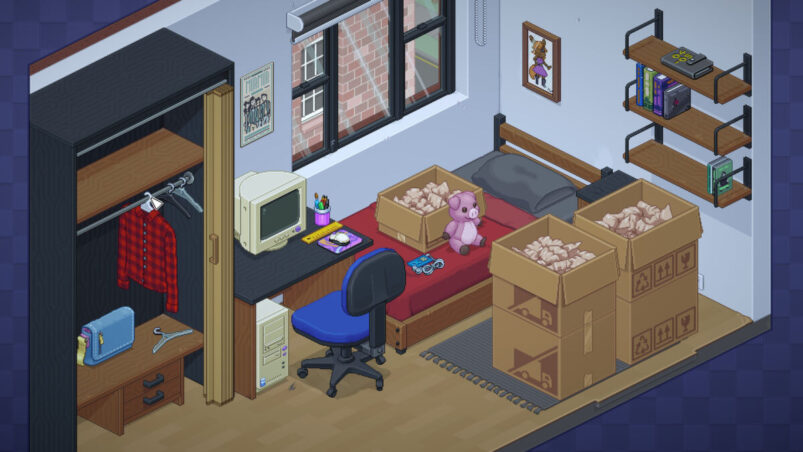 2021. It has been what some call “a year”. To celebrate this collection of sun rotations, we’re looking at the best games of 2021. Next up: Unpacking.

Unpacking’s appeal is in its simplicity. You open boxes and find places in your new home for all of your stuff. Relaxing lo-fi beats play in the background. It’s a brilliant game that takes a simple premise and executes it with style and panache. Unpacking’s marketing referred to it as a “zen puzzle game,” an accurate title for the low-stress, high-engagement playing experience.

It turns out that unpacking boxes and sorting belongings into their new place in a home can in fact be a lot of fun when it’s not your new home or your new stuff. As someone who enjoys helping other people move but hates and dreads moving myself, I do find the process of taking inventory of a life something that’s most fun in the abstract. Popping open every new cardboard box in Unpacking and pulling out a random piece of clothing/appliance/huge ass computer monitor feels like unwrapping presents, and there’s a constant joy in moving from box to box, feeling a sense accomplishment that is harder to capture in real-life unpacking which always comes after days of stress and toil.

Unpacking is such a successful game because it sticks to what it wants to be — a chill game about emptying boxes and filling up rooms — and covers every facet of its premise to the best of its ability. There’s no filler, no added layer of mechanics or forced obvious narrative. The items and objects, these things we accumulate through our lives, are enough.

Every new home moves the story forward in time by a few years, and as you move the nameless main character into her first dorm, then into a crowded apartment with roommates, and beyond into other new living situations, you get to know her only through the items she brings from home to home. A small ukulele gets shuffled around and shoved in a closet for example, delivering a tidy symbol for how hard it is to bring childhood passions into adulthood.

I played Unpacking right as my girlfriend was making the final preparations to move into my apartment. She also played Unpacking, and even beat the game before I did. We’d pass the Switch back and forth, taking turns filling in rooms, sharing what we thought about our unseen main character, and complaining about how many freaking books this person has — where are we supposed to put all these books, are they even novels or are they just notebooks?

A week later, when she actually moved in and brought a car full of boxes for us to dive into in real life, I put on the Unpacking soundtrack. We hung up her clothes, rearranged the kitchen cabinets to accommodate new cups, and relaxed to the zen sounds of Unpacking’s music. Moving my girlfriend in wasn’t as fun as Unpacking (real life boxes are heavy), but this game did help us take it easy and find the quiet, simple joy of making a space our own. That’s quite an achievement for a video game.