And not just because of pregnant Raz. 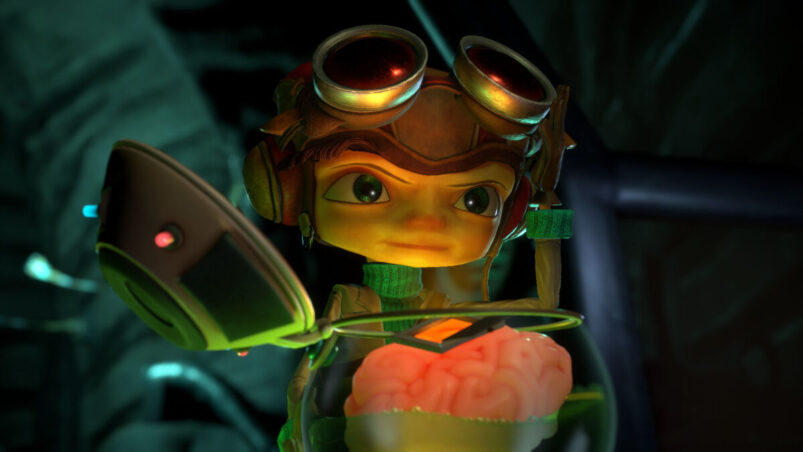 2021. It has been what some call “a year”. To celebrate this collection of sun rotations, we’re looking at the best games of 2021. Next up: Psychonauts 2.

Double Fine have never ever been ones to play it safe. By constantly pushing the envelope through expansive writing, deep characterization, and some of the most off-the-wall video game worlds put to screen, Tim Schafer and his entourage of wizards have made a name for themselves by being creative masterminds with a penchant for meticulous detail. Psychonauts 2 proves they never lost that inspired edge. With personality and charm seeping from every pore of its characters, levels, sound design, and even loading screens, a series of fantastically designed 3D platforming gauntlets succeed in shining a light on mental health through captivating writing, stellar platforming, and theming unlike anything seen since the first Psychonauts.

Though a retread this is not. Psychonauts 2 makes it a point, even jokingly, to remind the player that even though this game takes place less than a week after the original 2005 game, this is an entirely new contemporary affair seeping with originality. Themes such as isolation, addiction, and schizophrenia are openly and safely displayed and discussed through the guise of game design. The new Mental Connection feature acting as both a movement system and a way to delve into the thoughts of the characters’ brains you inhabit was a genius way for the writers to present even more dialogue for each of the game’s profound personalities peppered throughout.

Raz is still the headstrong smart aleck he’s always been, clever and witty, while also being engrossed in the curiosities of the world around him. His weight and animations make controlling him a dream, and in a game where there’s a fresh line of dialogue nearly every minute, it’s a miracle that none of Psychonauts 2’s script gets boring by the time the credits roll. Or it would be a miracle if we weren’t talking about some of the finest artists in the business.

I’d be remiss not to mention composer Peter McConnell amongst those artists. Having been with Double Fine and Tim Schafer for years, they’ve established quite a repertoire when it comes to setting the tone for their various adventure games over the years. Psychonauts 2, in many ways, has some of McConnell’s best work featured, and in just as many ways, the work featured is McConnell’s best. Drawing inspiration from LucasArts adventure games of old and of course the 2005 original, he’s simultaneously created a soundtrack that both pulls on some nostalgic strings and hammers on some fresh ones to make some of the best music you could ever ask to jump around to.

And jump around you do. When the expansive hub world isn’t drawing you away with its bevy of irresistible collectibles and mild puzzle solving, you’re breaking down mental trauma and sorting emotional baggage through the best “linear” 3D platforming stages this side of Super Mario Galaxy 2. Levels aren’t just mind-bendingly designed, they’re absolutely stunning, filled with fantastic material work, beautiful CGI-level lighting, and an artstyle that calls back to the first game while making confident strides all on its own.

In an effort not to simply repeat what I’ve said in my review, and with the generous gift of hindsight and afterthought, I can easily say that Psychonauts 2 isn’t only the best game I’ve played in 2021 — it’s the best game I’ve played in years. The gameplay is tight and designed around every curve of the environment. The story isn’t a long awaited cash grab by some burnout game devs, it strives to be told through every humorous beat in its seemingly endless dialogue trees and beautifully high concept level design. The transparent way it discusses and presents mental health by forgoing social taboo to talk plainly moves from striking into empowering, creating a cerebral safe space where it’s okay to care about each other. Psychonauts 2 is a game that, much like the first, will be embedded in my psyche for years. I may not be able to change your mind, but there’s no doubt in mine that Psychonauts 2 is 2021’s Game of the Year.

READ NEXT: How Psychonauts 2 Sets the Standard for Gaming’s Mental Health Representation