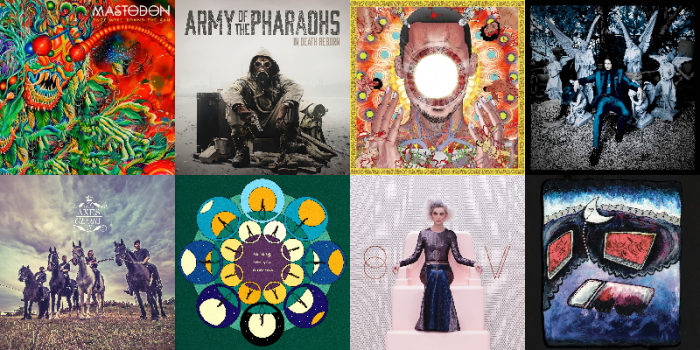 It’s that time of year when all the end of year lists come out to play, what with it being the end of the year and all. Well, you’re going to find yourself bombarded with lists from all angles on all subjects.

I can assure you now, though, you’d never find Cultured Vultures taking part in such a thing. No, we here at Cultured Vultures have just come together to give you the absolutely definitive best of everything that was 2014. In this particular case, myself and my fellow music-team members came together to debate and draw blood until we’d filtered the musical gold from 2014. This ain’t no last minute thing neither, we’ve been working hard at this since we first started gathering up the best of the year only halfway through it. Have a look HERE to see how those predictions have fared in the long run.

Anyhoo, without further ado, here are Cultured Vultures’ 25 Best Albums of 2014; each entry coming with a few words from the Vulture that championed it most, and of course a musical taster to boot.

Oozing with authentic warmth and flowing melodies, Lost in the Dream is a must listen from 2014. The band deliver incredible tracks throughout, yet each one seems to deliver something new to the party that is Lost in the Dream. Jam-packed with ricocheting guitar chords and flurries of synth, Lost in the Dream is an emotive celebration, a career defining LP for the band. The nasal, Dylanesque vocals of front man Adam Granduciel swirl beautifully with layers of space-age indie-rock to create an enveloping blanket of irresistible sound. Highlights include ‘Suffering’, ‘Red Eyes’ and the eight minutes of ambient warmth that is ‘Under the Pressure’. An album impossible to forget. Luke Bailey

Clark’s seventh, eponymous LP feels like the turning point in a long and illustrious career, and the definitive example of his own brand of discordant electro. His production and songwriting is more honed than ever, boasting more depth and resonance than his earlier albums whilst harbouring the same outright appeal on the dancefloor. Similarly, like his other work, Clark feels like an exercise in the dramatic for all the right reasons, moody and arresting with well-founded visions of grandeur. It’s well placed in the lineage of Warp Records, with echoes of Squarepusher and Aphex Twin hitting key notes in songs like the lead single ‘Winter Linn and The Grit In The Pearl’. Nathan Harris

Hundred Waters’ second album is simply stunning, and that’s not an overstatement; intro track ‘Show Me Love’ makes sure you know that straightaway with its lush acapella harmonies. As the breathy beauty seems to subside, it bleeds into the astonishing ‘Murmur’ which is as good a representation of how things will go from here as you’re gonna get; seamlessly blending perfectly polished production, shimmering synths, lost and found percussion sounds, truly haunting harmonies, and angelic vocals. Imagine one of the most nocturnal and serene folk bands usurped their traditional and acoustic instruments for synths, programmed beats, electronic layers, and experimental R&B production. This album gets darker(‘Cavity), lighter(‘Out Alee’), more magical (‘Innocent’), more experimental(‘[Animal]’), and more. Hundred Waters (who featured in the first ever Pulse) hold your hand through the album as you stare, hallucinating, at a still and moonlit lake, all the while The Moon Rang Like A Bell works its way under your skin. Morgan Roberts

Lower Than Atlantis’s self titled 4th album is a mature departure from their previous records. Chock full of massive songs designed to fill arenas worldwide, and soundtrack a million people’s summers. Choice cuts include the impossibly catchy, yet intricate, ‘English Kids In America’, ‘Emily’, Mike Duce’s love note to his dog, and lead single ‘Here We Go’. The Bloc Party meets The 1975 influenced ‘Words Don’t Come So Easily’ deserves to be another hit in the making too. Each track on this album stands on it’s own and all contribute to the musical variety on show. Plus, the lyrics are excellent. Alex Mitchell-Fox

Nearly a decade after his debut record Monsieur Sexe, Mr Flash returned to much guffaw with his monumental follow up Sonic Crusader. With a greater emphasis on continuity and structure, SC is a dazzling triumph of French Touch; with beautiful swathes of 80’s glitz and hip-hop synths. The marriage of John Carpenter style scores and guest verses from artists like Action Bronson into one consistent record is worthy of note alone. It may not bare the immediacy of more mainstream Ed Banger artists like Justice, but SC is definitely one of the label’s most important releases since SebastiAn’s colossal Total in 2011, and arguably one of the best electro albums released this year. Nathan Harris