Thymesia: How To Beat Varg 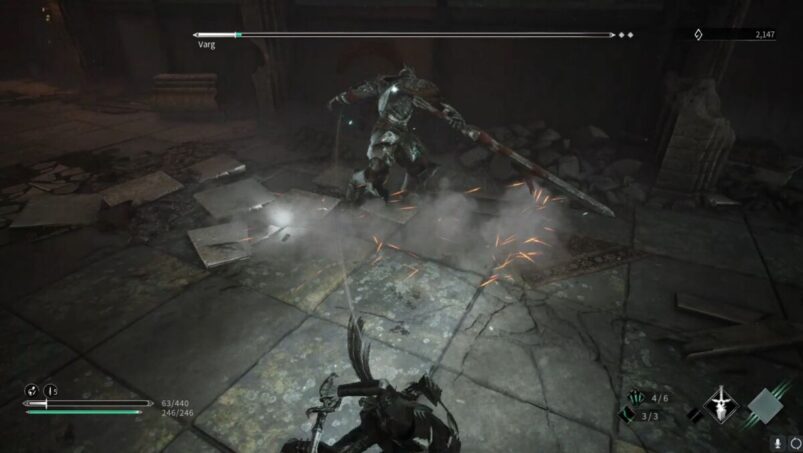 Thymesia‘s third storyline boss is a familiar face from the beginning of the game. While your first encounter with the titanic knight Varg may have caught you off guard, this time you’re armed with the tools you need to beat him. This doesn’t mean it’s a walk in the park, however, since the best way to beat this huge opponent is to be on guard while landing constant attacks.

If the giant sword-wielding knight bested you in your first encounter, this encounter is your payback. Varg has a few quick moves and tests your ability to dodge and parry well. There are a few talents and tools that will shut him down completely if you can parry him, though, while a few select plague weapons will make the fight easier for Corvus to navigate if you choose to primarily use your dodge.

Plague weapons to consider for this fight are the Axe, Greatsword, Blood Storm and the Shield. The Shield and Greatsword are excellent “get off me” style weapons that, especially if levelled up, offer great ways to subvert moves you might have problems with. These two weapons are also the perfect choice if you chose to learn the knight’s 3 hit combos in order to parry the hits. The Axe is the perfect choice if you choose to primarily dodge the giant sword swings, as it offers a way to quickly get back into the action to continue your offensive either by charging in or throwing it if you unlock the Extended Action. The healing from Blood Storm is also a good choice if you choose to dodge more than parry, as creating distance between you and this boss is easier than it might seem at first.

The best way to beat Varg is to learn his attacks and parry them. His bread and butter assault is a 2-3 hit combo that consists of one quick swing around him, followed by a few downward slamming attacks that are much slower. Parrying his attacks will deal huge amounts of Wound Damage, especially with the Precise Parrying talent, and his combo enders leave him open long enough to start a combo using claw attacks. The Short Claw talent works incredibly well for this, especially at level 2 due to the lifesteal it grants Corvus, and allows you to stay on top of the boss in between swings.

After beating down his first life bar, Varg incorporates the devastating grab he used to eliminate you the first time around. This grab is easy to see coming and your Long Dodge will ensure you get a safe distance away quickly. Otherwise, the fight remains largely the same.

Beating Varg can be tough as he does a ton of damage with each hit. After he gains access to his grab, staying around him after he lets out a giant roar is a surefire way to get tossed. Varg is the first time a boss can eliminate you in a single combo if you’re not ready, so be sure to bring your A-game to this challenging fight.