Just when they thought they were out… 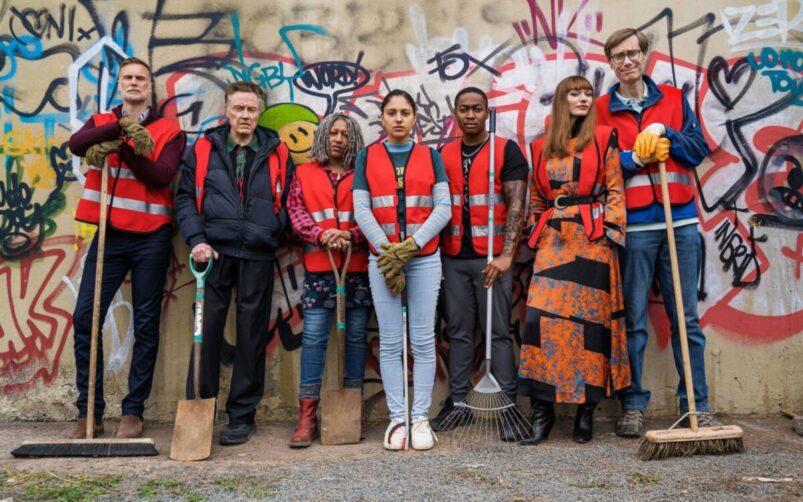 Following up on a tightly structured crime caper isn’t easy. With all of the loose ends tied up, all of the impending doom finally resolved and each and every twist wrung out until it can twist no more, there can often be a sense of disappointment when a show such as The Outlaws returns for its sophomore showing. Tapping back into that energy can be like attempting to inflate a bouncy castle with a hole in it: it takes a lot of effort and there’s always the risk of things going flat.

This isn’t a problem Stephen Merchant’s West Country crime caper suffers from as it makes its welcome return to screens following an excellent first run. As both seasons were filmed back-to-back in 2020, it’s unsurprising to find that Merchant and co. have found themselves pretty much immune to second-album syndrome as the gang of misfits at the Bristol Community Centre immediately find themselves pulled back into the gritty underworld from which none of us truly believed they’d escaped in the first place. While they might have spent much of the show’s first run evading the bad guys, our gang of lovable offenders now find themselves forced to deal copious amounts of narcotics to pay off a debt owed to a sinister mob boss known as “The Dean”.

The gamekeepers, it seems, have turned poachers this time around, although things are never quite so simple. What makes The Outlaws work on its return is that the narrative tension is often manifesting in two different directions. No longer are we witnessing naive community workers scraping around at the bottom of the criminal pile, but neither is this the birth of a new untouchable crime syndicate. The Outlaws are very much, to quote Stealers Wheel, stuck in the middle, and it is this morally ambiguous, and ultimately extremely precarious position, that gives Season 2 a little added spice.

All of this tension allows the show’s central players to continue developing, and while some grow and evolve more than others, it’s usually been one of Merchant’s strengths that he understands where a character needs to go in order to enjoy a satisfying narrative arc. Be it Darren Boyd’s John learning to stand up to his overbearing father or Clare Perkins’s Myrna attempting to cope with her guilt-ridden PTSD as a result of accidentally murdering a policeman, there’s rarely a sense that the central crew are stagnating, even when they find themselves slightly out of the plot’s central loop.

It also acts as an excuse to allow certain more tertiary characters from the first season to come to the fore in the second. I’d always felt that Charles Babalola’s complex but exceedingly charismatic Christian Taylor deserved more of a look-in initially, so it’s gratifying to see him take more of an active role for Season 2. More integral, too, is Claes Bang (yes, that’s his real name) as The Dean, a pallid-faced walking corpse of a figure who exudes a razor-edged malice that only occasionally topples over into complete caricature.

Things can get a little sketchier when The Outlaws tries to cram in the many secondary and tertiary characters it has at its disposal, often ditching the well-rounded feel of its core cast in favour of thinly-drawn cut-outs for its supporting players. A laughably entitled economics major who condescends to Rani at Bristol Uni, not to mention Greg’s odious posh wanker coworker Spencer, are hardly what you’d call “three-dimensional”. Members of the ultra-left Bristol Justice Collective, meanwhile, are also thinly drawn as lentil-munching, chai latte-necking, hemp enthusiasts who look like they haven’t managed an orgasm in thirty years and blame all of their problems on the evils of “The White Man”.

In fact, the show can never quite make its mind up about how it views the “straight white man,” portraying him as both a cause of all the world’s ills but also not uniformly deserving of derision. On the one hand, long-suffering John’s diatribe that being a “middle-aged white bloke” doesn’t automatically make him Harvey Weinstein to a panel of employers feels as though it’s intended to warrant genuine audience sympathy. On the other, the rest of John’s sort (Merchant and the always brilliant Christopher Walken notwithstanding) are presented as privately educated posh twats with all the ethics and sensibilities of a politician suggesting the poor should burn their own children to stay warm during the winter months. At times it feels as though The Outlaws is attempting some incisive social or political commentary but never has the guts to really follow through on it.

It’s this constant tonal duality, however, that gives The Outlaws its unique flavour, even if it occasionally acts as its greatest hindrance. Like the protagonists themselves, the show is always operating on two distinct levels and in two separate realms: the lighter, more Office-inflected comedy larks exhibited predominantly by the likes of Merchant and Jessica Dunning’s Brent-esque supervisor Diane, and the darker, grittier urban drama lying underneath that has increasingly become the main thrust of Season 2. Scenes in which Merchant talks about vaginal dryness in a lift could have been lifted straight from an episode of Extras, and they don’t always live in complete harmony with dimly-lit images of young men having their legs broken or being asphyxiated by a plastic bag.

The show’s creator is still brilliant and his hapless lawyer Greg still makes for one of the crew’s most endearing members, but just occasionally you sense the shtick from other Merchant properties slipping into proceedings. A scene in which Diane and Eleanor Tomlinson’s Lady Gabby are attempting to make Greg seem less like a person “on the sex offender’s register” could have been lifted straight from the Hello Ladies playbook. It’s all unmistakably funny, but Merchant can’t quite escape the usual routine of accidentally dunking his tie in his tea or making a string of social faux pas, lolloping around like a bug-eyed stick insect let loose on the set of the Wire. That is, of course, the whole joke of his character, but more serious, weighty scenes can be slightly undermined nonetheless.

Still, The Outlaws is still a far better show for Merchant’s presence both in front of the camera and behind it. In fact, what the BBC crime caper has once more demonstrated is just what a talent its creator is, especially as a director. The Bristolian’s solo directing debut Fighting with My Family demonstrated a natural eye for the cinematic, something that has very much bled over into the bold, urban Western-inspired feel of The Outlaws. Too often, British shows have a hint of the parochial about them, feeling small and a little too televisual, but The Outlaws is so well directed and so lovingly made that it pulls off the convincing con of making you believe you’re watching something far weightier and more substantial. If ever there was a show to make you believe that Bristol was the dark, beating heart of the UK criminal underbelly, this is it.

It seems, then, that Merchant has done it again. The Outlaws’ return to our screens has been a truly welcome one, the Bristol-based comedy crime saga growing into something greater rather than stagnating and struggling to find an identity after such a strong debut run. Like its opening foray, Season 2 rewards the investment of time, unfolding and expanding while only very occasionally sagging under its own weight or being undermined by tonal inconsistencies. With such a consistently great cast and a true master at the helm, The Outlaws is the best thing to come out of Bristol since Massive Attack. 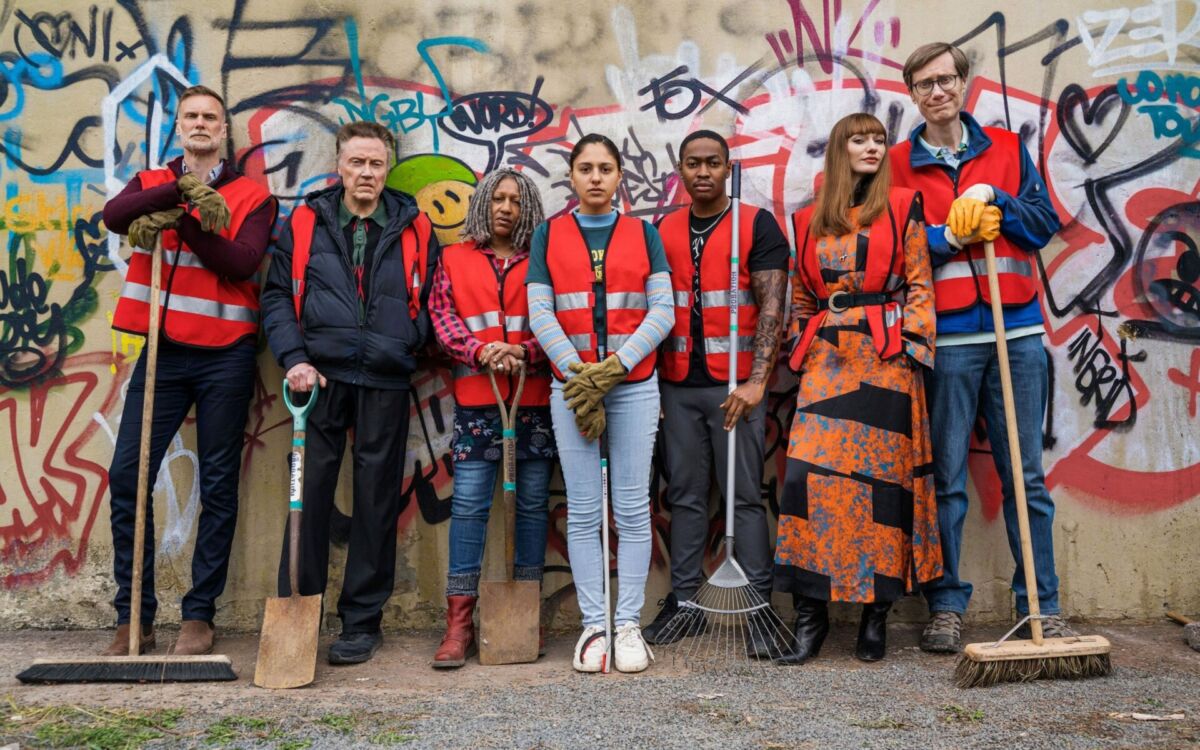 Verdict
Just as charming and satisfyingly offbeat as the first time around, The Outlaws Season 2 continues to play to its strengths to deliver some criminally good times.
8
Cultured Vultures is a pop culture website established in 2013 covering all things gaming, movies, and more. We eat your words.
All The News On The Biggest Games