Podcasts and cartoons, together at last! 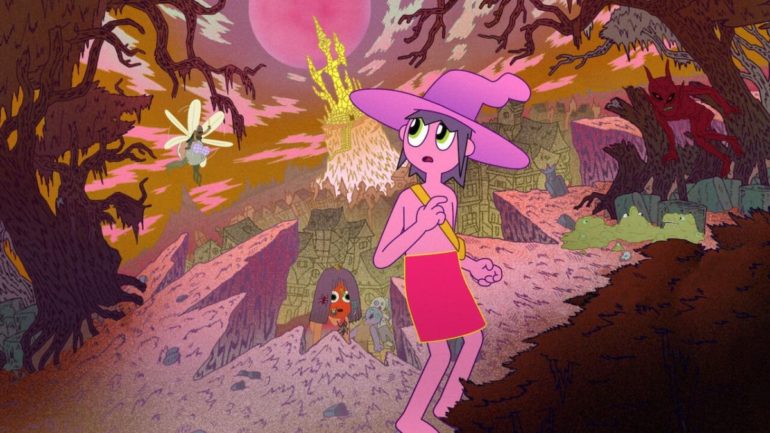 Nobody could accuse The Midnight Gospel of not knowing its audience, not when it opens with a rambling discussion about the legalisation of cannabis taking place against the backdrop of a zombie apocalypse. One hesitates to use pejoratives like ‘slacker’ or ‘manchild’, but there is a certain type of person who would have come up with an action plan for a zombie apocalypse – likely in a giggling fug – when that was all the rage in the late 2000s/early 2010s, and if I do not count myself among that class I am at worst adjacent to it. It is this vague but distinct slice of humanity which The Midnight Gospel is unapologetically made for.

In itself this is not a criticism. Knowing what you’re aiming for and delivering upon it is something to be admired. Cooking shows, or the sport of racing cars very fast, have never had any interest in appealing to anyone other than those who are already fully on board with the concept, and it’s never done them any harm. The issue is with the way The Midnight Gospel goes about doing this, approaching it from two ends at once.

There is a fundamental disconnect at the heart of the show, not in any nebulous ideas about themes or what have you but rather the literal disconnect between the audio, which is Duncan Trussell’s largely unadorned podcast, and the video, which is Pendleton Ward’s classically Adventure Time-style craziness. These have nothing to do with each other. If you thought that zombie apocalypse was going to lead into demonstrating some wider point about drugs and the liking of drugs, you’re going to be disappointed.

This disconnect is no secret, it’s basically the show’s USP, but for much of the show it feels as if the audio and the video are duelling each other for the viewer’s attention rather than working in tandem. Which is a shame, because most of the time the setting is irrelevant and inconsequential, and being a simulation anyway, the natural question is: why even bother, surely it’s just a distraction?

It could be argued this is in the spirit of podcasting. Most podcasts cheerfully embrace the idea of being stuck on in the background while you drive, exercise, sculpt, whatever it might be. So here, either the audio or the video can be the passively-consumed, not-really-paid-attention-to backdrop to the other.

(What’s also in the spirit of podcasting is having Joey Diaz involved. I have it on good authority that when two or more people sit around a microphone and start chatting, that man will simply appear from thin air, like a Cheshire cat.)

But this cannot help but feel like the creators didn’t have the confidence to let either side of it stand on their own. Which is a shame, since neither side is badly done: the audio has a nice variety of guest stars who are allowed to get their points across, the animation is lively and inventive, at worst cutesy but never uninteresting. And when the audio and video do acknowledge each other’s existence, it undermines the way that they carry on completely independently the rest of the time. Sometimes when they come together, it lands, but more often it ends up being a throwaway (or worse, ‘random’) aside.

This largely disconnected style is reminiscent of that classic of modern animation Archer, whose characters would often enough carry on their petty, self-serving arguments while going through the motions of being secret agents. But that made a sort of sense, displaying the characters were jaded enough to no longer find the business of international espionage in any way remarkable. Nobody could become inured to the sheer variety of zany wonderlands presented in The Midnight Gospel, so to not have the characters comment upon them rings false.

Adapting a purely sound-based work for the screen by adding animation isn’t unheard of. This process spawned The Ricky Gervais Show as most people know it, though to slavishly animate three people sitting around a microphone talking is simultaneously lazy and making unnecessary work (compared to, say, The Joe Rogan Experience, which just films its participants), so full credit to The Midnight Gospel for not falling into that trap.

Most podcasts are big, sprawling discussions, rather than manicured twenty-minute blocks. So the actual conversations of The Midnight Gospel, which are probably closer to being the central column of the whole edifice, end up feeling a bit curtailed – if the episode’s topic really tickles you, then it’ll inevitably stay more surface-level than you might want. Though to the show’s credit, having the sounds and pictures rolling along independent of each other allows both sides to cram in more material than they otherwise might. And for all of the sparkly, jingling-keys visual stimulus of the animation, if the conversation does hook you the visuals aren’t so much that you won’t be able to follow what they’re talking about.

It’s unfair to judge a work for not being exactly what you’d prefer it to be, and so I’m not going to criticise it for not having the animation conform better to what’s being said. But what’s not unreasonable to say is that for some ninety percent of its screentime, The Midnight Gospel is for all intents and purposes two unrelated works stapled roughly together.

I’m not even opposed to such an approach on principle, as this was the gimmick of Chris Ware’s spoof comic strip ‘Thrilling Adventure Stories (I Guess)’, but that always maintained a strict division between its images and its words. This lent it a coherence in structure, and made it obvious that Ware was subverting a familiar, recognisable format. If ‘in the style of Adventure Time’ can be said to be a familiar and recognisable format in the same way – and to the intended audience of young adult cartoonheads, it probably is – then The Midnight Gospel is doing something similar by layering Trussell’s podcast on top of this wiggling, surreal baseline.

But to subvert anything requires there to be some structure in the first place. Pendleton Ward’s plasticine worlds seem to actively, proudly resist having any sort of fixed structure – ditto the classical pop-philosophical conversations of a podcast, which embrace subjectivity and being able to spiral off wherever they please. Nonetheless, if either or both sides of this sound appealing to you, whatever mild flaws there are in the execution probably won’t even register.

Verdict
If you like the kind of topics podcasts cover, you’ll like this. If you like cartoons, you’ll like this. The creators are taking the gamble that you really like both.
7.5
Cultured Vultures is a pop culture website established in 2013 covering all things gaming, movies, and more. We eat your words.
All The News On The Biggest Games