Is The Gunk Coming To PS5? 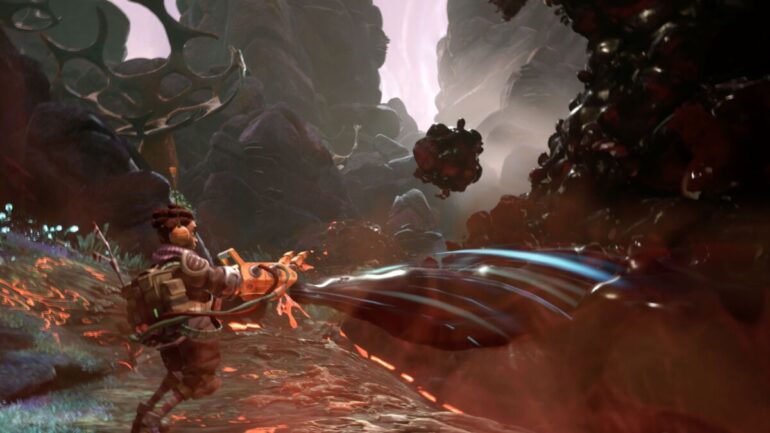 In among a flurry of announcements for the Xbox Series X | S and the Xbox brand as a whole, the reveal of The Gunk seemed to fly under the radar for many. Billed as an Xbox exclusive, is there any chance that The Gunk will also come to the PS5?

The Gunk is the newest game from the brains behind the excellent SteamWorld series that’s been on Image & Form Games’ agenda since 2017 with the release of SteamWorld Dig 2. The Gunk will be the team’s first fully 3D game, a third-person action-adventure that looks like it could take a lot of people by surprise. Here’s what it’s all about:

“The Gunk is a game about two friends who run a small scavenging outfit together, and who travel from one space rock to another in search for resources they can harvest and sell. One day they land on a planet that looks dead from a distance, turns out to be unlike any other they’ve set foot on. A slimy parasite­ — or gunk — covers vast areas and seems to corrupt the otherwise vibrant nature and wildlife. It’s clear that they must fight this gunk to understand what’s happened and to save the dying planet. But this also creates a rift between them; on one hand, the planet will die if we don’t rid the planet of the gunk. On the other, we’ve got problems of our own and surely this isn’t our fight to begin with. So, who cares… right? Do we have to?”

The Gunk will be arriving in late 2021 for PC, Xbox Series X | S, and Xbox One, but is there any chance it will come to PS5, or maybe even the PS4?

Well, while you should never say never, it seems that The Gunk is an Xbox “exclusive in perpetuity“, which means that will forever be an Xbox exclusive and basically up to Xbox whether or not they want to relinquish their rights.

It’s very unusual for exclusives from third-party developers to remain exclusive forever, especially these days when timed exclusives are all the rage, but it seems like The Gunk will never make its way to a PlayStation system, or even the Switch.

However, exclusive doesn’t always mean exclusive. Ori, for instance, always seemed to be destined for Xbox consoles only but was later ported to the Switch. In addition, a lot of first-party Sony titles for the PS4 were billed as entirely exclusive before belatedly making their way to PC.

So, while it seems unlikely that The Gunk will be going elsewhere, there’s always the chance that it could.

READ NEXT: Will Scorn Come To PlayStation 5?