Why We Need To Embrace The Godfather’s Biggest Goof

Even the greats remind us that we're all just humans at the end of the day. 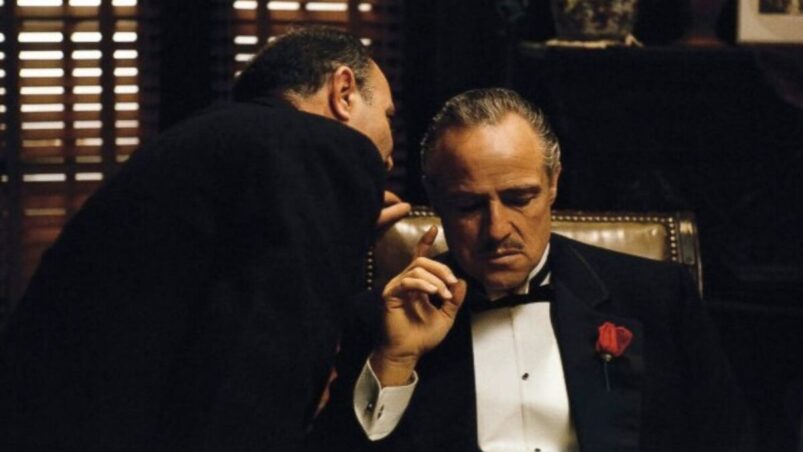 The Godfather turns 50 this year, and to mark this milestone, Paramount Pictures has released a 4K restoration of Francis Ford Coppola’s crime epic for a limited run. Like any self-respecting cinephile, I went along to one of these screenings last weekend, and for the first time in my life, I witnessed some of cinema’s most iconic moments unfold on the big screen.

Funnily enough, this last moment is probably my favourite of the bunch, which is something most Godfather fans – heck, most movie fans, period – will baulk at. After all, Sonny throwing a punch that very clearly misses the jaw of his brother-in-law Carlo would be a hard goof to forgive in any movie, let alone one with The Godfather’s near-universal level of acclaim. Why would I enjoy seeing this embarrassing mistake blown up on a 45-foot screen, considering it’s one of the few obvious blemishes on an otherwise perfect film?

Certainly, it’s not because the goof in question looked any less obvious magnified on a far bigger screen than what I have at home. On the contrary, when you’re watching Sonny’s curb-side beatdown of Carlo projected in ultra-high resolution in a movie theatre, there’s no getting around just how big a foul-up this is. James Caan swings a mighty right hook, there’s an audible “whack!”, Gianni Russo recoils from the blow, and all the while, there’s about six inches of daylight between Caan’s knuckles and Russo’s chin. Objectively speaking, it completely ruins a terrific scene.

And I’ll admit, my immediate reaction to Sonny’s phantom punch was to wince. My eyes quickly flicked from the screen to my girlfriend sitting next to me, watching The Godfather for the very first time, silently imploring her not to mentally check out on the film based solely on this glaring blooper. “Don’t let a single goof ruin the whole experience for you,” I pleaded with her, in my head. “Don’t let it spoil the rich performances, the weighty themes, the lush cinematography, or the haunting score.”

It’s a spiel pretty much every Godfather devotee has rattled off at least once in the half-century since Coppola first adapted Mario Puzo’s best-selling novel. Some pop culture commentators (like the hosts of the Rewatchables podcast) have even advocated Coppola using modern visual effects technology to seamlessly close the gap between Sonny’s fist and Carlo’s face. It’s an easy argument to get behind.

Not only would it fix a mistake (rather than altering an intentional creative choice), but it would also spare the Godfather faithful from ever having to defend this scene when showing the movie to potential new converts.

Yet despite the obvious merits of this argument, I remain firmly in favour of The Godfather being left exactly the way it is, warts and all – which brings me back to my original question: why do I appreciate Sonny’s phantom punch so much? If I’m being honest, my reasons are selfish. There’s just something I find oddly comforting about a movie as esteemed as The Godfather containing such a flat-out foul-up.

I don’t mean that in a malicious way. All I’m saying is that knowing one of the greatest films of all time – made by one of the greatest filmmakers of all time – still has visible flaws is a great reminder that all human endeavours (like the humans behind them) are imperfect. It helps put things into perspective, so that the next time I screw something in my own writing, I simply have to remind myself that even an artist as talented as Coppola didn’t always get things 100% right, either. What’s more, everything still worked out fine for him in the end – so maybe things will be okay for me, too.

That might not sound like much, but when you’re a writer sharing your work with the wider world, this perspective can mean a lot. Sometimes the feedback you get from readers hits as hard as Sonny’s right hook was supposed to collide with Carlo’s jaw – and stings just as much, at that. Just knowing that Coppola has copped far more grief over these few frames of Godfather footage than I’ll ever get for all my articles combined (even today, there are several snarky comments on the YouTube clip of Sonny’s phantom punch) and still went on to a glittering career is enough to keep me going on a bad day.

When I watch this scene, I’m reminded that like Sonny himself we’re all going to swing and miss at some point, but that doesn’t have to define who we are or what we’re capable of doing in the future.

So, I guess you could say that The Godfather’s biggest goof gives me hope. That’s not an emotion most people would typically associate with Coppola’s mafia masterpiece, but every time I see Sonny’s fist whoosh harmlessly past Carlo’s face, hope is exactly what I feel – and that’s why I love it so much.

READ NEXT: Make the Case: 5 of the Best Movies About Redemption