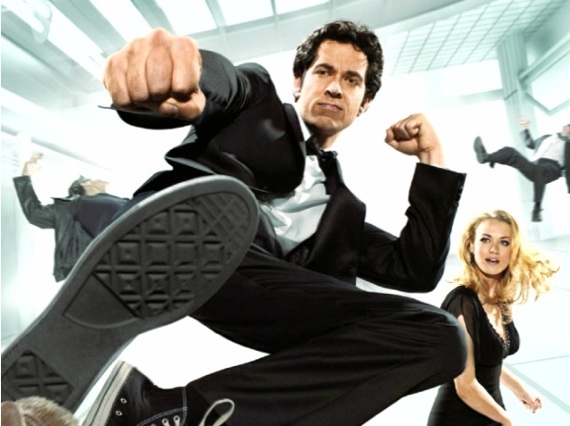 Lawrence Lancaster (or Cocktail to his mates) is a writer who’s just starting out. Here, he tells you why Chuck has the best soundtrack for any television series. Although he really sort of dropped a nut when he left out Frightened Rabbit…

When I first conceived this article some six weeks ago I hoped to be able to compile a list of my favourite soundtracks, however the notion has kind of been buried underneath my love for one of these. Chuck. As a result of revisiting some of my favourites I ended up spending the time I should have been writing, watching Chuck in its entirety and downloading the soundtrack as best as I could. Even the annoying/catchy fight music, you know the one…

The time spent digesting this collection of music could serve as evidence enough to convince you guys that the soundtrack is clearly brilliant, however for those of you who still need convincing. Here it goes…

The easiest way to judge a TV show is by the theme song, if you can think of a TV series and instantaneously hum the theme song it is arguably iconic, and worthy of your praise.  There are a few that pop to mind; One Tree Hill, How I met your Mother, Friends and who could forget Phantom Planet!

The theme song from Chuck is Short Skirt Long Jacket by Cake, a phenomenally catchy song. I find myself humming it now as I write, and it’ll probably remain in my head all day.  If you don’t believe me check it out:
[youtube=http://www.youtube.com/watch?v=u7aDstrDMf0&w=420&h=315] It is important to consider the creative influences that have allowed for the great soundtrack. In this case the two highly respected individuals responsible are; Josh Schwartz and Alex Patsavas. This combination gave birth to the OC mix tapes, which consequentially would have been second on my list, if hadn’t gotten distracted. The onus was to maintain the same theme as the OC; interesting, up and coming indie bands intertwined with older songs, which form to create pathetic fallacy within the show as well as acting as an extra character in some instances. The key difference between the two soundtracks is the location.  Whilst both shows are California based the rich, windswept beaches of Newport could never have the same soundtrack as Burbank, Buymore and spy missions. Hence a balance between the frantic escape music, Cobrastyle by Teddy Bears, and the more poignant occurrences in Chuck’s life form a balance that was lacking from the mostly chilled out surfy vibe in the OC.
[youtube=http://www.youtube.com/watch?v=LMKsY4wzoxY&w=420&h=315]

So much energy, so much Cobra

These poignant moments provide some of the best frames of reference for the brilliance of the soundtrack. A word of warning. That word is SPOILERS.

The soundtrack often foreshadows or depicts the characters emotions, mostly Chuck, but as the title character this is to be expected. My favourites involve the sadder moments; for example when Charles Bartowski is murdered by the devilishly handsome Agent Shaw; October Song by Nico Stai followed by Daddy’s Gone by Glasvegas. It brings a calm tranquillity to a major surprise within the storyline, providing a contrast that makes the event all the more traumatizing.
[youtube=http://www.youtube.com/watch?v=OaB3ZoJZlTY&w=420&h=315]

This ingenuity is also reflected in the happy moments, most notably for me Ellie, Chuck’s sister, walking down the aisle with Christmas TV by Slow Club playing in the background. The chanting of ‘Just Come on home’ echoes the reunification of the Bartowski family, which is well deserved after a couple of seasons of fighting bad guys.
[youtube=http://www.youtube.com/watch?v=9E1hCYVTvZ4&w=420&h=315] Finally there is an element of cheese that comes in every now and again, which is not to be confused with the prime placement of classic songs. The inclusion of Jeffster provides a method of including cheesy numbers without watering down the rest of the soundtrack. From performing Push it, whilst Ellie is in labour, to ruining her wedding with their rendition of Mr. Roboto, Jeffster provides a comedic outlet to serious events happening in the show. Especially at the wedding, which is crashed by an evil Chevy Chase.

For me the final factor that puts Chuck over the top is their dedication to supporting excellent music talent. Through the likes of Seattle based Subpop records and other smaller music distributors, bands were given a chance to feature on both Chuck and the OC, and as a result bring their music to the masses without the crippling tiredness and expense that comes with touring. This is evident through analysing the bands used, most of which I had never heard of before writing this article, but that may be a reflection of my own ability to find music. Damn you pitchfork.

Ultimately Chuck wins due to its ability to balance, it balances the emotion of its characters and accurately depicts the melting pot that is created through Chuck’s regular life and his exciting spy life. It is evident that Josh Schwartz and Alex Patsavas have a passion for music and that is what comes through, pushing it over the top, making it the best television soundtrack.

You can find Lawrence at www.facebook.com/lawrence.w.lancaster?fref=ts