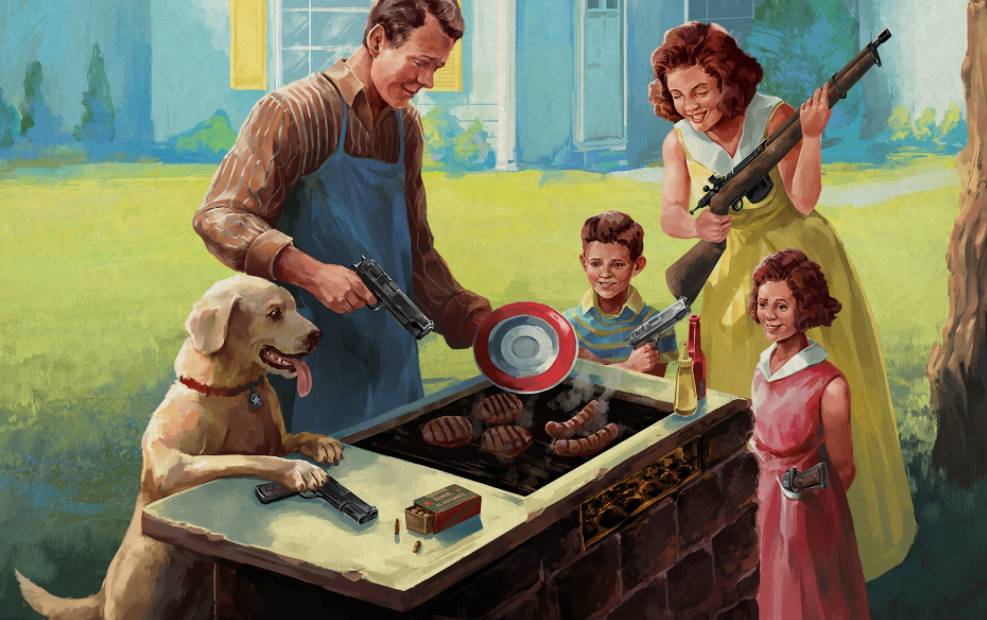 The release of The American Dream is either poorly-timed or a masterstroke depending on your outlook. With the current restlessness around gun control in America, it’s sure to at least ask some questions. Sadly, rather than condemning the state of guns in the United States with nuance, the way in which The American Dream gets its message across is so on the nose that it may as well be a blackhead.

I won’t confess to know a great deal about gun legislature and the lobbies surrounding them. As a Brit, I was able to appreciate The American Dream’s dark humour, often catching myself laughing at something I really shouldn’t. For some Americans, however, Samurai Punk’s satire may just rankle or come across as deeply insensitive, owing to the tragedy at Marjory Stoneman Douglas High School not even a month ago.

But you don’t get anywhere in life if you don’t take risks, so, in my eyes, it’s commendable that Samurai Punk would even go there to begin with. I am no fan of guns, so I should be the ideal audience for The American Dream. While the experience is fresh, it’s a wonderfully funny and irreverent game, but once the ideas seem to dry up and it overstays its welcome, it devolves into a shooting gallery where there are more lectures than ammunition. 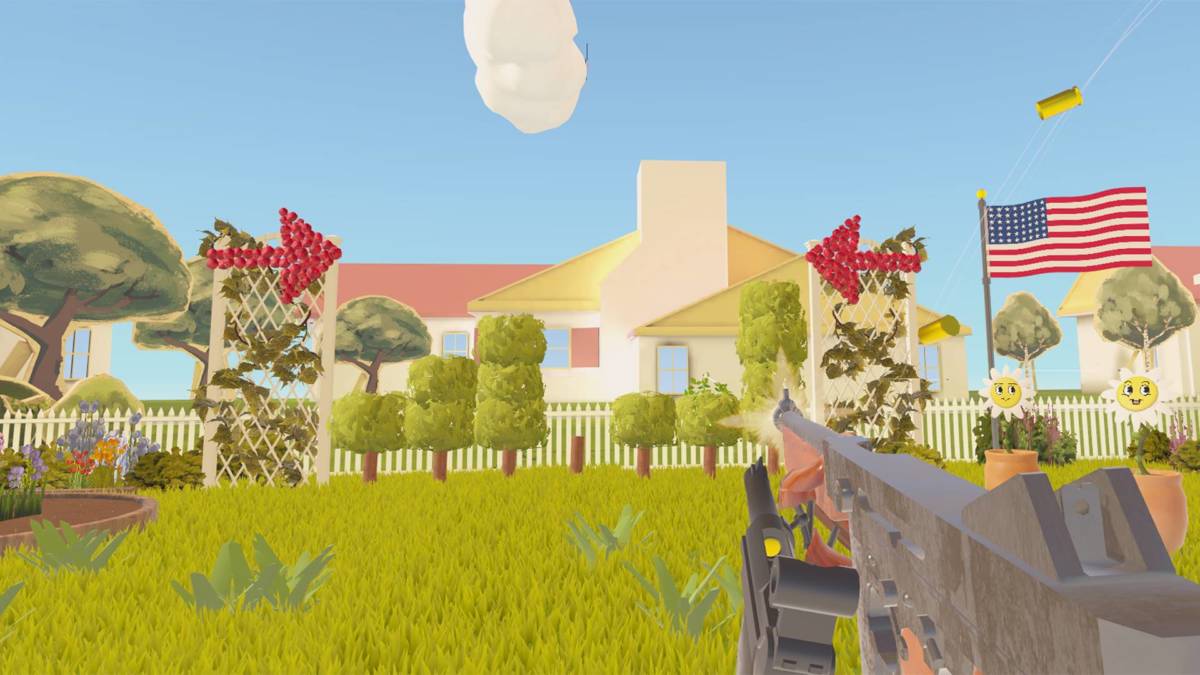 The American Dream starts off strongly enough and makes a knowing nod to it being in virtual reality by taking you through a VR tour. Your guide, Buddy Washington, is a golden retriever who sardonically take you through life as an American citizen in a timeline where the NRA (referred to as the ARA here so the ghost of Charlton Heston doesn’t appear and start rapid-fire suing) are omnipotent and everybody uses guns, even babies. Need to eat what’s on your plate? Gun. Flipping burgers at a low-wage job? Gun. Want to make the sex? Gun.

Almost every interaction in The American Dream revolves around a gun and shooting something. While this can lead to some funny situations in the short-term, like “shooting” your potential love interest to ask her out, it gets rather tiresome towards the end of the game. This may have been the intention of Samurai Punk –to take some of the glamour out of gunplay in video games– but that would be at odds with the design choice of slo-mo when reloading your gun for the full John Wick effect. It plays as if they tried to find a middle ground between fun and ethics lessons and came up short. 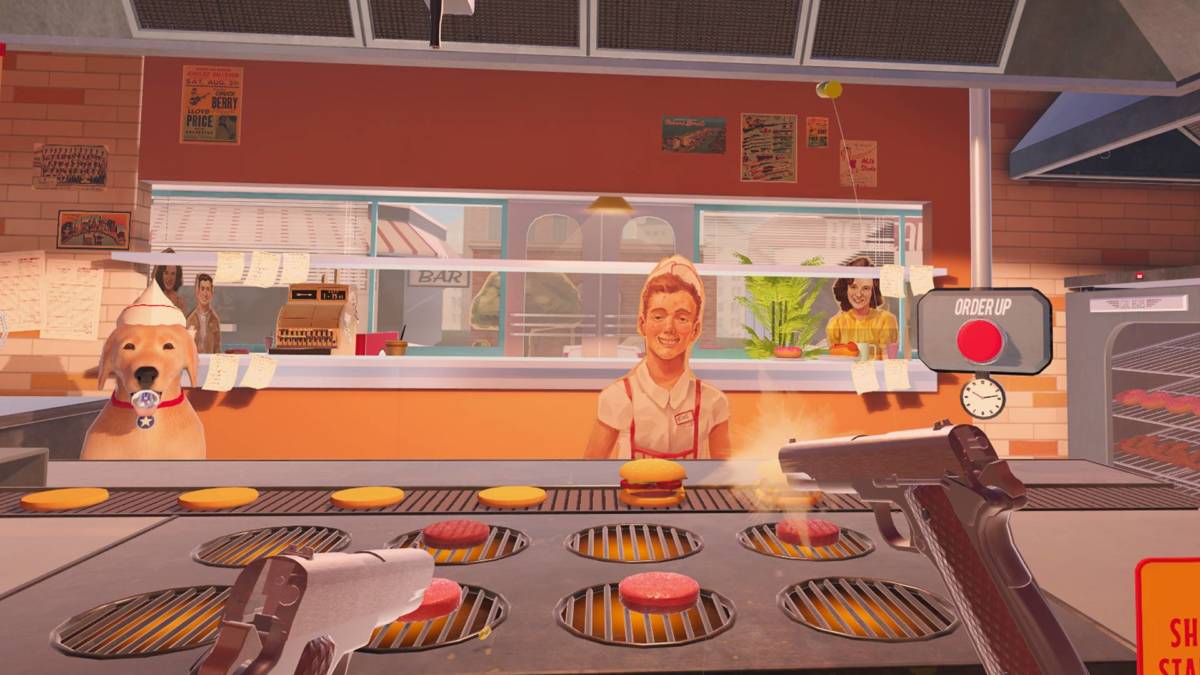 The gunplay itself is functional, though ultimately hamstrung by the PSVR’s inconsistent tracking. No matter how much I have reconfigured my settings or adjusted my surroundings, there’s always been issues when looking upwards in first-person games. The American Dream was no different with the guns controlled by the Move controllers routinely “ghosting” when pointing upwards. I could finagle it to work without much fuss as there are few time constraints or failure states in the game, though my patience was tested during a sniping section that was like pulling teeth to try to line up the right shot without the tracking wobbling all over the place.

What’s not on Sony and rather on Samurai Punk, however, is the bevy of bugs that may repeatedly take you out of the game. There were three times when I had to restart sections because I couldn’t reload my gun and another when the sequence just didn’t kick in at all. I had grown jaded by The American Dream’s tireless barrage of satire by its latter third, which the glitches just helped to reinforce. They’ve said they are working on getting these fixed, so if you’re reading this a month beyond release, you may not encounter the same hiccups. 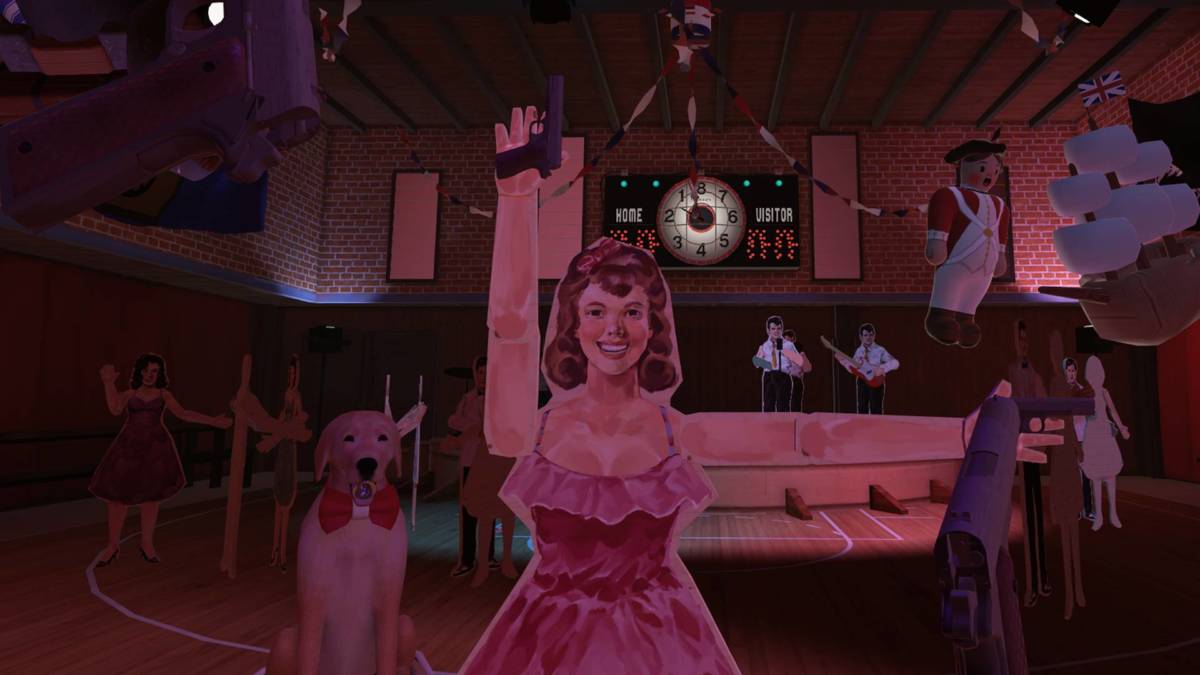 To the credit of the developers, The American Dream has some varied and inventive ways of using its many guns. A prom section which wears Americana influences with pride has you matching the dance moves of your date while also firing your guns, like a terrifying vision of Dance Dance Revolution. At another point, you must cut the hair of waiting customers in the midst of a Communist attack with an automatic rifle. If nothing else, The American Dream is certainly a trip.

The game’s commitment to its aesthetic is certainly a plus point as it depicts the period of American prosperity created by advertisers mixed with some truly offbeat imagery, like a waiter clearing your table with a shotgun. If you appreciate the art style of Fallout, you’ll feel at home here. A few of the early jokes and situations are also great, so you are bound to find some enjoyment in The American Dream, even if not for the whole distance. 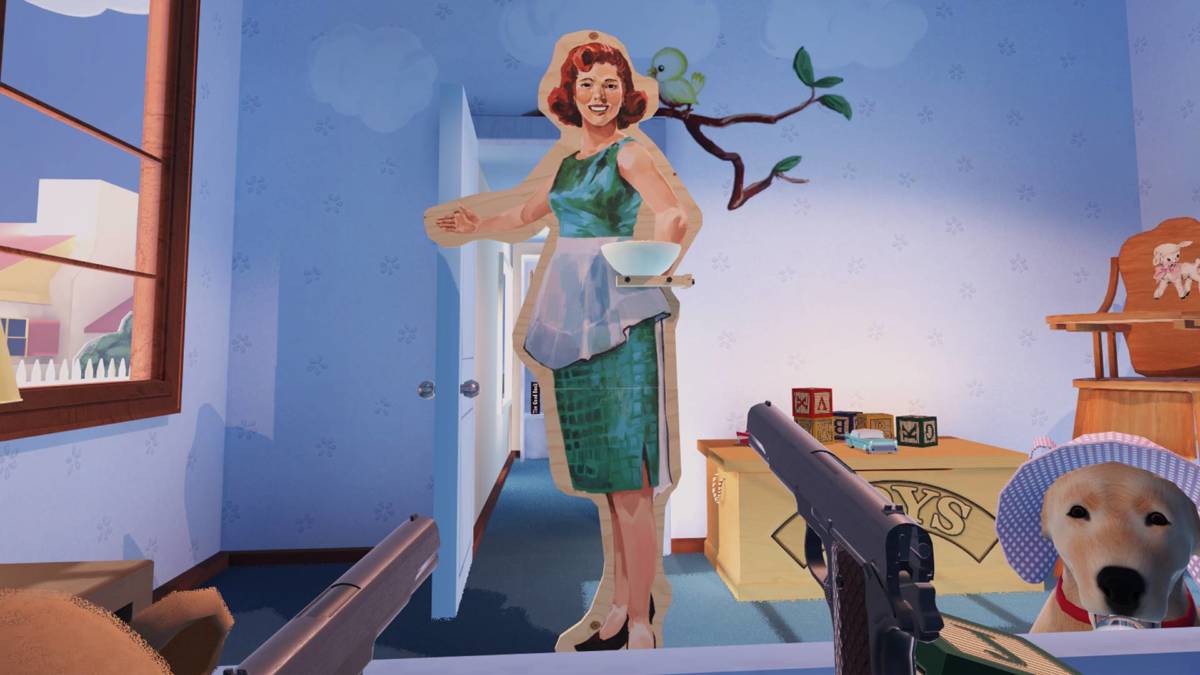 The American Dream isn’t a long game, but it still feels needlessly padded out. New scenarios take an age and a day to get underway, which is great for the more leisurely gamer. Rather obnoxiously (and somewhat naively), the game will make you sit and listen to how the NRA took over America in Buddy’s slow, exacting way. This might be more effective for the unconverted, but I just found it be condescending and the epitome of The American Dream’s worst habits.

By the time the credits rolled, I just wanted to wake up from The American Dream. It’s easy to appreciate what they were going for, but with such a heavy-handed approach, Samurai Punk have just created a game that’s going to cause division. Add bugs, repetition, and some lethargic pacing to the mix and you have a tedious VR game that’s a harder sell than gun control itself.

Verdict
Far too blunt with its message to be taken seriously, The American Dream's increasingly grating brand of satire becomes its downfall. Microtransactions: none
6