How Superman And The Authority Evolves The Idea of Superman

A super change for Supes. 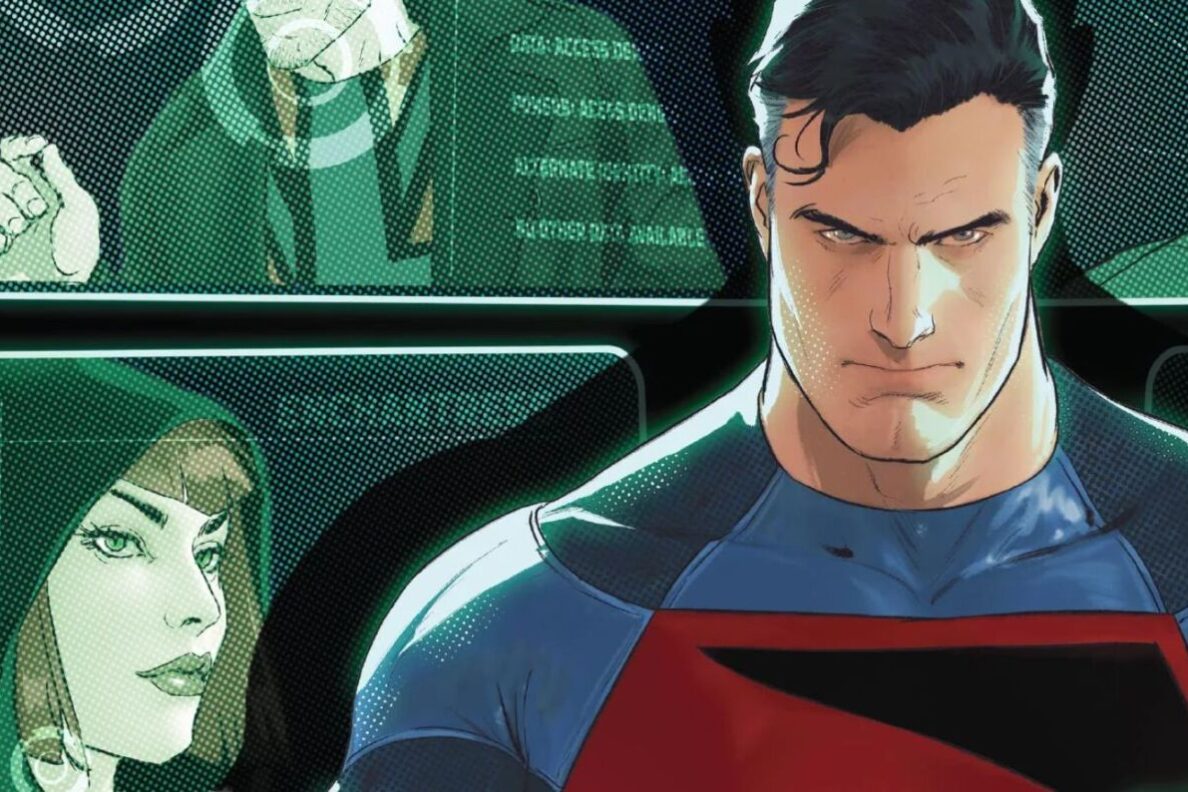 For more than 80 years, Superman has represented the superhero archetype in its purest form. He’s billed as “The Man of Tomorrow”  because he’s the ultimate distillation of what we aspire to be physically, intellectually, and morally. Or at least, as a lifelong Superman fan, that’s what I’ve always believed. Yet after reading a recent interview with legendary comics scribe Grant Morrison, I’m not so sure anymore.

Discussing their latest (and last ever) Superman story, Superman and the Authority – co-created with artist Mikel Janin and colourist Jordie Bellaire, among others – Morrison suggests the unthinkable: that as the 21st century marches on, the Man of Tomorrow has at long last become the Man of Yesterday.

This isn’t a take you’d expect from the writer who famously declared in 2011’s Supergods that “Before it was a Bomb, the Bomb was an Idea. Superman, however, was a Faster, Stronger, Better Idea.” Is Morrison’s final word on the Superman Idea that it has been superseded by something even faster, stronger, and better?

It certainly seems that way, and what’s more, a closer reading of Superman and the Authority makes it clear that this wasn’t just necessary – it was inevitable.

Who is Superman in Superman and the Authority?

The Superman of Superman and the Authority is markedly different to the one we’re used to.

In place of the youthful, nigh-invincible Adonis we’re used to seeing, this limited series presents us with a Man of Tomorrow who’s getting on in years. Superman’s jet-black hair is now white at the temples, and his godlike powers are starting to fade. He’s not as fast or strong as before, his enhanced senses have dulled, and he can barely levitate, much less fly. He’s also ditched his iconic costume, instead sporting a more practical, cape-free outfit better suited to down and dirty brawling or performing experiments in his futuristic lab.

The impression we’re left with is of a broad-shouldered, slightly over-the-hill scrapper who evokes the character as he first appeared back in 1938, as well as even older pulp hero Doc Savage, a direct influence on Superman creators Jerry Siegel and Joe Shuster when developing the character. All of this is intentional on the part of Morrison, Janin and Bellaire – to quote Morrison, their Superman is “the singular, the hero of the 20th century, the sovereign human” made manifest. He should feel slightly anachronistic, like the aging embodiment of a bygone era.

That’s not to say that Superman and the Authority presents the Superman Idea of a lone, two-fisted champion of justice as entirely outmoded. Sure, it’s an idea rooted in the ideals of the last century, but Superman nevertheless represents the very best and most timeless expression of those ideals. As President John F. Kennedy (yes, JFK) observes during the mini-series’ 1960s-set prologue, Superman stands for progress, hope, and the future – and he does that by being superhuman, honest, and intrepid.

These are positive values and qualities, and they result in a superhero who projects unfailing confidence (but never arrogance or belligerence), radiates tolerance and understanding (he’s comfortable using gender-neutral language), and balances optimism with a healthy dose of pragmatism. Sure, Superman is an old dude, but he’s the kind of old dude you want to spend time with.

Yet for all this, Superman and the Authority ultimately boils down to one question: if Superman (and by extension, the Superman Idea) is so great, why isn’t the world a better place?

Why Hasn’t the Superman Idea Made the World a Better Place?

If that question seems needlessly accusatory, it’s also undeniably valid: after almost 84 years fighting to build a better world, Superman hasn’t made any appreciable headway. The DC Universe is as much of a battleground for the broadly-defined forces of good and evil as it ever was. As for the Superman Idea inspiring fans to aim higher in the real world, a quick scan of the latest news headlines provides ample evidence (if any was needed) that this hasn’t happened either.

Setting aside nostalgia, the verdict is obvious: Superman is an abject failure. When confronted with this by reluctant ally Manchester Black – who contends that at the peak of their powers, Superman and his crime fighting buddies in the Justice League could have made a difference but didn’t – the Man of Tomorrow agrees. Superman chalks their failure up to the moral certainty that underpins the Superman Idea at the heart of not just Superman, but all his colourful contemporaries, too. “We were so certain we were winning,” he says. “We thought we didn’t have to try.”

Certainly, there’s some truth in this, but it’s not the whole story, either – because it overlooks another, equally valid truth: Superman was doomed to fail from the start.

Like JFK, Superman symbolises a great idea that simply doesn’t work in its present form. JFK’s real-life Camelot ended in tragedy just like Arthur’s mythical Camelot which inspired it – and both were attempts at collective action spearheaded by a powerful, charismatic, flawed individual. Why should Superman’s 80+ year stab at Camelot be any different?

There was a time when the 20th century ideals and qualities that Superman represents – the singular, individual force for change – could make a difference (or at least, it felt like they could). Superman and the Authority makes it clear those times are over, and pitting Superman against distinctly modern 21st century threats he’s not equipped to deal with makes the case that a new kind of superhero – and a new kind of idea – is needed.

This sentiment is what drives Superman in Superman and the Authority. Not only is he racing against the clock to deliver the better world he promised everyone before his powers fade forever, but he’s actively searching for his replacements, too. Just as pulp superheroes like Doc Savage gave way to the better idea that was Superman, now it’s time for Superman to give way to a newer generation who represent a better idea than he does.

In Superman and the Authority, Superman assembles a team of younger superheroes – including Steel, who Morrison describes as the Tom Strong to Superman’s Doc Savage – and essentially has them brainstorm what the Superman Idea 2.0 could be. He applauds them for their greater commitment to social issues, and despite his own code against killing, doesn’t admonish those in the group who employ lethal force, instead challenging them to find creative solutions to playing executioner. Above all else, he fosters a culture of them effecting change as a team and as society, not as individuals, and then – in the most shocking moment of all – he steps back from the costumed adventurer game.

Okay, not exactly. By the end of Superman and the Authority, the Man of Tomorrow is still very much on the scene, playing mentor to his fledgling team as they prepare to embark on their first, suitably cosmic practice run. But when the big climactic showdown between Superman and the main villains of the story – Ultra-Humanite and Brainiac – arrives, he simply opts out. Weary of the “repetitive shadowboxing” of superpowered slugfests, of following the same, decades-old template for conflict – once novel, now tired – Superman calls it a day, willing to accept that the idea he represents can’t make a lasting difference here.

He leaves his opponents temporarily stymied yet not outright defeated, trusting that his young team – as well as his son and direct successor, Jon Kent – will figure out a new, more inventive way of beating them than he ever could. Heck, Superman even suggests his young recruits might find a way of working with ruthless artificial intelligence turned overzealous conservationist Brainiac, underscoring just how much the Superman Idea 2.0 departs from the individualist, “punch it out” mentality of its predecessor. What’s more, Superman’s decision not to deal with Ultra-Humanite and Brainiac himself reflects his faith that the fresh perspective of this new breed of superhero – which includes people of colour and members of the LGBT+ community – can devise solutions that wouldn’t occur to him as a straight white male.

And that’s ultimately what makes Superman passing the torch in Superman and the Authority equal parts necessary and inevitable. For as long as the Superman Idea accurately reflected who we are and what we aspire to be, we needed it. When those things changed (as they were always going to do), the Superman Idea needed to change, too. We don’t quite get to see what form it will take next in Superman and the Authority, since it’s still gestating. But the promise of the Superman Idea 2.0 – an even better version of the self-sacrificing, heroic ideals that have inspired millions – is nevertheless tantalisingly within our reach.

In this sense, Superman and the Authority isn’t a takedown of the Superman Idea, but rather a celebration of it – not just what it is today, but what it could be tomorrow, too.

READ NEXT: Superman Is Still Relevant, Now More Than Ever