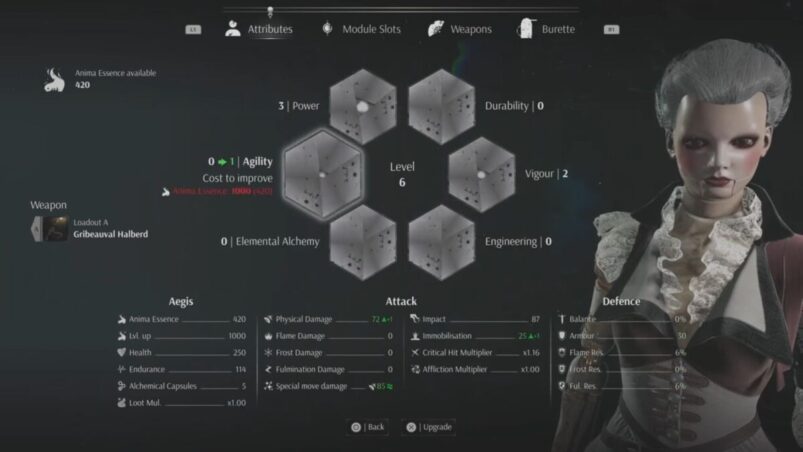 Steelrising is a unique soulslike from developer Spiders that places you in a fantasy-inspired revolutionary Paris. You are Aegis, an automaton who serves only the Queen and must defeat the rest of her clockwork robot kin. The game has a dynamic stat system, but the numbers and certain values can be a bit vague even when looking for clues in the in-game guide. In this guide, we’ll go in-depth for the Agility stat as it is one of the paths Aegis can focus on for the entire game.

Agility as a stat in Steelrising serves as one of the cornerstones you can build Aegis around. Putting an upgrade point into the stat from the upgrade menu at Vestals you find will cause it to increase various other stats in addition. While some of these are easy to understand, such as increases to your attack damage and special move damage, it also increases a stat called Immobilisation.

This is an important stat to take note of, since it determines how much your attacks increase the Immobilisation meter of enemies. The higher the stat, the faster this bar will fill up and allow you to execute devastating Immobilisation attacks. You’ll know when your foes are ready for them because they’ll stop moving and the diamond meter that appears over them will become red. These attacks are the bread and butter of Agility-based offense since the weapons that complement the build are fast and tend to hit multiple times.

You will be able to tell which weapon is useful for which of the 3 specializations in the game (Agility, Power and Alchemy) by looking at the affinity grade for each specialization under the damage count of any weapon. Though some weapon types, such as Batons, have low Agility affinities, they can still be useful for one-off hits. Especially if they’re infused with elemental power.

The best ways to complement an Agility build are to make sure you can take advantage of its multi-hitting nature and lacking defenses. Defenses can be compensated with weapons that allow you to block using the Block ability such as the Armoured Fans, but weapons that have the Counter ability are far more useful to the build overall, especially since the window for retaliation is much larger after a counter. Eschewing defensive options entirely is also a valid option by packing plenty of Endurance Vials to make sure your Endurance meter never depletes, allowing you unlimited dodges for a time.

Along with Endurance Vials, Agility-based players will find a handful of consumables that cover your blind spots useful to leverage a win. These include Frost and Petrification grenades that will stop your opposition in its tracks. Petrification grenades are especially useful when building around Agility, as they attack the enemies’ Immobilisation meter directly. This means enemies that force you to dodge or can run away themselves can still be Immobilised, even if you can’t land that last key blow.

Agility also finds itself frequently mixed with Alchemy. Weapons such as the Franklin Claws and Frost Fans are found very early in the game at the Boutiques in the Vestals you find, which come with attacks that infuse the weapon with elemental power rather than any defensive capabilities. These weapons are fantastic for an aggressive, all-out attacking playstyle as you will be able to switch freely from enemy to enemy while leaving status afflictions on them. While this strategy takes some practice, it allows Agility to be the versatile build in the game.

The Agility build in Steelrising can be a difficult one to get the hang of at first, but one will easily find themselves discovering the reliable ways to dodge and attack in a fluid manner. Towards the end of the game it can become particularly powerful with some of the gear you can find and buy, especially if you choose to forego defensive options for pure offensive power. Though it has a bit of a learning curve, the Agility build is a reliable one that can take full advantage of some of the more dynamic methods of attack the game has to offer.