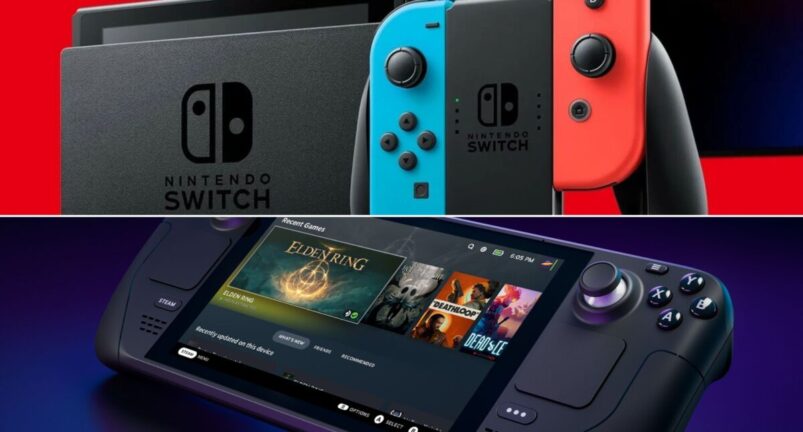 Nobody can deny the impact of the Switch or its importance since it first launched in 2017. From basically re-energising traditional portable gaming in the face of the mobile industry to proving that not all AAA games have to be cut from the same cloth, the Switch will go down history as one of the most vital, significant systems in history.

But “history” is exactly what the Switch is beginning to feel like over five and half years on from that huge launch, especially in the face of what Valve’s more modern Steam Deck can provide. Every dog has its day (including those Nintendogs), but now it’s starting to feel like the Switch is the Old Yeller to the Deck’s Lassie.

The biggest sign of age with the Switch, of course, lies on the technical side of things. The Switch has always been somewhat overpowered, its Tegra X1 processor nowhere near the top of the line even all those years ago, but its lack of power is even more evident in almost every big new release of 2022, with the system struggling to match modern game design ambitions. The Switch chugs and wheezes, just about getting the job done. Playing something on the Steam Deck and then trying the same game on Switch feels like stepping back a generation. As someone who owns both systems, I can really only see myself playing exclusives on the Switch ever again.

Developers work well within the system’s limitations (for the most part) thanks to upscaling and clever asset optimisation, but from a sheer resolution and framerate performance, the Switch is increasingly lacking. Though a step up from its predecessor, the recent Xenoblade Chronicles 3 dragged itself over the line at 540p with a framerate cap of 30fps with some rather flat environmental textures, jagged edges and regular framerate hiccups. Meanwhile, games like Fire Emblem Warriors: Three Hopes feature some truly uncanny compression to stop the Switch spluttering, though it still does just that during hectic combat. Then there’s WRC 10, a port so compressed that it’s basically deep fried.

You have to wonder how next year’s Tears of the Kingdom will fare, especially as it’s expected to be an evolution of Breath of the Wild, which already felt like it was pushing the Switch to its limit at launch.

Compare this to the Steam Deck, which somehow allows you to play games like Marvel’s Spider-Man and God of War as if someone shrank down a PS4 and put it in your hands. Then there’s the vast customization options and its open nature to consider that allow you to really tinker around. This is a system just getting started too, with developers only really properly embracing its FidelityFX Super Resolution (FSR) capabilities, which algorithmically upscales and sharpens the image to make it look higher resolution without hurting the framerate.

As for those framerates, you can expect a solid 60 across a vast amount of games on Deck without too much fiddling required. 60fps is the standard that the Switch feels a million miles away from for many of its games, especially third-party titles. While the Switch has the best third-party support in Nintendo’s history (pretty sure about 40 games released on it as I wrote this), many AAA publishers seem like they’re pulling away from the system, perhaps because the concessions required to make their growingly demanding games work on the Switch ultimately aren’t worth it, or just aren’t possible. The rise in cloud versions seems to suggest as much.

To be clear, nobody is asking Nintendo to solder an RTX 4090 to an 8K display and try to go toe-to-toe with Valve, who sell each Deck at a loss, though the absolute kingdoms they can build with their CS:GO skin money no doubt helps. Nintendo just need to close the gap before the generational divide gets even wider, whether that’s with a Switch Pro or a whole new system. If Nintendo can remake and redesign the DS roughly 50 times, isn’t it about time the Switch got a little makeover too, even if it’s just a bit of lipstick against the prettier, younger competition?

Whatever Nintendo make next, hopefully it can match the speed of the new F-Zero game of our dreams.

READ NEXT: The Best Switch FPS Games You Should Play