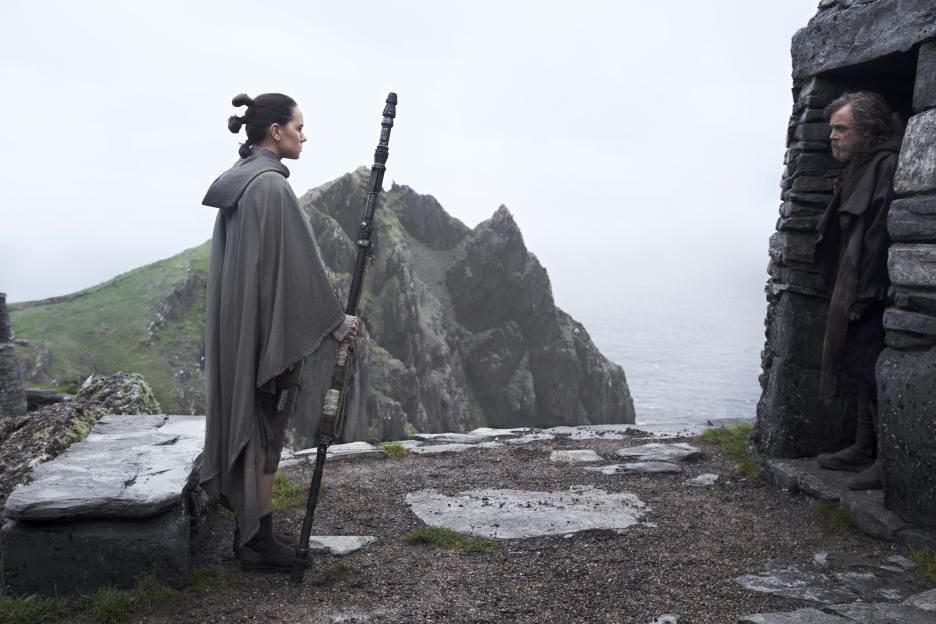 Note: the below contains the mildest of spoilers if you want to go into The Last Jedi completely blind.

Star Wars: The Last Jedi may or may not be the best film in the franchise, but what writer-director Rian Johnson has accomplished in the eighth installment of the Skywalker family saga gives hope to the recent announcement of a planned trilogy to come.

It goes without saying that one should enter a Star Wars film knowing as little as possible. There are those people who read everything they can about the films going in and those who decide to enter as blindly as possible. Aim for the latter because these new Star Wars films are a treat and Johnson doesn’t let us down.

When The Force Awakens concluded, Rey had just met Luke Skywalker and reached out to hand him the lightsaber lost following the battle with Darth Vader in Cloud City. Appropriately enough, Luke Skywalker takes on a larger role in The Last Jedi as Rey seeks to learn the ways of the Force. Whereas The Force Awakens was Han Solo’s film, The Last Jedi is Luke Skywalker’s film. The ninth film, to be helmed by J.J. Abrams, was to be Leia Organa’s film if not for her tragic and untimely passing.

Filmmakers were wise to not reveal so much in the trailers and TV spots–nobody wants to see the film be completely spoiled. Seeing Skywalker deliver the “it’s time for the Jedi to end” line is understood further in context on the big screen. This is the thing with not revealing much in trailers — it leaves a lot left to be uncovered and fans are able to truly experience a film.

In watching The Last Jedi, there’s a lot of sadness in knowing it’s the final on-screen appearance of Carrie Fisher in one of the most iconic roles for women. The film serves as a proper goodbye for General Organa with both new and old characters getting to say a goodbye to her in that respect. Fisher has served the role well and will truly be missed.

For Rey (Daisy Ridley), Kylo Ren (Adam Driver), Finn (John Boyega), and Poe Dameron (Oscar Isaac), The Last Jedi offers a chance to develop their characters further and in some instances, go into their backstory. What Johnson is able to do with these characters overall leaves one wanting more of them after the film ends — the best part is knowing it won’t be another three years before they return on screen given the two years of waiting in between the films. There wasn’t much of Dameron to be seen in The Force Awakens, but fans should expect to be satisfied by how much he has to do this time around.

As far as Rey and Kylo go, there’s a lot to be said in the growth of their characters with the Force. There’s also a lot that can’t be said about the two because it would get into spoiler territory and let’s be honest, nobody wants that. After two films in the new trilogy, a betting person would likely describe this trio of films as telling the story of Rey and Kylo. Rey was already seen as a kick-ass action hero, a role model for girls and young women everywhere, and The Last Jedi further cements that. She’s the heir apparent to Leia Organa in this regard. Adam Driver was made to play Kylo and his performance is even better this time around — he was made for Star Wars. The series belongs to them inasmuch as it does the previous generation.

It wouldn’t be a Star Wars film without a lightsaber battle and The Last Jedi has not one but two of them. The battle scenes, be it on the ground or in space, make for some spectacular visuals including one of the best this year.

For everything that has been said about George Lucas’ inability to write dialogue and whatnot in favor of visual effects, this problem has been righted in the new trilogy, which Lucas hasn’t been involved with at all. Whether anything Lucas suggested was considered as they plotted the course of the new trilogy is unknown, but it’s clear from the get-go that both Abrams and Johnson have a vision for where they want to take the franchise.

When all is said and done, Star Wars: The Last Jedi is the greatest Star Wars film since The Empire Strikes Back. Without having to worry about so many character introductions, the film goes right into the action and 2.5 hours later, fans will be clamoring for more.