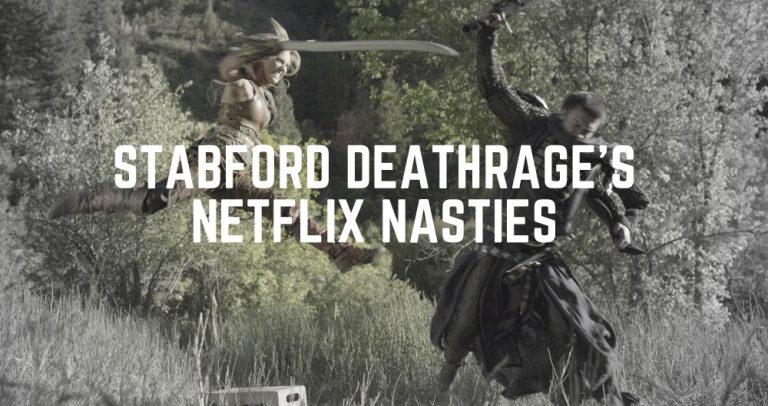 An elf, a cleric, and an orc battle the forces of evil in this dreary adventure film.

After a period of lengthy voiceover narration, a woman wearing a cowl and a complicated mask obscuring her face shoots down a computer-generated dragon with an unusually large crossbow. It’s revealed she’s an elf, and she chases down the injured orc that was riding the dragon.

After a promise of gold unfulfilled and a closeup of her phony contact lenses that will change color later in the film, she kicks him squarely in the wig. A tedious battle ensues, and you should get used to the idea, because there will be plenty of those. She then cuts the orcs head off. In a separate but related establishing shot, a guy wearing cumbersome armor climbs up an unlikely cliff for some reason.

The armored guy fights a loud-mouthed dwarf in a tunnel, and the dwarf explodes. Afterward, a green-screened hawk flies sort of majestically over a canyon. A band of orcs has a meeting where some plans are discussed, and they shift uncomfortably back and forth, and it’s probably due to the absurd and possibly accidental orc-on-orc sexual tension. Then there’s another extended fight scene.

Suddenly, across a salt plain, a woman dressed in gauze appears, and it looks like an ad for some expensive perfume. She telepathically compels the armored dude to travel to a distant computer-generated village in the mountains. The elf is jailed, and meets-cute with a creepy Gollum-type guy, and she chokes him out with her chains. Then there’s more fighting, picturesque scenes of mountains and valleys, and a protracted walk-and-talk through a meadow.

The armored dude and the elf join forces with an orc, and they bicker for a while. Then a partially computer-generated sea dragon puppet attacks, but it’s very brief.

The crew is attacked by some skeletal undead warriors, and that’s kind of sweet. A minotaur gets its arm chopped off and its heart torn out, and that’s alright, too. Then a boom shadow makes a cameo appearance as the elf meets some orcs at the crossroads like she’s a sword-wielding, guitar-less Robert Johnson. Then there’s more walking, running, climbing, riding, and sundry birds of prey, as an Enya-like soundtrack creates a disappointingly ethereal atmosphere. The orc is almost damply seduced by a mermaid named Mulva (I wish I was making that up), and he calls Mulva and her abruptly fanged mermaid entourage ‘water whores’ (I wish I was making that up). The only-slightly exploded dwarf attacks again, and he shoots a net-gun at the elf, which knocks her off a cliff a few times.

Curse Of The Dragon Slayer is another of those Dungeon And Dragon-type fantasy adventures where a disparate, contentious group of individuals not quite yet sued by the estate of J. R. R. Tolkien go on a long walk, and through their tribulations learn to coexist with one another, and it’s pretty cruddy. I’m sad to say that I’ve actually seen much worse, so it’s mildly recommended if you like stuff that sucks.

This film is also known as SAGA: The Shadow Cabal and Dragon Lore: Curse of the Shadow because reasons.